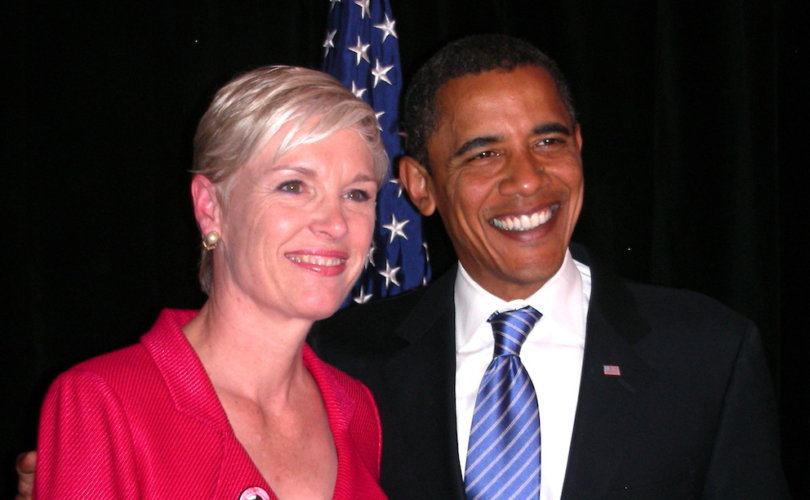 “Thank you @POTUS for 8 years of progress. #ThanksObama,” the abortion exec tweeted.

Richards heads the nation’s largest abortion business, which aborts some 320,000+ women’s babies per year, took $553.7 million of U.S. taxpayer money in Fiscal Year 2014-2015, and has been exposed for trafficking in the remains of children aborted at its facilities.

Planned Parenthood has had a fervent comrade in Obama, a two-way street of adoration.

The Obama White House has defended the abortion behemoth through its baby body part trafficking scandal – even going to so far as to thank Planned Parenthood in the midst of the scandal for its part in keeping Obamacare afloat – and acting to quash efforts to investigate or defund the abortion chain, as well as threatening states that take steps to do so.

Most recently Obama’s Department of Health and Human Services (DHS) came up with a new rule prohibiting states from blocking the abortion giant from getting  Title X grant money for reasons “unrelated” to its ability to provide family planning services, a move pro-life leaders call Obama’s “parting gift” to Planned Parenthood.

Obama was also among those publicly congratulating the abortion business on its recent 100th anniversary.

His allegiance to the abortion industry was known prior to his taking office, and further solidified by his rescinding of the Mexico City Policy prohibiting federal funding of abortion overseas upon taking the White House.

Obama’s abortion legacy was cemented by his Administration appointments and his two Supreme Court appointments, Sonia Sotomayor and Elena Kagan, and it has been litigated in court by the countless religious entities and closely held corporations fighting his HHS contraceptive Mandate.

Richards, who stated that the Little Sisters of the Poor religious freedom case against the Obamacare contraceptive Mandate consisted of hypocrisy, that defunding Planned Parenthood was “wasting both taxpayers’ money and the voters’ time,” and would “eliminate care for expectant mothers and newborns,” was lauded by Obama along with pro-abortion Congresswoman Nancy Pelosi at a White House Women’s History Month event earlier as a “superhero.”