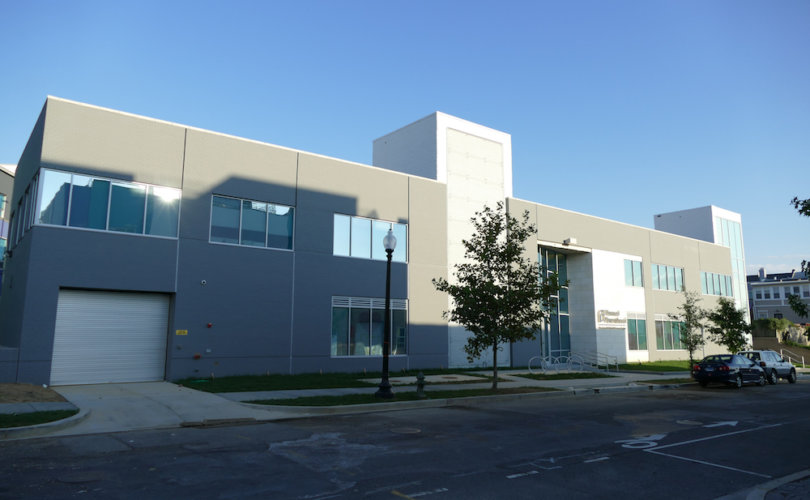 The Carol Whitehead Moses Center is Planned Parenthood’s new 27,000-square foot abortion facility in Northeast DC. The building replaced an old warehouse and takes up roughly half a street block. The Washington Post reported it cost nearly $20 million to build and it “will also serve as the administrative headquarters for Planned Parenthood of Metropolitan Washington.”

According to The Washington Post, the facility has six non-surgical exam rooms and four procedure rooms. Plumbing permits reveal it has an assembly line of 33 sinks.

The facility replaced a smaller, older clinic on 16th Street that was the site of pro-life protests for many years.

Since 2004, the abortion business has been opening large abortion “mega-centers,” according to Eric Scheidler, the executive director of the Pro-Life Action League.

“This is definitely part of a much larger strategy,” he told LifeSiteNews. “The first was built in Austin, Texas, and there was a huge public outcry” that included the refusal of local contractors to provide Planned Parenthood with concrete for the building.

Perhaps discouraged by that “initial problem” in Texas, Scheidler said, Planned Parenthood waited until 2007 to open its next mega-center, this time in the town where he resides, Aurora, Illinois.

“Planned Parenthood, realizing the problems that they had in Texas, decided to create a front company — actually, two companies — one company to buy land, one company to build their building,” he explained. “They lied to city officials, they claimed that they didn’t know who their tenant was going to be, they went to the state and said they were not-for-profit health service to get a tax bond [and] tax-free financing for the project.”

However, they told the city of Aurora that “they were going to be a regular for-profit, multi-use medical center,” said Scheidler, who called this a “stealth tactic to hide from the pro-life community” that Planned Parenthood “admitted” to engaging in.

At least 19 or 20 of these mega-centers have opened around the country, said Scheidler, pointing to cities like Denver, Portland, and Houston.

“We believe in some cases other abortion clinics have had to shut down because of the competition from Planned Parenthood,” Scheidler explained. “They’re really cornering a massive part of the market.”

Planned Parenthood trying to ‘cash in on the national healthcare system’

Scheidler believes Planned Parenthood’s reasons for its “mega-center” strategy is threefold. First, they want to “corner” the abortion market. Second, they are trying to build “state-of-the-art facilities that … can satisfy restrictions that pro-lifers have been able to pass on the standards at abortion clinics around the country.”

Their third and “very long-term strategy is to cash in on the national healthcare system.”

“Obamacare itself and things flowing from it, like the HHS mandate, are simply a bailout for the collapsing industry of abortion,” Pavone told LifeSiteNews. “These efforts, along with the Democrats' goal of repealing the Hyde Amendment, are aimed at increasing business for the industry.”

“I would not at all be surprised that one of Hillary Clinton's goals, if she were elected, would be to make Planned Parenthood an official entity of the federal government,” Pavone said. “That would help explain the arrogance with which they keep building.”

It “would be a massive boon for Planned Parenthood” if Clinton wins the presidency and overturns the Hyde Amendment, “opening up Medicaid funds for abortion,” Scheidler said. “Their revenue could simply explode.”

“Planned Parenthood, like the expert criminal enterprise they are, knows that bigger facilities [mean] more abortions and larger paychecks,” Kristan Hawkins, the President of Students for Life of America, told LifeSiteNews.

Furthermore, she said, “It’s disingenuous at the least for them to talk about how the lack of access to abortion hurts poorer communities when the president of Planned Parenthood is compensated over half a million a year, the abortion giant spends tens of millions of dollars on political activity, and then spends another $20 million on a brand new state-of-the-art abortion facility.”

Since pro-life activists learned of Planned Parenthood’s new location, they began a series of protests and outreach efforts.

Its construction site was home to demonstrations in the summer of 2015 by Created Equal, two 40 Days for Life campaigns, protests that have drawn hundreds, and a rosary procession hosted by the Archdiocese of Washington. There have been prayer vigils and a demonstration that blocked construction vehicles for several hours.

The facility was originally scheduled to open at the end of 2015. It didn’t officially open until the last week of September 2016. Pro-lifers protested its launch party, which featured actress Kathleen Turner, with images of women killed by legal abortion. The protesters flanked both entrances to $350 per person fundraising event, forcing attendees to confront the truth about Planned Parenthood’s butchery.

On October 4, the D.C. zoning board voted unanimously to dismiss an appeal for a public hearing about the facility. The public was never given the chance to comment on Planned Parenthood’s move.

It would be “a waste of time” to consider the appeal, board member Robert Miller said.

Nevertheless, pro-lifers have not stopped protesting. The now-open facility is currently the site of a 40 Days for Life campaign.

Lauren Handy, the founder of Mercy Missions, regularly sidewalk counsels at the Carol Whitehead Moses Center. In September, she spoke with a Planned Parenthood employee who didn’t know Planned Parenthood commits abortions. Handy showed her a photo of an abortion victim and “she quit on the spot and did not come back,” Handy told LifeSiteNews.

This inspiring story starkly contrasts comments a DC Planned Parenthood contractor made on camera in August. He told a group of pro-life protestors “I like” the Ku Klux Klan and that he would have no problem installing plumbing for an extermination camp.

Although it seems like the DC Planned Parenthood is winning by being allowed to remain open, pro-life activists like Reverend Patrick Mahoney have stressed that they plan to fight the facility for however long necessary.

And the grass directly in front of the DC Planned Parenthood — essentially its front lawn — is public property, as are the alleys surrounding it, meaning pro-lifers like Handy can continue to reach abortion-minded women.