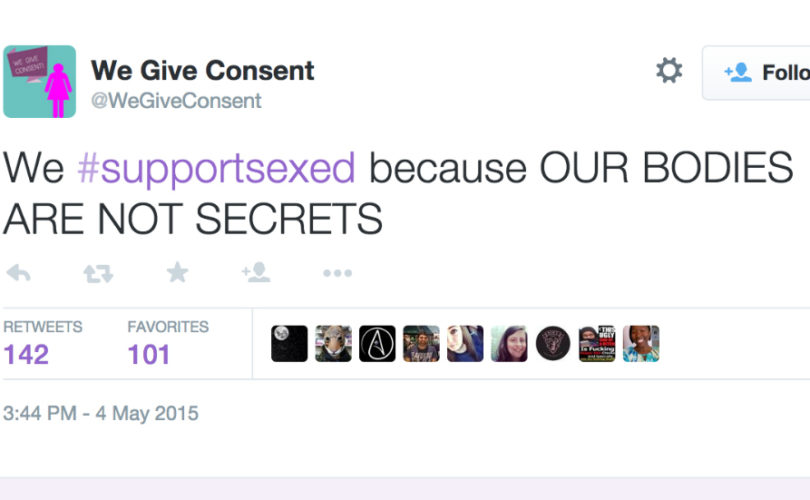 TORONTO, May 8, 2015 (LifeSiteNews.com) — Planned Parenthood Toronto put out a tweet earlier this week asking supporters to weigh in on why they support the Ontario Liberal government’s hotly contested sex-ed curriculum. But instead of achieving the desired effect, responses to the #SupportSexEd hashtag show why so many parents are absolutely right to be outraged over what the government intends to spoon-feed their children beginning this September.

The most shocking tweets came from Lia Valente and Tessa Hill, the 14-year-old girls used by Kathleen Wynne in January to promote the lesbian premier’s agenda of early sex-ed in Ontario.

We #supportsexed because OUR BODIES ARE NOT SECRETS

While it might not be obvious at first glance why Planned Parenthood is pushing the updated sex-ed, former Texas abortion clinic owner Carol Everett highlighted the startling connection between abortion and sex-ed during a talk last year in Ottawa. Everett stated that abortionists discovered in the 1970s that the best way to create a “market for abortions” was by teaching kids about having sex at the youngest age possible.

“My goal was to get them sexually active,” Everett said. If the sex-ed was done correctly, she said, then when a sexually active girl inevitably became pregnant — despite following ‘safe’ sex practices — she would turn to the abortion clinic as her first choice to deal with her ‘problem.’ This put money in the pocket of the abortion industry.

“How do you sell an abortion? […] You do it through sex education,” Everett stated.

Planned Parenthood Toronto is excited about having young children learn to give consent to sex through sex-education, tweeting in response to the young girls’ above tweet:

@WeGiveConsent YES! We love your work and everything you're doing.

The 14-year-old girls have become the front for a social media campaign called “We Give Consent” to teach students about giving “affirmative consent” when asked to have sex. The girls believe that the only way to end “rape culture” is to “create a consent culture.”

“We have to raise our generation in a culture where consent is a norm,” Valente said in a recent interview with Feminist Canada.

While many Twitter users tweeted their support for the sex-ed curriculum by highlighting how it will teach young people to accept homosexuality as normative, quite a few were pleased that it would teach young people how to say ‘Yes’ to having sex.

I #supportsexed because it fosters a culture of consent from an early age. @Kathleen_Wynne @WeGiveConsent

I #supportsexed because I believe that youth have as much right to enjoy and experiment their sexual selves as I do.

I #supportsexed because sexual assault is an epidemic and we need to create a consent culture.

For the grade 8 girls, having sex is “part of being a human” and they hope to learn about having sex until they are one hundred years old.

We #supportsexed because pleasure and desire is part of being a human and we need to embrace that!!!