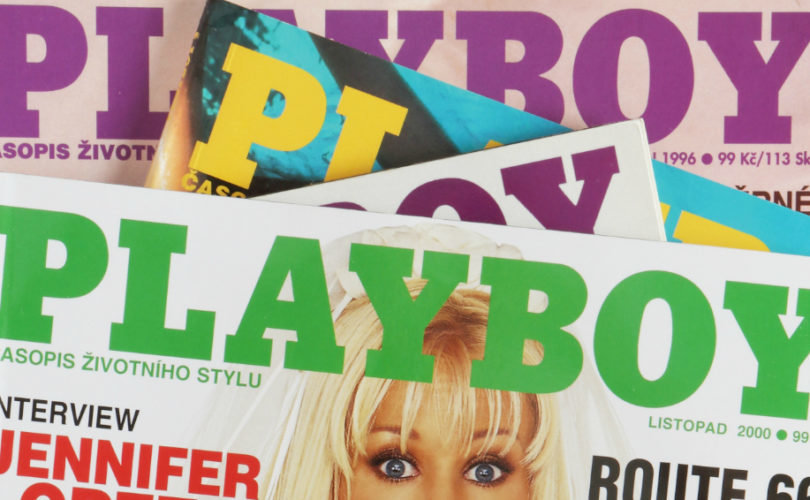 BEVERLY HILLS, California, October 15, 2015 (LifeSiteNews) – One  of the icons of the sexual revolution, Playboy Magazine, has knocked down so many barriers to prurience it can no longer compete. Rather than continue to lose $3 million a year as voyeurs desert its pages in favor of the Internet, the magazine has decided to stop displaying naked women, for 62 years its apparent raison d’etre.

“It is certainly ironic,” the executive director of the Pennsylvania-based Theology of the Body Institute, Damon Owens, told LifeSiteNews. “Playboy becomes victim to its own mistaken understanding of human sexuality.”

Playboy’s CEO Scott Flanders admitted that by championing sexual freedom the magazine had ultimately paved the path to such widespread free access of such obscene sexual images on the Internet that the magazine could not complete and at the same retain its high end advertisers.

Regular circulation has fallen from a peak of 5.6 million in 1975 to 800,000 today. “You're now one click away from every sex act imaginable for free. It's just passé at this juncture,” Flanders told the New York Times. The private company owning Playboy still makes money from the brand and its bunny-head silhouette, so keeping the magazine itself going makes financial sense, even at a loss.

“Hefner’s mistake was in believing and advocating that unbridled lust helps a person flourish,” said Owens, whose institute schools Catholics in Pope St. John Paul II’s teachings on sexuality and marriage.  Lust, he added, was a corruption of sexuality from its rightful role, to bring a man and a woman together in marriage.

“Lust is about a person bringing pleasure to himself or herself. You cannot have lust and love together,” said Owens.

“Eroticism rightly understood is the movement of the heart into the mystery of another person,” said Owens. But there is nothing mysterious, he added, about the full nudity delivered up by the pornography industry, which has reached  “pandemic proportions and is an attack on marriage, the family and the culture.”

Owens said that “Hefner promised us” that using pornography to knock down Christian sexual restrictions would improve relations between men and women, but the evidence is to the contrary. Pornography has made relations worse.

Don Warden, the executive director of Elizabeth Ministry International, a Wisconsin-based organization devoted to restoring Christian marriage through Catholic teaching, said the most serious impact of pornography on marriage—and all relationships—is isolation. “He made us male and female so that we could be connected by love as He is connected by love to us. Pornography goes right for that connectedness,” Warden told LifeSiteNews.

“Most men who bring themselves into recovery have never talked about pornography with another person,” said Warden. Meanwhile, “His spouse is left wondering why she finds herself all alone in the marriage. The children feel abandoned.”

Elizabeth Ministry not only speaks to church groups about sexual addiction but offers an anonymous website for those concerned with their own pornography use called Reclaim Sexual Health.

No more full nudes in Playboy? The horrifying story behind the headlines.

Life in the Playboy Mansion made me want to commit suicide: Hef’s ex