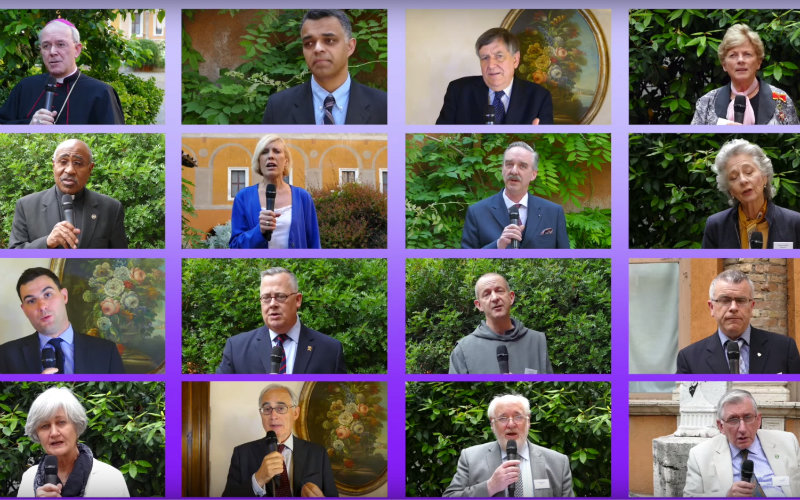 ROME, July 13, 2016 (LifeSiteNews) — In a spirit of love, humility, and faithfulness, 16 international life and family advocates are asking Pope Francis in a powerful new video to unambiguously speak the truth of the Catholic faith, to end doctrinal confusion, to restore clarity, and to be the Holy Father that Catholics need.

“We are living in a very special time of a deep crisis of faith inside the Church,” said Bishop Athanasius Schneider, the Auxiliary in the diocese of Maria Santissima in Kazakhstan, who opens the video, produced by LifeSiteNews.

“It is not a secret. It is very evident. A lot of people, the simple faithful, are suffering because of the situation of confusion,” he added.

The 30-minute film, titled Plea to the Pope, comes in the wake of confusion caused by the pope’s April release of his Apostolic Exhortation Amoris Laetitia, in which he made a number of concerning statements about marriage, divorce, sin, reception of Holy Communion, and sex education for children. The Exhortation has generated numerous contradictory interpretations from various theologians as well as cardinals and bishops.

Bishop Schneider called it “very urgent” that the pope “states more clearly, in a very unambiguous manner — in such a manner which will not leave any space for misinterpretations — [on] the issues of family and the sacredness of marriage.”

The film contains an impressive lineup of international life and family advocates who decided that the time had come to voice their concerns for the good of the Church, of souls, and of nations.

Some of those featured in the video are:

• John Smeaton – President, Society for the Protection of Unborn Children Co-founder, Voice of the Family

Many of the supplicants begin their concerns with a statement of love and fidelity to the divinely instituted Office of Peter and its current holder. They assure the Holy Father of their love and their prayers.

“I love the Holy Father. I pray for him every day,” says LifeSiteNews’ Editor-in-Chief John Henry Westen in the film. “And I [raise these concerns] out of great love for the Church. But we need to work for Christ and his truth. And I need to defend my own family, and [statements he has made are] a threat to the faith of my children.”

Westen says that there has been too much “purposeful ambiguity” in the pope’s interviews and documents.

“There's been a lot of ambiguity, purposeful ambiguity, leaving things open so that there is confusion. And I think that it does a great deal of harm. You have this scenario where people start to wonder what exactly the teaching is. This is a horror – that Catholics, who believe and love the faith, are now confused on the fundamentals of the faith in these areas where the teaching means life or death, and I don't mean only physical life or death; it means eternal life or death.”

John Smeaton, President of the Society for the Protection of Unborn Children, begins his plea by expressing his “reverence” for the pope and ends by stating that he prays for the pope “every day.”

“I say this with huge reverence for the Holy Father and with attention to common advantage. What he has written is justifying adulterous acts. We are already hearing of couples who, on the basis of what you have written, Holy Father, have decided to give up their heroic virtue and fall into objective mortal sin, and to come forward to receive the body and blood of Jesus Christ.”

“How is it possible to reconcile what you have written with the teaching of the Church, with a tradition of the Church?” he said in the film.

In response to Pope Francis’ February tacit approval of contraception in response to concerns about the Zika virus, Christine Vollmer — a founding member of the Vatican’s Pontifical Academy for Life and fonder of Latin American’s Alliance for Life — stated that the Catholic Church “will be destroyed” if it accepts contraception.

“Contraception has destroyed a number of churches already. Today, the Anglican Church is empty. They have few vocations. And it's because this vital connection between the love of a husband and wife and the love of the Church — the love of God and trust in his providence — was broken in the Anglican Church. And now it would seem that it is being broken in the Catholic Church, in spite of Paul VI’s agonized, but inspired, encyclical Humanae Vitae.”

One supplicant expressed concern that the recent Synods on the Family and the Exhortation that came from them, rather than helping the family that is “under attack” instead had the effect of “gasoline being thrown on the fire.”

“We see that the family is under attack. It is in a state of crisis,” said Preston Noell, the Director of American Society for Tradition, Family, and Property.

“The situation only becomes worse, however, when added to the fact that the family is crumbling, some people — including some Catholics, maybe even a large number of Catholics — come to think or believe that marriage can be dissolved – which of course, it cannot be.” Speaking of Amoris Laetitia he said, “Instead of receiving what we would hope to find, a buttressing and strengthening of the sacred institutions of holy matrimony and marriage-and-the-family, we see something like gasoline being thrown on the fire.”

“This is very troubling to us. What we would really hope to see is that this would be turned around. We need to pray to the Holy Ghost to inspire the Church, to inspire our leaders, to inspire the Holy Father — as I mentioned, for whom I pray every single day — to help turn the situation around, to strengthen the family. Because if not, I fear we perish,” he said in the film.

Historian Roberto de Mattei, a professor in the European University of Rome and the founder of the Lepanto Foundation, called Amoris Laetitia a document of “catastrophic consequences.”

“The terrible impact of this document is that many souls are today in a deep crisis of conscience. There is the possibility that a great number of souls will lose their eternal life. In my view, the true life is, above all, the spiritual life. More than the physical life, the spiritual life of souls is today in great danger. We have to react against this,” he said.

Bishop Schneider concluded the film with an appeal to the faithful for prayers for the Holy Father.

“And so, let us pray for our Holy Father, whom we love, that he may have the courage to speak with the same clarity and with the same courage as Christ spoke, as Peter spoke,” he said.

Bishop Schneider: God needs the ‘simple faithful’ to protect the faith in this time of crisis

WATCH: Bishop Schneider’s 12 steps to surviving as a Catholic family in a heretical wasteland