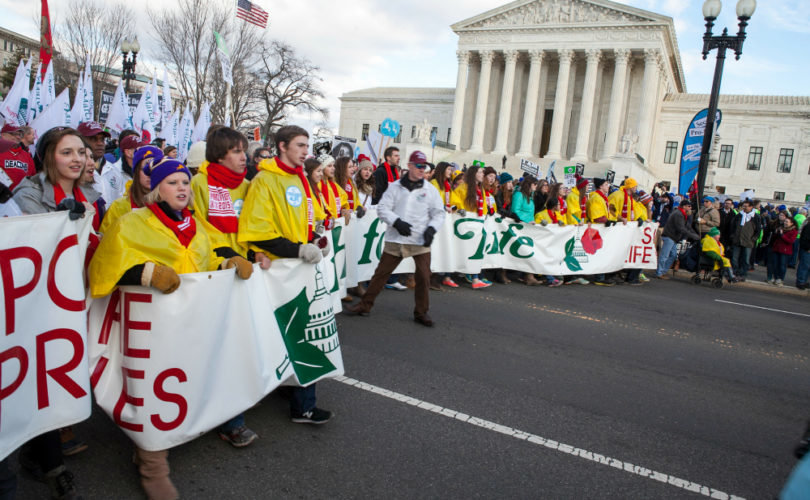 WASHINGTON, D.C., December 21, 2017 (LifeSiteNews) – Cardinal Donald Wuerl of Washington and the bishop of the neighboring Diocese of Arlington announced Wednesday that the Catholic faithful may obtain a plenary indulgence by participating in the 2018 March for Life.

Often misunderstood or simply unknown to many Catholics, an indulgence is a way to cut time off of Purgatory either for oneself or for a soul who has already died. Purgatory is the state in which souls are as they are purified to enter heaven.

“All who die in God's grace and friendship, but still imperfectly purified, are indeed assured of their eternal salvation; but after death they undergo purification, so as to achieve the holiness necessary to enter the joy of heaven,” the Catechism of the Catholic Church teaches (CCC 1030).

Purgatory is “entirely different from the punishment of the damned,” the Catechism explains, and Catholic doctrine on Purgatory was formulated “especially at the Councils of Florence and Trent” (CCC 1031).

The tradition of the Church, by reference to certain texts of Scripture, speaks of a cleansing fire, the Catechism says (1 Cor 3:15 and 1 Pet 1:7).

Serious sins are like thick, red thread sewn into a white handkerchief. Confession pulls those threads out, but the needle and thread have still left the holes on the handkerchief, making it imperfect. Purgatory is the filling of those holes – and so is the gaining of a plenary indulgence – so that the handkerchief can be completely whole and untainted again.

Catholic doctrine on Purgatory and indulgences reveals a major difference between Catholic and Protestant theology about whether one’s actions, assisted by grace, can remove temporal punishment due to sin.

The Catholic Church teaches that a plenary indulgence – the kind available to Catholics attending the 2018 March for Life – frees a person from all temporal punishment due to sin.

In other words, if a Catholic properly received the plenary indulgence at the 2018 March for Life and then immediately died, he would go straight to heaven rather than spend some time in Purgatory.

Cardinal Wuerl and Arlington Bishop Michael Burbidge told their fellow bishops on December 20 about the possibility of Catholic faithful gaining a plenary indulgence by participating in March for Life events on January 18 and 19.

“We bring this to your attention in the hope that you will share this information with those entrusted to your pastoral care, and who may be traveling to Washington, D.C. to participate in March for Life activities this January,” the bishops wrote. The March for Life activities take place in the Archdiocese of Washington, which encompasses the whole District of Columbia and nearby parts of Maryland, and the Diocese of Arlington in Northern Virginia.

“Tradition also teaches…that an indulgence can be attached to various works of private and public devotion,” The Handbook of Indulgences: Norms and Grants (published in 1986) says. “Therefore such works of charity and repentance which ought to be given greater emphasis in our times can be enriched with an indulgence.”

“The Christian faithful who are truly penitential and compelled by charity” can gain a plenary indulgence “if they take part in the sacred celebrations, along with the great assembly of people, throughout the whole course of the annual event that is called ‘March for Life,’” the bishops wrote.

“The aged, sick and all those who due to grave reason are not able to leave home will be equally able to obtain a plenary Indulgence” if they unite themselves spiritually to the March for Life, the bishops decreed.

The homebound can do this by “having the disposition of detachment from any kind of sin with the intention of fulfilling, as soon as one is able, the three customary conditions.” They must also “spiritually join themselves to the holy ceremonies, while also having offered prayers and their sufferings or the ailments of their own life to the merciful God.”

“I am delighted to learn of the offer of the plenary indulgence on the occasion of the March for Life,” Father Frank Pavone, National Director of Priests for Life, told LifeSiteNews.

It’s possible for Catholics to gain partial or plenary indulgences from a host of activities, like visiting churches on certain holy days and praying certain prayers.

Wuerl and Burbidge expressed their hope that “the efforts of all across this great nation to lift up the value and dignity of each human life continue to bear fruit” and that all may “experience God’s blessings in this noble undertaking.”

Their full letter is available below.