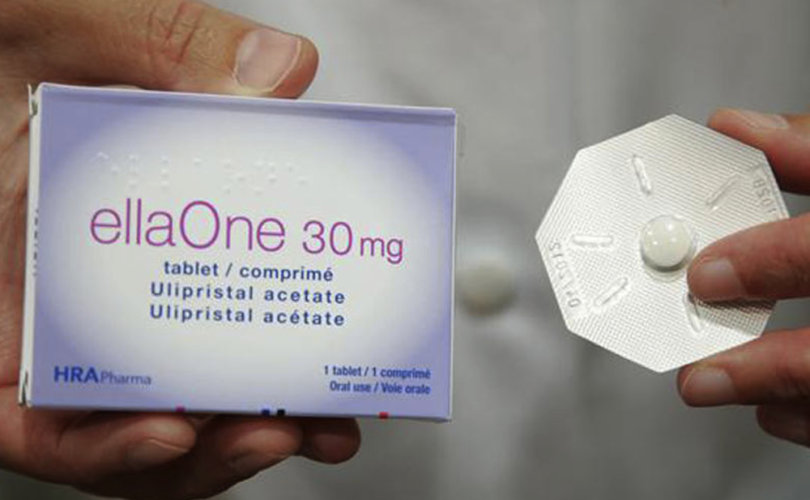 WARSAW, Poland, February 27, 2017 (LifeSiteNews) — Poland wants to make the so-called emergency contraception ellaOne available by prescription only, but the Right to Life Foundation criticized the Minister of Health for not completely banning the abortifacient drug.

The Polish government under the Law and Justice party has begun drafting legislation to regulate hormonal contraceptives, which are available in pharmacies by prescription only. EllaOne is included among them.

The conditions of sale differ among European Union countries, with Germany requiring a prescription and Malta banning the drug.

Since 2015, the Polish regulation has allowed for the sale of ellaOne to girls 15 years and older. However, in practice, without the need for a prescription, the age limit was difficult, if not impossible to enforce. The current Minister of Health decided to make a correction.

EllaOne is produced by the French company HRA Pharma. In the United States, its brand name is ella, marketed by Actavis Generics (formerly known as Watson Pharmaceuticals and Actavis, plc).

In response to some criticism toward the change of the policy, Minister of Health Konstanty Radziwiłł told media that Poland requires a prescription for contraceptives, so why not for ellaOne?

Calling the situation “unacceptable,” he explained that a “potent medicine” should be available by prescription only.

“This move is to bring normalcy, and not to ban this type of products,” he said.

The Right to Life Foundation did not appreciate the minister’s phrasing. The organization wrote a petition addressed to him in which they criticized his use of the word “normalcy” while speaking about ellaOne. Pro-lifers also pointed out that some of “his statements are untrue and misleading,” specifically those calling the drug “medicine.”

“It confuses women,” said Kinga Małecka-Prybyło of the Right to Life Foundation. “Pregnancy is not a disease, and an abortive pill is not medicine. EllaOne does not cure any disease. It can cause serious health problems and bring death to an unborn child.”

Mariusz Dzierżawski of the Right to Life Foundation commented that the sale of ellaOne violates Polish law. Abortion is generally illegal in Poland, allowed only in some circumstances.

“EllaOne and other drugs of this sort should be completely banned in Poland,” he said.

Dzierżawski added that “ellaOne is killing by prescription.”

However, the Minister and the pro-lifers seem to agree on some issues. During an interview for commercial radio Zet, Radziwiłł, a physician and father of eight, admitted he wouldn’t prescribe ellaOne even to a raped woman. The doctors in Poland have the right to freedom of conscience, he explained.

During an exchange with a woman journalist, who stated that ellaOne is not an abortive pill, he curtly answered, “You are certainly wrong.”

Dr. Donna Harrison, a board-certified obstetrician-gynecologist and the executive director for the American Association of Pro-Life Obstetricians and Gynecologists, explained how ellaOne works in a National Review article, “Contraception After Conception?”

Dr. Harrison wrote that ellaOne blocks a hormone necessary for embryos to live. She called it “a second-generation version of RU-486,” referring to the abortion-inducing drug approved drug approved by the Food and Drug Administration in the United States.

Dr. Harrison explained that, “the two drugs work the same way in a woman’s body. If either ella or RU-486 is given several days before ovulation is expected, it can cause the egg release to be delayed several days.”

She added that “this is the basis of advertisements in which the manufacturer states that the mechanism of action is to delay ovulation.” But it’s different when pill is taken only shortly before egg release, or after egg release.

”When it is taken after the embryo has formed, it blocks the action of progesterone, which prepares the mother’s body to allow the embryo to implant,.” she said.

Dr. Harrison explained that when progesterone is blocked, the embryo cannot implant, or it implants imperfectly and subsequently “miscarries.”

Harrison concluded that ellaOne “can clearly produce an environment in the woman’s body that damages or destroys embryos.”