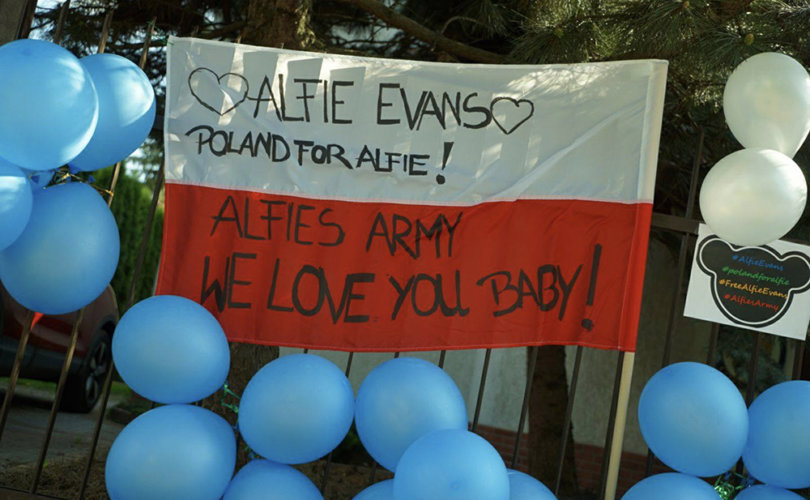 WARSAW, April 25, 2017 (LifeSiteNews) — An avalanche of support for toddler Alfie Evans has grown in pro-life Poland.

Polish people cannot accept this injustice and some are hoping for royal intervention. While the Queen is mostly a figurehead, she has an enormous potential to raise awareness and shape public opinion.

Meanwhile, Polish TV celebrity Wojciech Cejrowski has been the driving force in making Alfie a household name in Poland. Cejrowski has 700,000 followers on his Facebook account, and his comments on social media quickly reached even millions of Poles living outside the country.

Polish people are shocked and cannot believe that the British courts and Alder Hey hospital can hold Alfie a hostage. The Poles cannot do much, but still try what they can.

Hundreds of thousands are active on Facebook, and a few even came to the hospital in Liverpool. A small group visited Alfie’s father, Tom and gave him a Polish flag. They encouraged their Facebook followers to pray to Saint Rita of Cascia, a patron saint for the impossible.

Luke Mintz of the Liverpool Echo wrote on Twitter that he saw three Polish flags outside Alder Hey. He also noticed that Polish president Andrzej Duda expressed his solidarity with Alfie on Twitter:

Alfie Evans must be saved! His brave little body has proved again that the miracle of life can be stronger than death. Perhaps all that's needed is some good will on the part of decision makers. Alfie, we pray for you and your recovery!

Poles in Cracow, Warsaw, and Lublin brought Teddy bears for Alfie to British consulates in a show of support. In Warsaw, a group of college students prayed the rosary outside the British consulate. In cities without consular representation, such as Rybnik, people gathered near monuments to pray. There was also a special mass celebrated for Alfie in Szczecin. The candles are lit in windows, or on the streets. The whole country is praying and thinking about little Alfie.

Alfie Evans is not ‘dying’ or ‘brain-dead,’ he’s been misdiagnosed: Polish doctor

UPDATED: 3 things you can do to help Alfie Evans right now