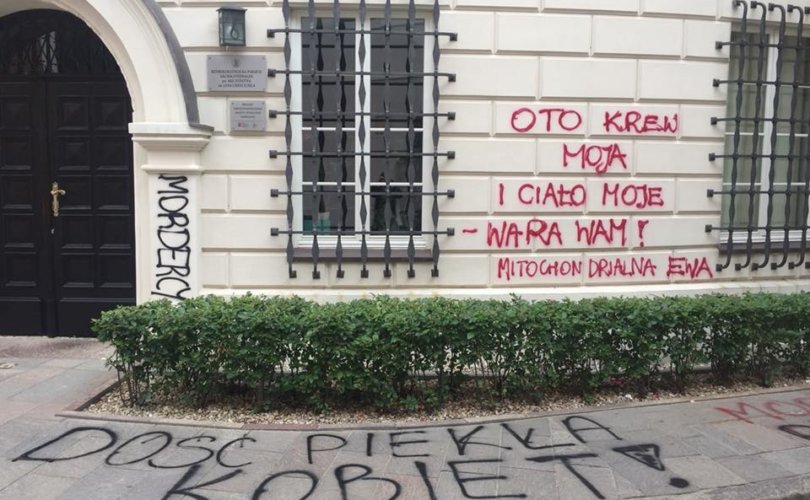 Natalia Broniarczyk, who is proudly “pro-abortion, not just pro-choice,” posted several photographs of the spray-painted slogans on her Facebook page with the comment, “Perhaps what has begun in Ireland is in Poland. We are anti-church because the church is anti-woman.” (Ireland voted in May to lift restrictions on abortion.)

Her profile picture displays a photograph of herself with a poster reading “Aborcja jest ok.” (Abortion is OK).

The vandalism occurred hours after the so-called “Polish Women’s Strike” held a small protest outside Poland’s parliament, or Sejm, in Warsaw. Broniarczyk was a speaker at Monday’s rally, telling the crowd that she was fed up with politicians who “on the orders of the Church” were creating an “anti-woman” abortion law and “forcing” Polish women to travel internationally to have abortions.

The “Zatrzymaj aborcje” (“Stop abortion”) bill, a citizens’ project signed by more than 830,000 Poles, was discussed in the Polish parliament on Monday. The bill seeks to remove an unborn child’s illness or disability as a condition for which he or she can be aborted.

Broniarczyk took issue with Kaja Godek, the chief architect of the bill, because she had not attended a disability rights rally.

Called by some the “chief pro-lifer of the Third Polish Republic,” Godek is the mother of a child with Down syndrome.

Also speaking at the pro-abortion rally was politician Joanna Scheuring-Wielgus, who said the demonstrators’ task was to drive the ruling Law and Justice (PiS) party from Poland. A far-left extremist, Scheuring-Wielgus sits in the Sejm as an independent.

The spray-painted slogans included “Behold my body, behold my blood, buzz off”; “women-murderers” and, chillingly, “We remember Rwanda.”

Father Bogdan Bartołd told Polish media that he found the inscriptions shortly before 7 a.m. Tuesday when he went to Mass. “Yesterday, when I came back from a concert around 9 p.m., they weren’t yet there,” he said.

He believed the graffitti was the work of opponents of the ““Zatrzymaj aborcję” bill, a suspicion at least partly borne out by Broniarczyk’s Facebook photographs and remarks.

One of Broniarczyk’s supporters told her on Facebook that she needs to think beyond the Emerald Isle.

“Ireland is not enough,” wrote Robert Nowak. “You have to be like Chile and Argentina. That's where the real anti-Catholic revolution is taking place.”

Others were unsure about the damage the pro-abortion activists wreaked upon the Catholic Church’s buildings.

“Vandalism is vandalism,” wrote Anka Kobierska. “It doesn’t matter what we are fighting for.”

“Well, actually,” responded Monika Dedo, “do you think that arson would look better?”

Police are investigating the incident.