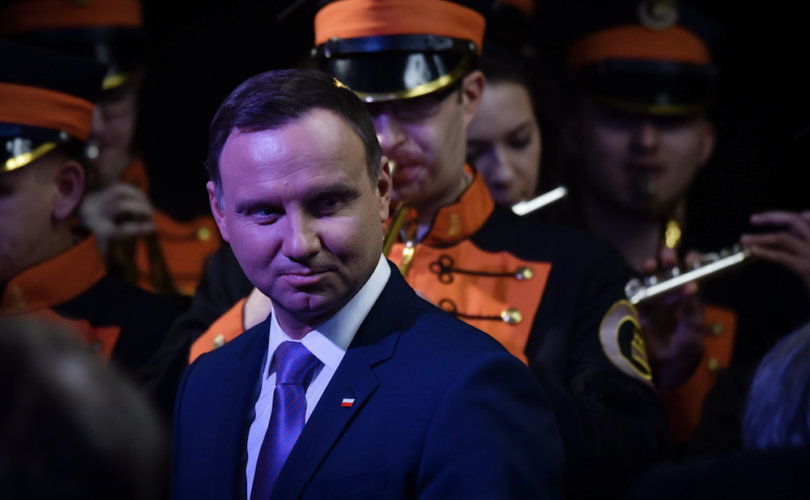 Asked if it is possible politically to better protect the unborn, Duda recalled social upheaval after two opposing abortion drafts failed in the Parliament last year. One would have completely banned abortions and the other would have introduced abortion on demand (up to 12 weeks).

Even though the pro-life bill fared better in Parliament, it was ultimately rejected amid pro-abortion “Black Protests” and procedural irregularities.

Both proposals were “citizens’ bills.” According to Polish law, a group of citizens can propose a bill to the Parliament after collecting at least 100,000 signatures of support within three months. Because both drafts came from a grassroots movement, as opposed to politicians, Duda said, “they should be treated seriously and the same way, regardless of the content.”

The president acknowledged that he supports the protection of life not only for religious reasons but also “for the sake of the country.” In other words, Poland, like most European countries, needs to raise its birth rate.

Duda emphasized, however, his own pro-life credentials.

“I have no doubt that increasing the protection of unborn disabled babies is necessary,” Duda said, adding that children with Down’s syndrome are beautiful and happy and should be better protected legally. “The fact that the life is taken from them is tragic. I totally disagree with such a policy.”

This is not the first time that Duda has addressed the abortion of babies with Down’s syndrome. During a previous interview, the president strongly criticized a late-term abortion procedure in Warsaw “where a baby survived an abortion and was left to die.”

“I think everybody understands that this event should never have taken place,” Duda said.

Although the Polish constitution gives the president the power to propose a new law, Duda has urged the Parliament and the Health Minister to take the initiative.

The Right to Life Foundation, which spearheaded the abortion ban in 2016, wrote a petition titled “Mr. President, Save the Children,” asking Duda to initiate a bill protecting the unborn in Poland. About 4,000 people have signed it thus far, but the president has not responded.

In his TV Republika interview, the president also mentioned a recently passed piece of legislation simply entitled “Pro Life” that provides a one-time financial aid payment of PLN 4,000 (approximately $1,000) to mothers who give birth to seriously disabled or terminally ill babies. Free palliative, psychological and medical care is also included in the bill.

“We want better legal protection for the unborn, but we need to realize that families raising those children need support,” Duda said.

Duda explained that for a long time the Polish government did not take this issue seriously.

“I pay homage to those families because of the hardship of giving a disabled child a decent life and sense of equality,” he said.

His TV interview comes at the time when another initiative for a total abortion ban is awaiting action by the Polish lower house, the Sejm.

The draft was presented by the Polish Federation of Pro-Life Movements in September 2016. A initial vote was announced for January 12, but it still hasn’t taken place. The draft is still in the Sejm’s Commission on Petitions. Poland’s ruling Law and Justice (PiS) party appears to be stalling.

The failure of the Sejm to act means that the 1993 law is still in force. Even though abortions are technically illegal, they are allowed when a doctor suspects that the baby has a severe and irreversible handicap or an incurable and life-threatening disease, when the woman’s life or health is endangered, and when the pregnancy is a result of a criminal act.

Meanwhile, Duda expressed support for President Donald Trump and his comments about NATO that the countries should spend 2 percent of their GDP on military. He also hopes that Trump will visit Poland soon.

On same-sex “marriage,” Duda said he doesn't believe there is a “political majority” that could change the Polish constitution to allow for different interpretations of the law, which defines marriage as a union between a woman and man.