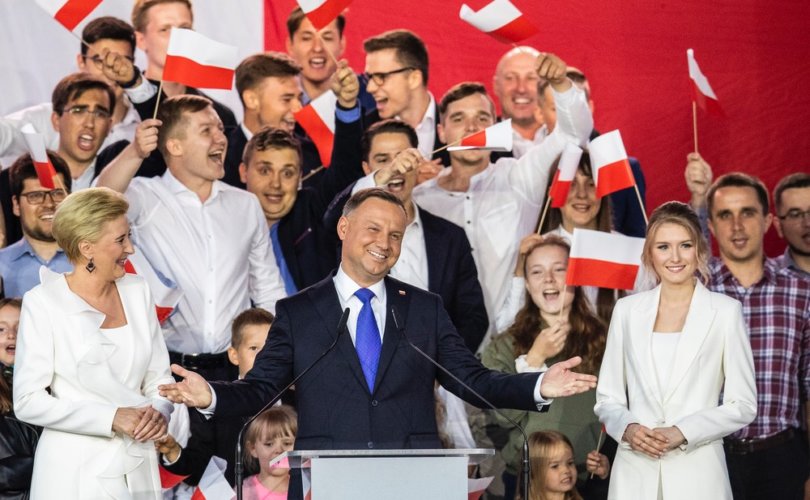 President Andrzej Duda, 48, of the center-right Law and Justice (PiS) party managed to see off challenger Rafał Trzaskowski, also 48, of the center-left Civic Platform (PO) party in an election with the highest voter turnout in 25 years.

The election battle was closely fought, and 68.2 percent of Poland’s eligible voters turned out to cast their ballot in Sunday’s second round. The two contenders were so closely matched in the exit polls that it was not immediately apparent that Duda had actually won.

The first round of the 2020 presidential elections occurred on June 28. That Sunday Duda received 43.5 percent of the vote and Trzaskowski, the current Mayor of Warsaw, 30.5 percent. During this round the president was challenged for the social conservative vote by the National Movement’s Krzysztof Bosak, 38, who received 6.79 percent.

The Polish choice was not only between two candidates but between two philosophies: traditional Polish family values versus a globalist pro-LGBT ethos. Krystian Kratiuk of Polonia Christiana magazine told LifeSiteNews that Trzaskowski’s near-success is evidence of “significant changes” in society.

“The fact that Trzaskowski was supported by so many people is because of significant changes in Polish society, [a mentality] which is striving for a Western model – a totally liberal lifestyle, with homosexuality at the forefront,” he stated by email.

However, Kratiuk also said that there is an “informal anti-PiS party” that includes almost all the largest media organizations within Poland. PiS, the ruling party, is also attacked from time to time by the international press and by the European Union. Given all this opposition, Kratiuk deemed Duda’s win “a huge success.”

“This has never been seen better than today. That's why many people turned out to vote for Duda against the elite, despite reservations. Elites who hate their own people.”

Reservations included doubt about Duda’s party’s real commitment to the pro-life cause. Despite Duda saying that he will sign into law any bill criminalizing eugenic abortion of disabled children, his party has dragged its feet on bringing the issue to a final vote.

“This election also shows that in Poland, despite the crushing dominance of liberal-left media, there is still a strong conservative and Catholic spirit; the election turnout was the biggest in 25 years,” he said.

Kratiuk also gave credit for Duda’s success to the social programs introduced by the Law and Justice party over the last few years, including a baby bonus of 500 PLN per month per child. These initiatives, which PiS assured the public PO would cut, have improved the Polish standard of living.

Next time PiS might not be so lucky. Trzaskowski received more votes from the 18-49 year old segment of society, whereas Duda’s success depended on people over 50. He won by only 500,000 votes, and by the next parliamentary elections in 2023, 1.3 million elderly Polish voters will probably have died and been replaced in the polls by today’s western-looking teenagers.

Kratiuk wonders if Duda and PiS will begin to compromise on their pro-family, pro-tradition policy to win the youth vote, as the political power and ideological stance of the rising generation are “clear.”

“The only thing that is not clear is how PiS will behave in this matter,” he said.

“But whether it remains the bastion of Polish Catholicism or follows in the footsteps of the [socially liberal] British Conservative Party, it will not turn into a party in which ‘it is okay to be gay.’”

At the same time, the journalist noted that the ruling party has as yet taken no concrete steps to counter LGBT philosophy in Poland. Kratiuk thinks Duda’s promise to add a ban on adoption of children by homosexuals to the Polish Constitution was a sop to social conservatives who might otherwise have voted for the National Movement’s Krzysztof Bosak instead.

Some found a vivid example of the generation gap in President Duda’s own family. After the exit poll, Duda’s 25-year-old daughter Kinga expressed a desire that nobody in Poland “fear leaving the house” because of who “[they] love.”

“I would like to appeal that nobody in our country will fear leaving the house,” the London-based Kinga Duda said.

“Regardless of the color of our skin, of whom we support, and of whom we love,” she continued.

“This was interpreted as a tribute to the LGBT community,” Kratiuk said. “Duda has not commented on this so far.”

Meanwhile, the re-elected president responded to the news of his victory in the most iconic way possible in Poland: he went straight to Częstochowa to pray before the Black Madonna icon representing Our Lady Queen of Poland.