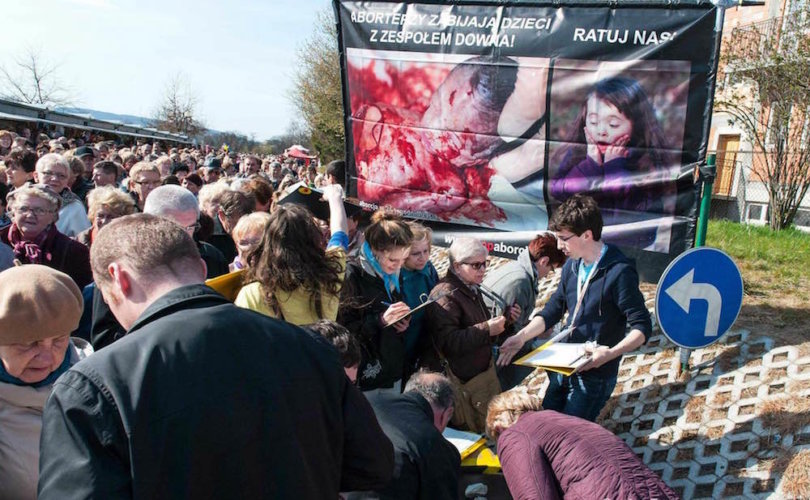 The Right to Life Foundation collects signatures for the pro-life citizens' initiative in Łagiewniki, 2015.Anna Trutowska

WARSAW, Poland, April 5, 2016 (LifeSiteNews) – The Polish government is under strong pressure and intimidation because of a proposed citizens’ bill banning abortion that will soon end up in Parliament. It will be a test of strength and integrity for the ruling pro-life Law and Justice Party. At the same time, it will show how much democracy the opposition can tolerate.

The Law and Justice (PiS), which could make the ban happen, has many enemies inside and outside of Poland that are trying to portray it as a threat to democracy and freedom. For many Poles, this criticism is hard to understand. The party came to power during a democratic election in 2015, and soon will have to deal with the proposed bill, again thanks to the democratic process. The proposed law is not called a citizens’ bill for nothing. It will require 100,000 signatures, which will be gathered on the streets by a massive number of volunteers. Obviously, then, the bill owes its existence to a grassroots movement, and its appearance before the Parliament will be proof of its high level of support. This is simply the purest form of democracy in action.

However, the media does not usually portray it this way. The Civic Platform, the former ruling party, has vowed to vote against the ban. Several times this party blocked any changes to the existing law that allows the killing of unborn children in three circumstances. What’s more, former Prime Minister Ewa Kopacz of the Civic Platform enforced party discipline on the issue, forcing all the party’s MPs to vote against the attempt to change the abortion law. The politicians from Civic Platform repeatedly showed no support for the freedom of conscience, not even for its own people.

Another player on the opposition front is the pro-abortion Gazeta Wyborcza, the largest daily newspaper in Poland. The paper is already circulating untrue information about the proposed ban. Ordo Iuris Institute for Legal Culture, the author of the bill, points out that the paper falsely claims that women who accidentally miscarry will face years in jail. What’s more, the bill says that a judge may dismiss charges even if a woman purposely aborts her child, given attenuating circumstances. Gazeta Wyborcza also misinforms its readers by suggesting that the doctors will not be able to save women’s lives because of the protection of the unborn child. In fact, the bill specifically states that the doctor who causes an unborn child’s death trying to save a woman’s life will not be punished. The newspaper also misrepresents the consequences of the bill concerning prenatal testing and in-vitro fertilization. These are not barred in the proposed abortion bill, but rather regulated by another law.

Unfortunately, misinformation about the legal changes concerning abortion in Poland may find its way into the foreign press. Mariusz Dzierżawski and Jerzy Kwaśniewski, the heads of two organizations that prepared the proposed abortion law, namely the Right to Life Foundation and Ordo Iuris Institute for Legal Culture, respectively, told LifeSiteNews that neither Gazeta Wyborcza nor any foreign correspondent has contacted them about the bill. The Guardian and news wires such as AP and AFP covered the story, but did not bother contacting Dzierżawski and Kwaśniewski, even though both speak English and live in Warsaw.

Law and Justice have already faced bad press in Gazeta Wyborcza and in foreign media. The main attack came because of a conflict about the Constitutional Court that the Civic Platform started. Knowing it would lose the election in 2015, the Civic Platform replaced some judges to ensure its control of the Court after losing power. This would allow them to stop any legislative changes that Law and Justice would introduce. This move was considered unconstitutional by some, but received no negative coverage abroad. This changed when Law and Justice tried to play by the same rules. The bad press mostly originated from the German media and German politicians such as Martin Schultz, current president of the European Parliament. Other German politicians have threatened Poland with economic sanctions. The pressure and intimidation did not sit well with many Law and Justice politicians whose grandparents were killed by the Germans during World War II.

The anti-PiS machine is generated in large part by disgruntled and scandal-plagued Civic Platform politicians who lost power and their means to make money. Another reason why the ruling party is under such attacks from the former establishment is PiS’ dedication to de-communization, a process that would reveal who collaborated with the Communist-era secret police. Law and Justice want the former Communist agents who currently are politicians, prosecutors, judges, professors, and journalists to disclose their disgraceful past. Some prominent Poles have skeletons in their Communist-era closet, and they all have something to lose.

The secular West does not like Law and Justice because it is a center-right party that talks about Christian values and respects the social teaching of the Catholic Church. The party opposes abortion, euthanasia and same-sex “marriages.”

However, it also stands for many values cherished in the West. Many Law and Justice politicians originated from the Solidarity (trade) movement and the party is dedicated to fighting crime and corruption. Much of PiS’ actions could be applauded by those who tend to be on the political Left. It supports Poland’s membership in the European Union and holds many populist and socialist ideas. For instance, a new law pays a monthly allowance of 500 zł ($135) for every child after the firstborn, and another will lower the retirement age. The party also supports free preschool and daycare and already has introduced free prescription drugs for seniors. Even more progressive, it may soon also legalize the use of medical marijuana. This most recent change by PiS did not receive much coverage either, although it would be much appreciated by the liberal left.

Despite the attacks, Law and Justice is still very popular in Poland, and its support is growing. According to a recent poll by IBRiS for Onet.pl, PiS’ approval ratings are ten percentage points higher than the second-most popular party, and twice as high as the Civic Platform’s. But the support may not last very long if PiS betrays its voters and its pro-life platform. Prime Minister Beata Szydło from PiS, who last week backed the proposed abortion ban, is already changing her tune. Now, she claims she only supported the bill as a private person, acting as though she couldn’t handle the pressure.

Many Poles who voted for PiS hope it will not yield to intimidation and will finally establish full legal protection for the unborn. Many more are aware of the gruesome and barbaric truth about abortion thanks to more than 600 street exhibits throughout the country. Thanks to these exhibits, Polish people also remember that Hitler first introduced abortion for Polish women in 1943. German pressure and interference in internal Polish affairs may trigger a backlash. Let the members of the party that has Law and Justice in its name act according to their conscience and prove their strength and integrity.