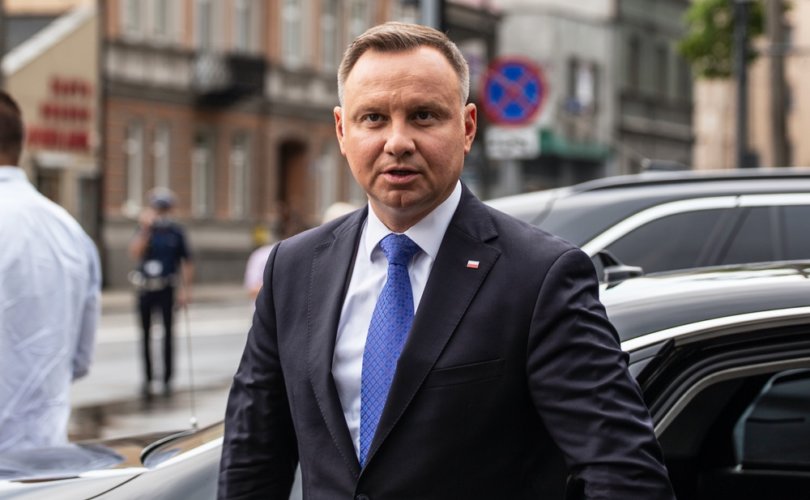 VATICAN CITY, Italy, September 29, 2020 (LifeSiteNews) ― Poland’s recently re-elected president repeated his commitment to supporting the traditional family in comments tying the protection of the family to the survival of the Polish nation.

President Andrzej Duda, 48, said this in an interview with EWTN while in Vatican City to meet with Pope Francis last week.

“There is no nation, no State without a family that has children, which in turn causes the renewal of generations, which means that the nation remains, and it can create a state,” Duda said.

“So, if someone thinks of himself as a Polish patriot, if someone thinks that Poland should remain, that our nation should exist, then there should be no doubt that the family in all of this has a fundamental meaning. That’s how I approach this.”

The Polish president also told EWTN that the protection of the traditional family, the definition of marriage as a union between a woman and a man, and the right of parents to raise their children according to their convictions are enshrined in the Polish Constitution.

“I only act according to the Polish constitution,” Duda said in response to a question about opposition from the European Union.

“And I do not hesitate to talk about it at the European Union. But I work, I serve Poland, that is my duty. And how politicians in other countries, other presidents approach this, that’s their prerogative. And it’s their societies who hold them accountable. That’s my approach. And this is also a Christian approach.”

The EWTN interview gave Duda the opportunity to expound on his Catholic upbringing in Kraków and membership in Poland’s “John Paul II generation,” those who were children when Karol Wojtyła, then the Cardinal Metropolitan of Kraków, was elected Pope.

Duda related that when the Polish Pope returned to the still-communist republic to visit, parents brought their children to see him and then, as they grew older, the young people would gather outside the Bishop’s Palace in Kraków or gather at large open-air Masses to catch sight of him.

“The Holy Father did the greatest thing you could do for the Poles at that time, namely, he showed to my parents’ generation how many people in Poland think alike,” the president said.

Pope St. John Paul II supported his countrymen against the foreign ideology of Soviet-dominated communism; President Duda pledged in his recent and successful re-election bid to protect the Polish family from what some Polish politicians have called a “foreign” or “western” LGBT ideology. In his “Family Card” (list of policies), Duda promised not to support the adoption of children by homosexual couples and to keep the “propaganda of LGBT ideology” out of public institutions. He also stressed the right of parents to decide the “spirit” that will shape their children and promised support for homeschoolers.

Earlier this month, Duda became the first Polish president to march in the annual March for Life and Family in Warsaw.

But whereas the Polish president is reviled by Poland’s pro-LGBT fringe movement, and its backers in the European Union, he is also criticized by some pro-life activists who believe that he hasn’t done enough to protect the unborn.

Since Duda was first elected in May 2015, Polish pro-lifers have hoped that he would assist in protecting those unborn children still unprotected by Poland’s relatively strict abortion laws. However, since then Polish pro-lifers have failed in their attempt to bring a total ban on abortion in Poland, with exceptions only to save the life of the mother, and, so far, their subsequent bid to protect unborn babies with Down syndrome or severe disabilities from destruction.

Duda has voiced support for a ban on eugenic abortion, but it still continues. In April 2020, a final vote on a citizens’ bill calling for the end to the practice was delayed. In contrast, the leader of Duda’s PiS [Prawo i Sprawiedliwość or Law and Justice] party, Jarosław Kaczyński, is strongly backing a bill banning commercial fur-farming, and Poles expect Duda to sign it into law.

According to a press release from the Vatican, President Duda met with Pope Francis on September 25, and then spoke with the Holy See’s Secretary of State, Cardinal Pietro Parolin, and Archbishop Paul Richard Gallagher, the Secretary for Relations with States.

“The cordial discussions took place in the context of the centenary of the birth of Saint John Paul II and the 40th anniversary of the founding of the independent autonomous trade union ‘Solidarność [Solidarity],” explained the Vatican press office.

“Some topics of mutual interest related to the mission of the Church were discussed, including the promotion of the family and the education of young people,” it continued.

“Finally, attention turned to some international issues, such as the current health emergency, the regional situation and security.”