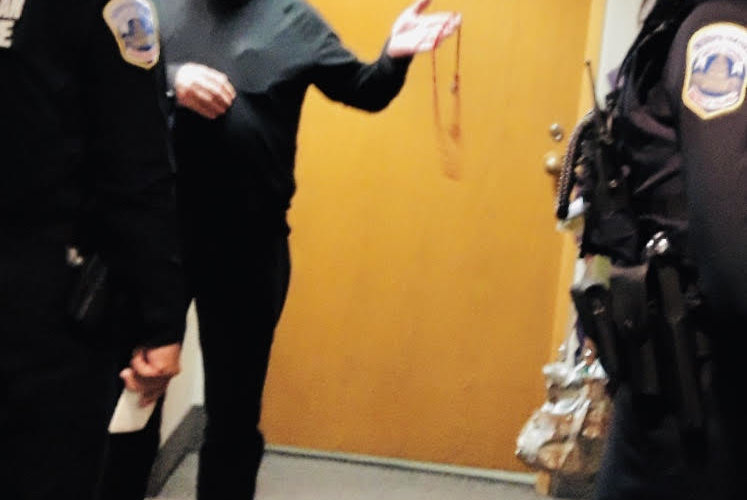 POLAND, October 10, 2017 (LifeSiteNews) — By Sunday, the whole world was talking about Poland’s “Rosary to the Borders.”

On October 7, the Feast of the Holy Rosary — also known as the feast of Our Lady of Victory — more than a million Poles went to the borders and airport chapel of their nation to pray the rosary. A chain of people, in some places three or four rows deep, encircled the entire country.

“From data coming from individual parishes, we conclude that there were about 1,200,000 to 1,400,000 people,” said organizer Maciej Bodasiński. He had gone with his family to the Vistula Lagoon, east of Gdańsk, and then prayed the rosary while sailing along the blue border of the Baltic Sea.

“And considerably larger numbers of people were praying throughout Poland, over the radio, in parish churches, in homes, in the airports, in hospitals, in the streets, by roadside crosses and chapels. Unbelievable!”

“People from the whole world united to the prayers,“ he continued. “Akita in Japan, New Zealand, the village of Stamsund in the Lofoten Island above the Arctic Circle, China, Cambodia, Germany, Great Britain, Norway, Denmark, Czech, Slovakia, Ukraine, Belarus. There were also Polish soldiers praying in the military base in Bagram, Afghanistan. Faithful in Kazakhstan, in the USA. People were writing from everywhere. We even got a message from the beach in Tenerife that they were praying. Alleluia!”

The logistics of transporting hundreds of thousands of people to the borders were not easy.

“Two buses of people traveled from my parish church (in Rrzeszów) to Krempna,” Jacek Kotula told LifeSiteNews. “There was a problem with buses because there were so many groups of people wanting to travel to the border that there weren’t enough buses to rent. From our city alone, 50 buses went (to the border). In that one place in Krempna, there were 2,500 people praying the rosary.”

Kotula said there were many young adults and children there: “About half were young people and families with children.”

The day began with Mass and sermons about the rosary in “every place in Poland,” Kotula continued. “Then the trip to the border and then finally from 2 p.m. until 4 p.m. there were the four parts of the rosary.”

The atmosphere, he said was “uplifting, joyful and pilgrimage-like.”

“We knew that simultaneously a million Poles were encircling our beloved Motherland with the prayers of the Rosary.”

Daria Pietrzak of Częstochowa went to Turza Śląska with, she told LifeSiteNews, about 3,000 other people.

“The majority were over 50 years of age,” she said. “But there were a lot of young people, too.”

She attended Mass in Turza Śląska’s Shrine of the Mother of God in Fatima (i.e. Our Lady of Fatima). Not all 3,000 people could fit in the church.

“Despite the rain, they prayed outside,” she said. “There were moments when the sun shone and the rain fell at the same time. Apparently in many places rainbows appeared after 2 p.m.”

Pietrzak described the mood as “focused.”

“We felt that we were doing something very important, that it was a historic event,” she said. “We were very proud as Poles that the initiative had gathered a million Poles to the borders of all Poland. There was a fantastic feeling of connection, that at that moment, all of Poland was encircled by a rosary. There was spiritual unity.”

Jacek Kotula called worries that the Rosary at the Borders was xenophobic or anti-Muslim “nonsense.”

“It’s complete nonsense. There wasn’t a single anti-Islamic act! We wanted to apologize and do penance with our rosaries for the great blasphemies and insults committed against the Immaculate Heart of Mary. We prayed to Mary for the salvation of Poland and the world.”

“This is not a one-time-only event,” Kotula continued. “Millions of Poles pray the rosary every day, and this is something ordinary. But what is extraordinary is that we have united ourselves in the “Rosary to the Borders” and have joined together our prayers and strengths.”

Organizer Maciej Bodasiński told LifeSiteNews that he hadn’t witnessed miracles during the Rosary to the Borders, but that various people had sent him photos of the rainbows they witnessed during the prayers.