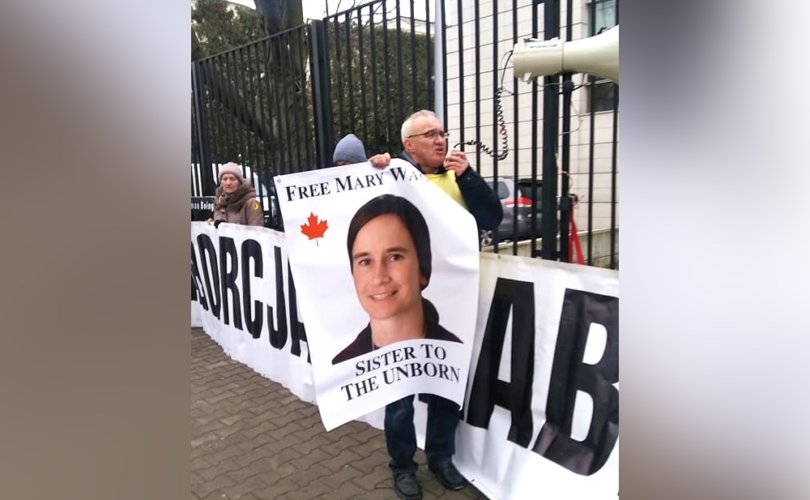 WARSAW, February 12, 2018 (LifeSiteNews) – Just because jailed pro-life heroine Mary Wagner is celebrating her birthday locked-up in a Canadian prison does not mean that she is forgotten.

Wagner's friends and supporters in Poland marked the occasion of the 44-year-old's birthday by picketing the Canadian Embassy in Warsaw from noon until 2 PM today. The event included prayers, speeches, and birthday cards for Wagner.

Przemysław Sycz of the Polish Right-to-Life Foundation told LifeSiteNews that “about 50” protesters took part in the peaceful demonstration. They carried signs in English and Polish.

One large poster featured a photograph of Wagner praying with the caption, “Mary Wagner, prisoner of conscience, persecuted for saving children; are you not ashamed, Canada?”

The picket was preceded by a special Mass at St. Alexander’s Church in Warsaw’s Three Crosses Square, where believers offered up prayers for the imprisoned woman.

Wagner, 44, was arrested December 8 at Women’s Care Clinic in Toronto after she and a friend entered the abortion center with red roses and attempted to persuade women to choose life for their unborn children.

Wagner was charged with mischief and two counts of breach of probation. She has been in jail since her arrest because she will not agree to bail conditions requiring her to stay away from abortion centers.

She will be representing herself at her trial, which has been set for March 5 and March 7, and will be held at 1000 Finch Avenue West in Toronto.

Wagner has been imprisoned for pro-life witness several times since her first arrest in 1999.  She has been a folk hero in Poland since news of her 2012 imprisonment reached that very pro-life country, and she was given a hero’s welcome there in 2014.  Many Poles find Canada’s laissez-faire attitude towards abortion shocking, and some unabashedly draw parallels between Canada’s abortion mills and the concentration camps Germans built in occupied Poland.

“The official charges laid against our heroine are ‘interfering with business operations,'” wrote journalist Paweł Heliński in Pressmania.pl. “In Nazi Germany, it was possible to find similar paragraphs – for example, when disrupting the process of producing soap from the remains of the bodies of concentration camp victims.”