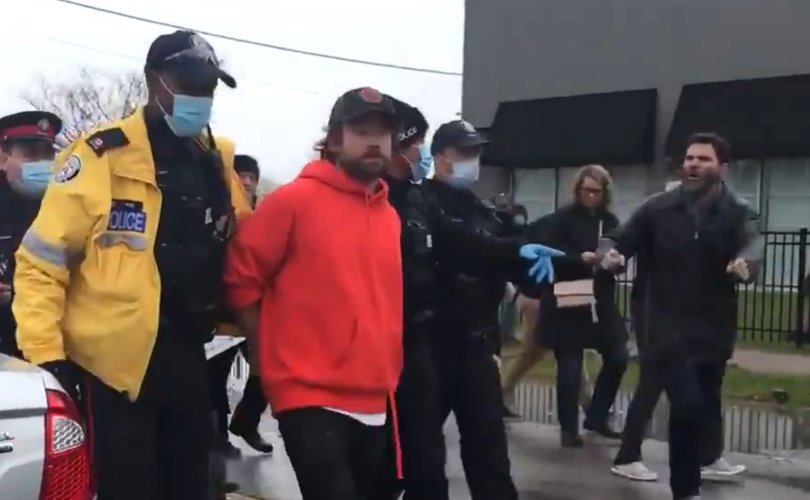 TORONTO, November 27, 2020 (LifeSiteNews) — A Toronto restaurant owner who announced earlier this week he was keeping his business open despite lockdown measures was arrested Thursday and taken away in handcuffs.

Toronto police arrested Adam Skelly, the father of two young children, around noon outside his Adamson BBQ in Etobicoke.

Skelly is facing 13 charges, both criminal and non-criminal, including trespassing, intent to obstruct police, violating indoor dining rules, holding an illegal gathering and operating a business without a licence, the CBC reported.

Rebel News, which has been following Skelly’s story, was onsite at Adamson’s BBQ livestreaming Thursday’s developments, and posted a Tweet of his dramatic arrest:

Rebel News also posted footage of the large police presence outside the restaurant:

Adamson BBQ UPDATE: Free Adam Skelly!@ezralevant and @SheilaGunnReid are LIVE for SPECIAL COVERAGE of the arrest of #AdamSkelly of @adamsonbarbecue in Etobicoke, Ontario.

Following Skelly’s arrest, some of the anti-lock protestors gathered at the site to support him then “moved to Premier Ford’s house,” according to a tweet by Hayley Cooper of Newstalk 1010.

The gang of protestors outside the BBQ restaurant in Etobicoke have moved to Premier Ford’s house. They just tried swarming me, and two camera men from City TV and Omni. Police are holding them back. pic.twitter.com/xAXtY0gGjV

On Wednesday, Ford called upon Skelly to close his business.

“You’re putting people's lives in jeopardy. I always try to be nice the first time, but this guy is just totally ignoring public health officials,” he said at a press conference in reference to Skelly.

Skelly told the Post Millennial that “I will continue to act in noncompliance with these orders and see what kind of support we have today.”

He added: “If anyone sees this as an inspiration to stand up and open their business, that’s amazing.”

Ford’s office released a statement in response to protestors arriving outside his Etobicoke home.

“The gathering outside the Premier’s home today goes beyond acceptable political protests. While the Premier recognizes every Canadian’s right to protest, neither his family nor his neighbors should be subjected to this kind of harassment and intimidation,” it stated.

“These protests have been ongoing for several weeks. We are pleading with them to leave those who have nothing to do with our government’s policies alone.

Ford stated in October that people have been protesting mask mandates every Saturday outside his home for weeks.

Skelly opened his business Tuesday. On Thursday around dawn, Toronto police officers and city officials arrived around dawn and changed the locks on the building.

According to a tweet by City of Toronto communication director Brad Ross, Skelly “was permitted to enter a portion of the building, where there is no access to the restaurant, to obtain personal belongings. The order to change the locks and prohibit entry currently applies only to the restaurant (eating and food prep area of the building).”

The same day, an energized crowd who banged pots and pans with gusto took part in an anti-lockdown protests at Queen’s Park organized by MPP Randy Hillier. Estimates of the numbers varied from 400 to 1,000.

As well as Hillier, a lawyer from the Justice Center for Constitutional Freedoms, a pastor, a journalist, and a physiologist denounced the lockdowns as an unjustified infringement on individual freedoms that are doing far more harm than good.

Hillier, MPP for Lanark-Frontenac-Kingston, told the crowd they need to support Skelly and urged those who could to head over to Adamson BBQ at the conclusion of the rally.

“Every small business owner in this bloody atrocious grey zone, and indeed, wherever there’s restrictions, need to stand up with Adam, they need to open up their businesses, and they’ve got to tell government they’re not going to get screwed any longer.”

Toronto police later ticketed Hillier for organizing the protest, but there was no set fine on the ticket, according to CP24. He was charged under the Reopening Ontario Act and is to appear in court on January 7, 2021, reported Global News.

Toronto and Peel area were classified as “grey zones” effective November 23, which have the most severe coronavirus-related restrictions of the province’s five “zones.”

The restrictions include limiting outdoor organized public events or social gatherings to a maximum of 10 people — which made Hillier’s protest a violation of the measures.