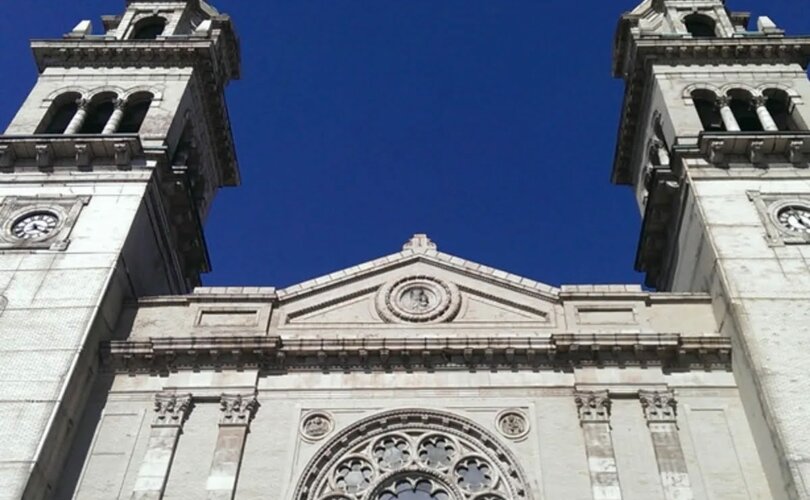 (LifeSiteNews) — Five people were arrested Tuesday morning after peacefully attempting to block the removal of a Pietà statue from the grounds of Chicago’s St. Adalbert’s Catholic Church, which has been slated for sale to the owner of the profane “Temple House” event venue.

The beloved statue is a faithful replica of Michelangelo’s famous “La Pietà” sculpture, which depicts the body of Christ held in the arms of his mother after the crucifixion. Its removal is understood by many locals to pave the way for the end of St. Adalbert’s as a church.

Anina Jakubowski, who attended St. Adalbert’s since she was a child, shared with LifeSiteNews that Tuesday’s human “blockade” began when she walked toward the flatbed truck carrying the Pietà sculpture, and was about five feet from the vehicle when it stopped. The driver tried to “wave her away,” but she stood her ground.

“The police came right away because they saw the truck had stopped. They wanted me to move. I just kind of stood there and the rest of the protesters came and started standing there,” said Jakubowski, adding that they delayed the truck’s departure for anywhere from 30 to 45 minutes.

Jakubowski had already left to speak with Archdiocese of Chicago employees by the time police intervened, giving three warnings and then handcuffing the few remaining protesters: Władysława Domaradzka, Andrzej Bobak, Judy Vazquez, Roman Waksmundzki, and Rosa Ibanez, according to Smaglick.

Former St. Adalbert’s parishioner Stanislawa Kaczynski shared that protesters on site were praying as the evacuation of the Pietà statue began, and that two of them had approached the workers to attempt “negotiations,” to no avail.

Jakubowski said that as the arrested protesters were being loaded into a police car, she made her way to St. Paul’s Catholic Church, where the Archdiocese of Chicago had arranged for the statue to be moved, and with which St. Adalbert’s merged upon its closing in 2019.

“After maybe about 12:30 is when they got [the statue] into St. Paul’s, they locked her in,” Jakubowski said.

Former parishioners and other locals have been fervently striving for over three years to prevent the removal of the Pietà statue and St. Adalbert’s sale “to the highest bidder” with prayer, protests, and even campouts outside the church.

Pilsen resident and retired Chicago Public Schools teacher Dalia Radecki told the Chicago Tribune, “Some of us were sleeping in cars and trucks out in the cold, protecting the Pietà because it’s so sacred to us,” she said last month. “It’s going to be a very sad and traumatic day for a lot of us when it’s removed.

Efforts to deport the sculptural gem began in late August but were stalled when Pilsen Alderman Byron Sicgho-Lopez called out city officials for lacking the needed permits to do so.

The city procured the necessary permit for the statue’s removal earlier in November, and finally on Tuesday morning, workers set about hauling the statue out by forklift through a hole carved out in the church’s east transept wall.

The Archdiocese of Chicago defended its decision in a September statement, arguing, “Parishioners will have access to worship before and better enjoy the sculpture in its new home,” and that the statue “can be better safeguarded and preserved in an active parish church.”

The statue is, in and of itself, a precious and stunningly beautiful treasure, as is the original sculpture upon which it is modeled. According to Julie Sawicki, president of the Society of St. Adalbert, the statue’s Carrara marble was mined from the same quarry that Michelangelo used for the original Pietà.

However, what is most tragic about the statue’s removal to those concerned is that it marks the onset of St. Adalbert’s gutting in preparation for its sale to commercial buyers.

In fact, the church has recently been slated for sale to the owner of the profane Temple House, a building that formerly served as an Orthodox Jewish temple but is now a luxury event venue that hosts lewd performances.

To Kaczynski, the loss of the Pietà sculpture goes hand in hand with the devastating loss of St. Adalbert’s.

“We [have been] praying for this church … every Friday we’re here, no matter what the weather: rain, frost, heat,” she told LifeSiteNews, sharing how she and others have been meeting by the grounds of St. Adalbert’s for prayer rallies since it closed over three years ago.

“We just want the church to be [a] church. Our great-grandfathers built this with sweat, blood, and tears. They built the church. Now they want to destroy everything. Why? For money,” Kaczynski said.

Smaglick further highlighted that “St. Adalbert’s was paid for through the great sacrifices of Polish immigrants who came to America in the late 19th and early 20th centuries, people who made it their highest priority to conform their wills to the Will of God. Churches such as St. Adalbert’s testify to that. It was created to last forever.”

Jakubowski, who said she and her seven siblings all received their sacraments at St. Adalbert’s, said of the ordeal, “It’s been breaking my heart. We’ve been fighting close to seven years.”

“I’ll tell you why I’m fighting. Because my mother loved this church,” she went on, sharing that her now late mother had helped spearhead efforts to save St. Adalbert’s when Cardinal John Cody tried to close it in 1974.

St. Adalbert’s closure is part of a larger trend in the Archdiocese of Chicago of shutting down churches amid demographic collapse. In fact, the church closures are considered part of the “structural change” that the archdiocese maintains is necessary to create “stronger, more vibrant parishes in the future.”

“All of the people that were affected with closed churches, they were saying this is more ‘destroy your church,’ not “Renew my Church,” Jakubowski said.

Smaglick underscored the gravity of the broader pattern of church closures as well as of the planned sale of St. Adalbert’s in particular to a businessman with a track record of sordid and even sacrilegious use of buildings.

“When the Church is surrendering some of the greatest of its historical and architectural treasures to the secular world, in this case for what we know to be sordid use, with familiar secrecy and callousness, serious questions need to be asked by the Pope and others at the Vatican,” Smaglick remarked to LifeSiteNews.

“We need to address why we’re giving up on these treasures of the faith in response to declines in Mass attendance when the traditional parts of the Church are growing and thriving, not only in Chicago, but in many places around the world,” he continued.

Smaglick pointed out that “Cardinal (Blase) Cupich recently sold the parking lot at his Holy Name Cathedral for over $100 million and very large sums of money are being transferred to churches favored by the Cardinal.”

“Could some of this not be used to preserve the historic epicenter of Chicago’s Polish Catholic culture?  If not, can’t we at least be given the opportunity to fund its preservation through other means?”

“The leaders of our church are giving up on these churches in just the same way that they’re giving up on fidelity to the Word of God. It’s no coincidence that solving the second of these problems yields the solution to the first.”