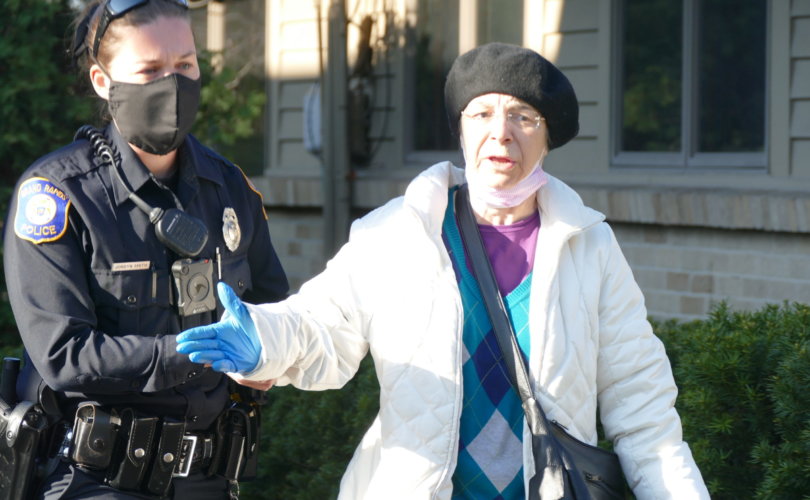 Dr. Monica Miller being removed from the abortion center's parking lot by the Grand Rapids police.

UPDATE (May 15, 5:25pm): LifeSite reached out to the WOOD-TV 8 newsroom on Thursday, May 14 to inform them they had “inaccuracies” in their report. The man who answered said that the newsroom already spoke with witnesses and the police and that they are “good to go” with the story. LifeSite asked him what witnesses he spoke with and he said, “well, it doesn't really matter.” As LifeSite began informing the man we had video proof showing the women who were arrested did not enter the facility, the man hung up. Dr. Monica Miller called the newsroom earlier in the week requesting the story be updated as well but no change was made. However, on Friday, May 15, Heather Idoni, one of the women who was arrested, called the WOOD-TV 8 newsroom. Idoni told LifeSite the person who answered her call hung up on her when she began telling them they needed to correct their report. Idoni called again and said the woman who answered was more receptive and told her she would “look into it.” At 3:46pm on Friday, WOOD updated their report, noting that Idoni claimed she didn’t enter the building.

UPDATE (May 14, 10:45am): A Freedom of Information Act request has been submitted to the Grand Rapids Police Department in order to learn what the specific charges against Heather Idoni and Caroline Davis were. At present, their case is still considered “open,” which may delay the request. LifeSite has also reached out to the lead detective in the case, William Recor. All individuals who received trespassing citations will be pleading not guilty. This story has also updated what happened to Idoni and Davis after they were taken into police custody. The Grand Rapids police told local media that the pair entered the facility and shouted at women, which is what lead to their arrest. But Idoni and Davis did not enter the building. More updates will be provided as they become available.

GRAND RAPIDS, Michigan, May 13, 2020 (LifeSiteNews) — Two arrests and five trespassing citations were issued this week Wednesday during a Red Rose Rescue performed at an abortion mill in Grand Rapids, Michigan. The rescue, the fourth held in Michigan since September 2017, was organized by Citizens for a Pro-Life Society, a Michigan-based anti-abortion group led by veteran activist Dr. Monica Miller.

Approximately 35 pro-life protestors appeared outside Heritage Women’s Center at 320 Fulton Avenue today beginning at 8:00 a.m. Dr. Thomas Gordon commits abortions inside the facility. Pamphlets with a list of Gordon’s prior civil and health code violations were distributed outside. Some protestors held signs with pro-life messages on them while some prayed silently and others shared Christian messages of hope and love to pregnant women as they entered the facility’s side door.

The six rescuers took turns walking into the parking lot behind the facility and offered to help women in any way they could with their pregnancies. Several men, presumably boyfriends and husbands, were also seen leaving the property. One of them told Miller there was “something wrong with the baby” and that abortion was “the only choice.” A rosary could be seen hanging on the rear view mirror of his car as he sped away.

Dr. Gordon immediately confronted the rescuers when they started their activism, sticking his head outside the center’s door on multiple occasions to yell at them. At one point he threatened to kill Ann Norton, an elderly woman. “‘If you don’t get off my property — and then he put his hands in the shape of a gun — then I’m going to shoot you!,” she said he told her.

It was around the time of that incident when two officers from the Grand Rapids Police department showed up to warn the rescuers that they were trespassing. The rescuers, however, were undeterred. As more cars pulled in, they walked up to them and offered women red roses as a symbol of life. Attached to the roses was a card stating: “You were made to love and to be loved… your goodness is greater than the difficulties of your situation. Circumstances in life change. A new life, however tiny, brings the promise of unrepeatable joy.” The cards also featured the phone numbers of local pregnancy help centers.

Approximately 12 vehicles pulled into the parking lot this morning. Leisa Snow told LifeSiteNews that that number was half of what normally occurs. She said that the presence of the protestors on the sidewalk likely deterred “a good number” of women scheduled for abortions today.

Most of them likely decided to just keep on driving by when they saw the large crowd, she remarked. “This was a total disruption to their daily operations.”

Police showed up again to warn the rescuers that they were trespassing. Clearly frustrated, one officer began raising his voice, telling this journalist, who was photographing the rescuers as they pleaded with the pregnant women, that he needed to get off private property or else he would be detained. I had been momentarily standing in a grassy area behind the center’s parking lot.

Police then placed Miller, Kolavy, and Connolly into the back of their vehicles, although they were never handcuffed. Miller, who had momentarily entered the facility’s stairwell earlier in the morning, says she successfully talked the officer out of arresting them. She told LifeSite that the officer was complaining to her about having to be at the abortion center because there were “homicides” in the area he needed to focus on. Miller agreed with him, but pointed out that there are “homicides taking place right here inside this facility right now.” She and Kolavy were eventually issued a ticket for trespassing. Connolly did not receive a citation. Neither Miller nor Kolavy stepped foot on the parking lot again the entire morning.

For the next half hour activity outside Heritage Women’s Center seemed to calm down. Fewer cars were pulling in and police had not been around to check up on the rescuers. An egg, however, was thrown at the protestors standing on the sidewalk from a passing vehicle. One witness claims it came from a car that had previously been parked behind the abortion facility. Two counter-protestors eventually showed up as well.

Around 10:30 a.m. police were called back to the location, likely due to phone calls they received from a woman who was sitting in her car in the parking lot and waiting for her friend inside the center. Caroline Davis, 21, had been preaching the Gospel non-stop in a loud voice from the sidewalk in front of the facility.

The abortion center’s counseling supervisor, Kelly Benzin-Brinks, also came outside and could be seen complaining to the officers, who were not the same ones from earlier in the morning. The new officers, Timothy Fischer and Jordyn Smith, informed the protestors that the driveway to the parking lot must remain clear and unobstructed. The pro-lifers agreed and thanked the police, who left but parked in a nearby elevated parking lot adjacent to a Masonic Temple a half block away where they could still see the abortion center.

Soon after that warning was issued and the police left the premises, Heather Idoni approached a woman in the parking lot around 10:45 a.m. The two police officers returned. Without any warning they handcuffed and patted Idoni down. She was then placed in the back of the police vehicle.

As Idoni was being arrested, Davis, who hails from the state’s east side, was begging the officers to not arrest her and to listen “to God’s law” and not enforce laws that allow abortion to occur. Davis, like all of the other protesters, was standing on the sidewalk witnessing Idoni’s arrest as she spoke. Despite that, the male police officer singled her out. He came up to her and without any warning grabbed her arm, lead her to his vehicle, patted her down, and handcuffed her. LifeSiteNews repeatedly asked the police officer what the charge against Davis was but received no answer. Both Idoni and Davis were taken away in the back of the police vehicles.

Miller and the other rescuers remained at the facilty until 12:00 p.m. Both Idoni and Davis were brought to the Kent County Jail, where they remained in the booking area. Idoni told LifeSite that they were released around 1:00pm. She said it felt like they were trying to get them released “very quickly.” They were let go on a $500 personal recognizance bond. They, as well as the other rescuers, will be appearing at the 61st District Court at 8:30am, Wednesday, May 20.

MLive.com, a local media outlet, reported the incident in this way:

“[Sgt. Dan] Adams said he believed officers ‘didn’t have much of a choice’ in making arrests after two of the protesters stepped inside the clinic despite repeated warnings.”

“Sgt. Dan Adams with GRPD said after officers repeatedly tried to instruct and warn protesters not to enter the facility if they weren’t welcomed, three people were ticketed for trespassing.

Despite the warning, two more people went into the building and yelled at employees and others inside, police say. The two people were arrested and taken to the Kent County Jail.”

No warning was ever given to Idoni or Davis individually by police and neither entered the facility. Idoni did tell LifeSite that she approached the center’s door at one point but did not enter it because the clinic director was standing on the other side. Davis herself stepped on the parking lot on mulitple occasions throughout the morning but was never given a warning by any police officer to not do so again. She was on the sidewalk outside the facility when she was arrested, having never entered the facility the entire time she was there.