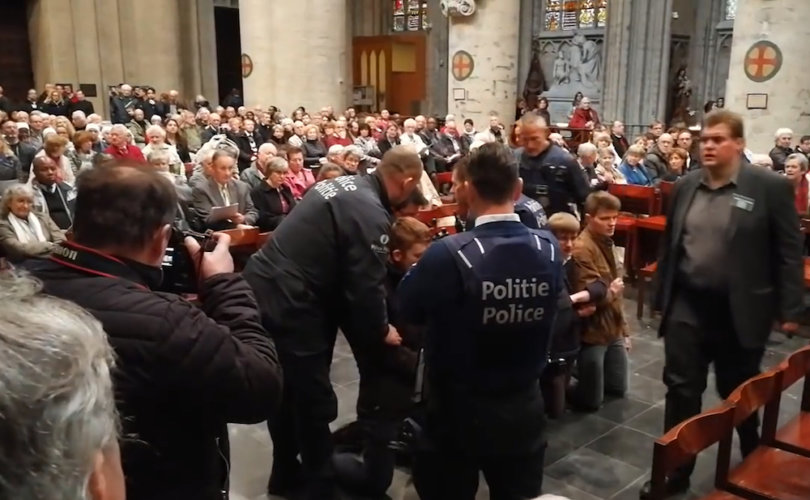 October 31, 2017 (LifeSiteNews) – A group of 11 Catholics were arrested by Belgian police for praying the rosary during a service commemorating the Protestant Reformation at the Catholic Cathedral of St. Michael and St. Gudula in Brussels on Saturday, according to local media.

The Protestant worship service was led by Pastor Steven Fuite, president of the United Protestant Church of Belgium, with the “active participation” of Cardinal Jozef De Kesel, archbishop of Mechelen-Brussels, and by numerous other religious and civic leaders. Fuite preached a sermon at the event, and a collection was made to raise money for two Protestant organizations.

After the opening hymn, a group of Catholics, including 10 men and one woman, knelt together on the floor behind a row of pews, locked arms, and began to pray the rosary, making it impossible for Fuite to begin his sermon. They also distributed flyers denouncing the event as a “profanation.”

The police were called and the protestors were hauled away by force, and placed under administrative arrest, after which the service was able to proceed, according to the Belgian newspaper Le Soir, and documented by local media in a video posted on YouTube.

“Our cathedral of St. Michael and St. Gudula is a Catholic edifice built by our fathers to be the House of God, for the celebration of the holy Mass, for the praise of God and of the saints. The occupation of our cathedral by the Protestants to commemorate the 500th anniversary of the Reform is therefore a profanation,” stated the protesters in their flyer.

In effect, the supposed Reform was rather a revolt: on the pretext of combating abuses, Luther rose up against the divine authority of the Catholic Church, denied many Truths of the Faith, abolished the Sacrifice of the Mass and the Sacraments, denied the necessity of good works and the practice of Christian virtues. Finally, he attacked the cult of the Virgin Mary and of the Saints, the religious life and monastic vows.”

“This terrible revolution was a great drama for Christian society and for the salvation of souls. And the Lutheran errors are still heresies today because the Truth is eternal.”

The flyer ends with a quote from the ancient Athanasian Creed, which states, “Whosoever will be saved, before all things it is necessary that he hold the Catholic Faith. Which Faith except everyone do keep whole and undefiled, without doubt he shall perish everlastingly.”

The Cathedral of St. Michael and St. Gudula is of great symbolic significance in the history of the Protestant Reformation in Belgium. In the 16th century, it was the subject of brutal attacks by iconoclastic “reformers” who entered the building to break its stained glass windows and steal the relics of the saints.

Fuite told Le Soir that his church is a “truly democratic structure” that permits women and homosexuals to be ministers and blesses homosexual couples.

“Our church is a truly democratic structure … Today, one pastor out of every five is a woman. Since 2006, a couple of the same sex has been able to ask for a blessing and in June of 2015 the assembly of the Synods has decided that homosexuality would no longer be an obstacle to becoming a pastor,” said Fuite.

“The Protestant has always had a problem with authority,” Fuite added. “If you have issues regarding personal or ethical matters, such as euthanasia for example, the Church doesn’t take a position, you are free to live your life in accordance with your understanding.”

Fuit also stated his view that diversity of beliefs is necessary for unity. “Our unity is placed essentially in respect for differences. Without the other who is different, who thinks differently, who acts differently, I don’t exist, I am nothing.”

The commemoration follows a number of similar events held by Pope Francis, which have caused much consternation among faithful Catholics and raised questions about the pope’s own understanding of the Catholic faith.

In October 2016, Pope Francis traveled to Lund, Sweden, to meet with Lutherans and to launch a yearlong commemoration of the anniversary of the launch of the Reformation. Included in the scheduled program was a prayer giving “thanks” to God “for the many guiding theological and spiritual insights that we have all received through the Reformation,” and added, “Thanks be to you (God) for the proclamation of the gospel that occurred during the Reformation and that since then has strengthened countless people to live lives of faith in Jesus Christ.”

In January 2017, the Vatican’s Pontifical Council for Promoting Christian Unity issued a joint statement with the Lutheran World Federation stating that “Catholics are now able to hear Luther’s challenge for the Church of today, recognizing him as a ‘witness to the gospel.’” In the same month, the Vatican announced that it would be issuing a commemorative postage stamp with Luther’s face on it.