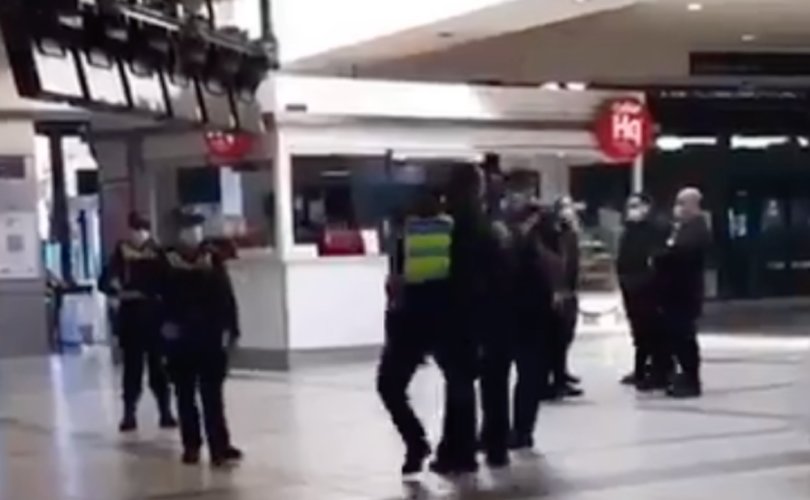 MELBOURNE (LifeSiteNews) — A conduct investigation is reportedly underway after a video circulating widely on social media showed police in Melbourne brutally assault a man by slamming his skull into the hard floor of a railway station.

Police allegedly confronted the man last Wednesday after he participated in protests against the harsh measures enacted during the city’s sixth lockdown.

The incident, which immediately went viral on social media, took place at Flinders Station, a railway station in Melbourne, the capital city of Australia’s state of Victoria.

In the video, police officers are seen speaking with a man who appears to be calmly answering questions. Another officer then rapidly moves into the frame and, seemingly without provocation, seizes the man from behind and throws him to the ground.

When Shane Patton said they won’t hesitate to use force

I think this was his vision 😬😬😬 pic.twitter.com/zpdLDa5ttL

The sound of the man’s skull hitting the floor can be heard in the recording.

“This poor guy was calm, he was just talking to the police, you can see it in the video then he gets thrown to the ground,” the caption on the original video read.

The man was reportedly rendered unconscious by the assault.

The witness who filmed the incident told news.com.au “when he woke up he was calling for his mum.”

‘We are all very disturbed by this and I’ve been inundated with people worldwide wanting to know if this man is alright,” the witness said, adding that “[w]e understand the paramedics looked at him but not sure what happened after that.”

Under Premier Dan Andrews, Victoria’s lockdowns over the past year and a half have been particularly harsh, with residents subject to curfews, travel restrictions, and bans on public gatherings. The draconian lockdowns have spurred repeated protests leading to intense confrontations with law enforcement officers.

The brutal police action at Flinders Station occurred during the fourth day of anti-lockdown protests last week which have swept Melbourne as the beleaguered city endures its sixth strict lockdown since the onset of the coronavirus pandemic.

It is unclear what specific events led to Victorian police subjecting the man at Flinders Station to such brutal physical violence.

— Article continues below Petition —
BOYCOTT United over religious and medical COVID vaccine exemptions
Show Petition Text
21728 have signed the petition.
Let's get to 22500!
Thank you for signing this petition!
Add your signature:
Show Petition Text

On Thursday, Police Commissioner Shane Patton told reporters that an investigation would be underway to determine the “full circumstances” of the incident.

“We’ll investigate that. I don’t know what the full circumstances are,” Patton told 3AW.

Saying he’s not “jumping to any conclusions,” the commissioner said that “there’s always context to everything,” and assured reporters the incident would be investigated “with an open mind.”

Patton said the officers beating back private citizens protesting government lockdowns have been overall “responding proportionately in an environment that was dynamic, threatening and frightening.”

“I couldn’t be prouder of them,” Patton said. “What they’ve done and the way they’ve conducted themselves.”

Acknowledging that “there’ll be incidents that appear, or may be inappropriate,” the commissioner said that “any of them that are, we will fully investigate”.

Writing for Sydney Criminal Lawyers, Sonia Hickey decried the brutal assault at Flinders Station, saying it could have proved fatal.

“In amongst all the footage of this week’s Melbourne protests, a horrific video has emerged of a police officer approaching a man from behind and violently throwing him head first to the ground at Flinders Station in the CBD – in an attack that had the potential to prove fatal,” Hickey said.

“The man is standing alone and talking to police officers, when an officer approaches him from behind, grabs him by the shoulders and violently slams him against to the hard floor,” Hickey recounted, noting that “[w]itnesses reported that the man was knocked unconscious, and left in a pool of his own blood and urine.”

Hickey expressed reservation as to whether the incident would undergo proper investigation.

“In Victoria, the Police Conduct Unit initially investigates complaints of misconduct,” Hickey said, adding that the oversight body, known as the Independent Broad-Based Anti-Corruption Commission (IBAC), may be tasked with investigating any serious allegations of police misconduct.

Still, Hickey said IBAC is “chronically under-resourced and has no power to discipline, let alone criminally prosecute, police officers – it can only make recommendations, which may or may not be followed by police or the DPP.”

Victorian law enforcement officers have sparked criticism for their heavy-handed treatment of citizens, many of whom have lost jobs and been separated from family as a result of crushing lockdown policies as Australia attempts to eliminate COVID-19 from the continent.

In last week’s protest, which was spurred on by opposition to a COVID vaccine mandate for tradespeople, many in Melbourne took to the streets to assert their rights.

Under current COVID protocols, public protest is illegal in the city, with residents not permitted to leave their homes except for brief periods of time for specific approved reasons.

Hundreds of protesters were arrested last week, and videos from the protests show police officers on horseback and in riot gear engaging in violent confrontations with protesters.

Police have announced they will be “less tolerant” of anti-lockdown protesters in future confrontations.

“This follows the broad use of tear gas, pepper pellets and stinger grenades against protesters,” Hickey observed, noting that “it is unclear as to what this reduced tolerance will entail.”

On Thursday, anti-lockdown protesters were stunned by Victorian Police’s show of force, as battalions of heavily armed police supported by Counter Terrorism units patrolled the streets of Melbourne’s CBD (Central Business District). This coincided with the introduction of extraordinary tactics such as the temporary restricted airspace order over Melbourne’s CBD to prevent media from filming police operations.

Video has also emerged of riot-gear-clad officers shooting protesters with rifles loaded with rubber bullets at the Shrine of Remembrance, a memorial set up to honor fallen military heroes who died defending Australians’ freedom.

Aussies are now getting shot in the back as they run away from the police.

Is this for their health too? pic.twitter.com/eL59DTgVhM

In another video, officers can be seen pursuing fleeing protesters, shooting them in the back as they run away.