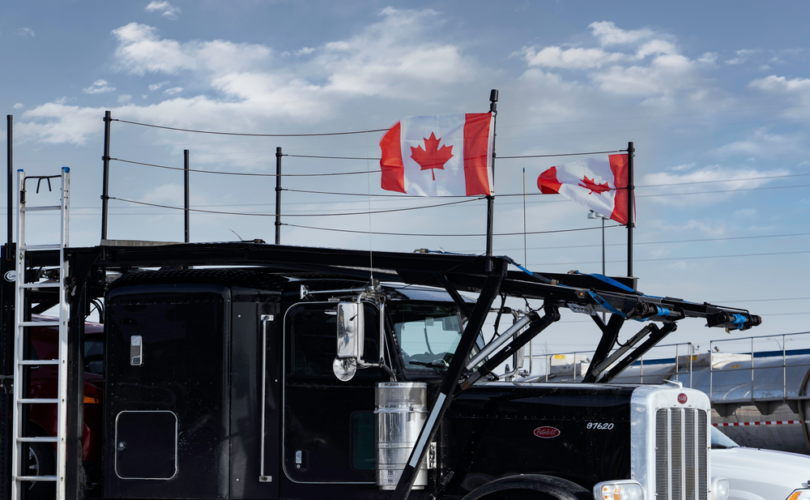 COUTTS, Alberta (LifeSiteNews) — Canadian police sabotaged three excavator vehicles parked on private property by cutting their electrical and control cables in order to prevent their use in a southern Alberta blockade.

The Royal Canadian Mounted Police (RCMP) said they “disabled” the excavator vehicles to prevent them from being used in the vehicle blockade at the U.S.-Canada border near Coutts, according to CBC News.

“We continue to work with our efforts to put an end to this illegal blockade and I’m sure that will continue in the days to come,” said RCMP Cpl. Troy Savinkoff.

Rebel News shared a video showing that numerous wires were cut in the vehicles, with one man explaining filters were also removed and spray foam was “put up fuel lines” to cause further damage.

He said the vehicle operators were asked by RCMP to take their vehicles out of view of the highway, and so they “obliged them” and parked them on private property with the permission of the owner.

When they returned to the excavators, they found they had been sabotaged.

“They’re valuable machines, and it’s gonna take a lot of work to put them back into order,” he added.

Semi-trucks, cars, and farm equipment began to assemble in a blockade of the U.S. border in southern Alberta on January 29 in support of the Canadian convoy to Ottawa aiming to reverse COVID mandates for unvaccinated truckers, according to the Calgary Herald.

“If participants in this convoy cross the line and break the law, I expect police to take appropriate action,” Kenny said in a statement. “Operational enforcement decisions are the responsibility of police services … Alberta’s Critical Infrastructure Defence Act gives police and prosecutors additional penalties to levy as a tool to address blockades of highways and other infrastructure when and where they deem appropriate.”

It is unclear whether preemptive damage by police to vehicles parked on private property qualifies as an “operational enforcement decision” green-lighted by Kenny.

Alberta truckers stood firm even after being threatened with jail by government and law enforcement officials. Rebel News videographer K2 tweeted footage of truckers saying the Lord’s Prayer in unison the morning of January 31.

The RCMP arrested 11 people today in Coutts they claimed were “associated with the blockade who had access to a large collection of guns and were willing ‘to use force against the police if any attempts were made to disrupt the blockade,’” the Toronto Star reported.

Prime Minister Justin Trudeau announced today that he is invoking the Emergencies Act for the first time in Canada’s history to grant the federal government special powers to disband ongoing blockades and COVID mandate protests.

Such powers will include ensuring that towing services to remove blockade trucks are dispatched, to “secur[e] critical areas” like border crossings, reported CBC News.

“It is now clear that there are serious challenges to law enforcement’s ability to effectively enforce the law,” Trudeau told a news conference this afternoon.

Conservative MP Pierre Poilievre “said he supports peaceful protests but not blockades,” according to CBC News.

“You know how we can put an end to both of them? Real simple. Listen to the science, do what other provinces and countries are doing, that is to end the mandates and restrictions so protesters can get back to their lives and their jobs,” he said Monday.

Leah West, an assistant professor in international studies at Carleton University who has published a book on national security law, said of Trudeau’s measure, “I have real concerns about fudging the legal thresholds to invoke the most powerful federal law that we have.”

Alberta Premier Jason Kenney has expressed concern that “if the federal government proceeds with this,” some people “will be further inflamed,” which could lead to “prolongation of some of these protests.”

Bed and breakfast owner Keith Dangerfield told LifeSiteNews that he supports the protests, pointing out that politicians claimed they needed “two weeks to flatten the curve,” but that it’s now been “two years.”

Regarding the police, he said, “I don’t want to alienate them in any way. But the thing we’ve got to fight for is what’s right.”

He continued, “Our desire to see the country not go back to where it was, but go ahead to something that’s even better than what we had before, and I don’t think that we’re gonna do that without this kind of protest.”

LifeSiteNews reached out to Alberta RCMP for comment but had not heard back at the time of publishing.

To contact your MP and make your opinion of this matter known to him or her, please use this link.