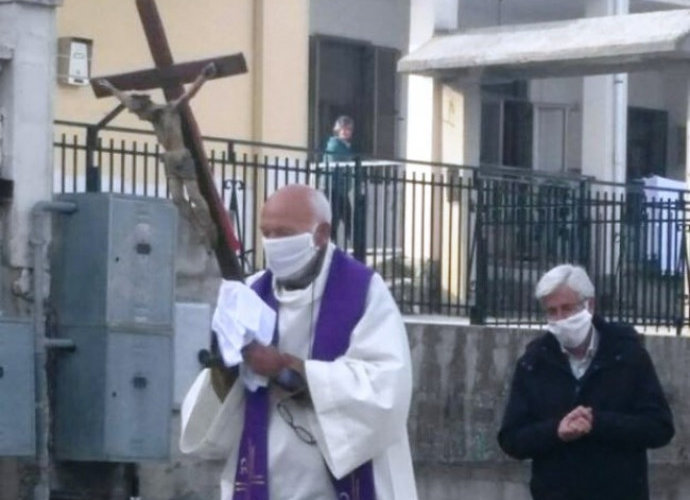 ROCCA IMPERIALE, Italy, April 6, 2020 (LifeSiteNews) ― A priest was fined and sent into quarantine for carrying a miraculous crucifix through the streets of his town.

Fr. Domenico Cirigliano, a parish priest in Rocca Imperiale, a town of 3,330 in Calabria, was ordered into an effective house arrest for 14 days despite preserving a distance between himself and other people. Cirigliano was also ordered to pay a 400 Euro ($432 U.S.) fine, which he refuses to do.

According to Italian Catholic newspaper La Nuova Bussola Quotidiana, the procession involved only the priest and an assistant, who stayed well back from him.

La Nuova Bussola Quotidiana stated that although this punishment was “incredible,” it was a “natural continuation” of the Italian state’s “arbitrary restrictions” impeding freedom of religion in the country.

In an interview with the newspaper, Fr. Cirigliano said the crucifix, which once was seen to bleed, is annually taken in a procession around the town.

“To be precise, it was in 1691,” he said. “The crucifix poured out blood, and because of this miracle that day, every March 30 the sacred wood is taken from the church for a procession through the principal streets of the town.”

Cirigliano stated that he would not acknowledge the fine.

“I will not pay,” he told La Nuova Bussola Quotidiana.

“I’m simply not paying. I didn’t even sign the report, for that manner, because it’s only a way to punish the church.”

The priest revealed that it was well-known before March 30 that he was going to honor the annual devotion albeit in a most truncated form.

“Not being able to do the procession that we have done for over three centuries without skipping a year, I advised the parishioners that I would go through the main streets of the town blessing with the Crucifix,” Cirigliano said.

Some young people assisted him by advertising the event on What’s Up, and the people were happy to open their windows and doors so that they could see the crucifix and accept the blessing. However, on the morning of March 30, Cirigliano received a phone call from a boy parishioner, who said a certain police officer, called only “V” in the interview, was insisting that the procession could not go forward.

“I explained that it wasn’t a procession, or rather, that I was alone, there was only one parishioner with me, at a distance and wearing a mask, and that the objective was to protect the city from the coronavirus,” the priest recalled.

When two police officers confronted him outside and demanded his papers, Cirigliano said he was holding the crucifix so they should take the document themselves. After they removed his identity card, the priest kept moving.

“People greeted the crucifix from a distance; they were moved. They blew kisses and prayed. It was hard, but moving.”

When he returned to the church, the police officers were waiting for him with his identity card and a police report for him to sign. The report stated that the priest’s appearance in public was not motivated by “work situation or a situation of necessity or for reasons of health.” It said also the “transgressor, the pastor of the parish of the Blessed Virgin Mary,” had held a “demonstration/religious event” in a public place for half an hour, a walk that “has affected all the streets of the historic center of Rocca Imperiale.”

Cirigliano’s interviewer pointed out that in other places in Italy priests have processed in the streets with the Blessed Sacrament or a statue of the Madonna with the blessing of the civil authorities. The priest would not agree with the interviewer that Italy is in a state of police anarchy but agreed that there was no one standard.

“Here everyone interprets the norms as he likes and believes himself to be the Father Eternal,” he said.

Cirigliano said he was going to wait and see what his bishop achieved on his behalf but added that the situation was very bitter for him.

“I went out with the Crucifix to bless the whole city, all the inhabitants of Rocca Imperiale, including the police and the mayor; it is the Crucifix that must protect us,” he said.

“Instead, it seems that (the mayor) wanted to make this personal. I don’t think this is the right way to treat a minister of God.”

The mayor of Rocca Imperiale is Giuseppe Ranù, 45.