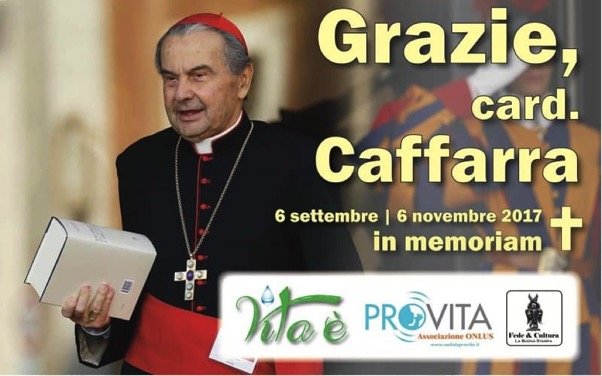 The pro-life groups ProVita Onlus, Vita è, and Fede e Cultura drove a publicity truck through the streets of Rome around the Vatican on Monday, bearing billboard-sized images of the dubia cardinal and Pope John Paul II.

The police had stopped them for questioning on the Via della Conciliazione, the central road leading to St. Peter’s Basilica. According to main organizer Toni Brandi, head of ProVita Onlus, at one point the police claimed Cardinal Caffarra “wasn’t in line with Pope Francis.” After two hours, organizers were ordered to report to the police station today at noon for further questioning.

This afternoon, following the interrogation, Brandi, published an article on the ProVita website describing his meeting with police. He claims that one of the police chief’s objections to the campaign was that “now the Church doesn’t talk so much about life.”

Here below is an English translation of the article describing the meeting.

“We stood up to defend life and the family”

The interview at the Borgo Police Station in Piazza Cavour (Rome) was polite and friendly and lasted about 45 minutes. I was interrogated as to the reasons why ProVita Onlus [a pro-life non-profit], along with Vita è [Life is] and Fede e Cultura [Faith & Culture] commemorated Cardinal Caffarra two months after his death, by drawing attention to his commitment to life and the family, and by tying him to the figure of Pope John Paul II, founder of the Pontifical Academy for Life, whose statement on the indissolubility of marriage was featured on our billboard-sized posters: “We will stand up when the institution of marriage is abandoned to human selfishness or reduced to a temporary, conditional arrangement that can easily be terminated, we will affirm the indissolubility of the marriage bond.”​

The police chief and four or five other policemen were present during the interview. Initially they asked me if we had authorization for the publicity truck. They then focused on our reasons: Who organized it? Who’s behind the initiative? Why was it done? Do the Vatican authorities know about it? I answered that I don’t believe the Vatican authorities were informed, but I didn’t see why we should have had to inform them. “But the Cardinal was from Bologna!” they said. “Yes,” I responded, “but Rome is the center of Christianity!” — “But now the Church doesn’t talk so much about life,” the police chief said. I replied: “But the Church has proclaimed — and many times — that she defends life.”

“But was it a campaign to raise awareness? A protest? Or only a commemoration?” they asked me. I replied that it was a commemoration of a great cardinal who died two months ago, and also an opportunity to remind Romans of these two great figures in the field of life and the family.

At the end of the interview, the police chief, who was very kind, seemed satisfied with the reasons I provided.

The reasons for the commemoration of a defender of life like Caffarra, by an association called ProVita, should be easy for anyone to guess. And they were clearly explained in yesterday’s press release: “Cardinal Caffarra was a friend and a model for us. He taught us that one can and one should spend one’s life for life, for the family, to care for the weakest among us, beginning with babies, before and after birth.”

Yet this event raises questions: I don’t believe that it was the celebration of two great figures of the Church that was the real annoyance. What irritated the establishment, what creates “problems of public order” for the one dominant mentality, is summed up in the words: “We will stand up to defend marriage.”

Marriage (true marriage, between one man and one woman, forever, open to the generation of life) and the family (real family, the natural one) have been in the crosshairs of the culture of death for decades. And it was Cardinal Caffarra who often recalled a letter sent to him by Sr. Lucia of Fatima, in which the visionary said: “A time will come when the decisive batter between the kingdom of Christ and Satan will be over marriage and family.”