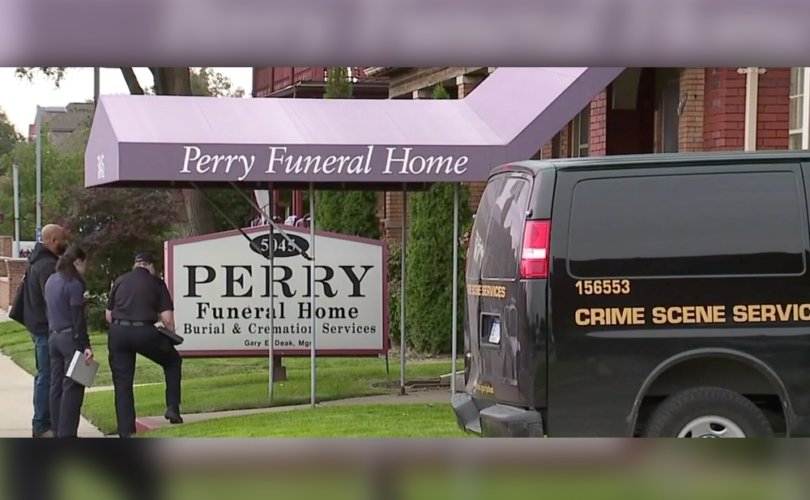 DETROIT, Michigan, December 11, 2018 (LifeSiteNews) – In the wake of the gruesome discovery of the remains of scores of fetal humans improperly stored inside one funeral home and 11 badly decomposed bodies of babies hidden in the ceiling of another nearby, police raided two Michigan cemeteries searching for additional violations.

In October, police found 36 pre-born babies kept in cardboard boxes and an additional 27 in freezers at Detroit’s Perry Funeral Home. The Michigan Department of Licensing and Regulatory Affairs (LARA) quickly shut down the facility.

Last week’s raids on the two cemeteries are a continuation of the investigation into the Perry Funeral Home, triggered by a tip claiming that between 100 and 125 fetuses were being improperly stored on the grounds of Gethsemane Cemetery.

When police arrived, they found 104 fetuses in a crypt, of which 17 were deemed to be not in compliance with burial regulations or lacking proper documentation.

A search warrant was served simultaneously at a second cemetery, Knollwood, where investigators found 345 unborn babies, of which 27 were in violation of burial regulations. Following the issuance of a cease and desist order, most of the operations at Knollwood were shut down the following day.

“That these unborn babies were left unburied, apparently their remains just left by their parents at the hospitals where they were miscarried and then simply ‘stored’ by the funeral home, really speaks to a serious ethical and spiritual issue,” Dr. Monica Migliorino Miller, director of Citizens for a Pro-Life Society, told LifeSiteNews. Miller, a Michigan-based veteran pro-life activist, recently buried 15 aborted children who were found in the trunk of abortionist Michael Arthur Roth’s car.

Miller’s group worked for two years to obtain from the county medical examiner the bodies of the aborted babies so that they could be given a proper Christian burial.

“The unborn and even the stillborn infants denied a proper funeral are not treated with the human dignity they deserve as fellow members of the human race,” Miller continued. “There is an underlying prejudice that fuels this disrespect, namely that somehow human beings in the early stages of their existence can be treated as things, just so-much-tissue, rather than persons.”

The activist said she hopes the children whose bodies were discovered can be buried now.

“We need to cultivate a real social consciousness about how we are in union with these persons,” said Miller. “The funeral home should have buried these babies, petitioned for a waiver of the rule regarding burial certificates, or at least gone public that the babies were essentially abandoned to raise awareness about their plight.”

“In response to evidence found during the course of LARA’s investigation into Perry Funeral Home in Detroit, inspectors with the department’s Corporations, Securities & Commercial Licensing Bureau found Knollwood’s conduct demonstrated a lack of integrity to protect the public and a lack of good moral character,” said LARA spokesman Jason Moon.

In some cases, Knollwood didn’t have proper authorization to possess the babies’ bodies, raising questions about how they acquired them in the first place.

“In some cases, Knollwood obtained possession of deceased infants without first being expressly directed or authorized to do so by a relative of the deceased persons or a person entitled to custody,” said Moon. “By storing the un-cremated remains on behalf of Perry Funeral Home, Knollwood aided and abetted Perry Funeral Home, a person not licensed, in the practice of funeral directing.”

“In other cases, Knollwood, after agreeing to provide for the final disposition of a dead human body, failed or refused to properly dispose of the infants for more than 180 days after the date it took possession of the infants in violation of the Michigan Penal Code, which is also a violation of the Occupational Code, the Cemetery Regulation Act, and the Prepaid Funeral and Cemetery Sales Act,” continued Moon.

“As a seasoned law enforcement professional,” declared Detroit Police Chief James Craig at a news conference, “I’ve not seen anything or had to deal with anything like this in my entire career.”

“To conduct an investigation of this sort is a daunting task,” said Craig. “I want to applaud the work of our investigators for their work,” who discovered the nearly 450 fetal remains at the two cemeteries.

While about 90 percent of the fetal remains discovered through the cemetery raids were deemed to be in compliance with Michigan State and local law, about 10 percent were not.

Although a crypt is most commonly viewed as a final resting place for the deceased, paperwork for some of the babies indicated that they were simply being stored there, “which is a problem” for the funeral home under investigation.

And because the paperwork is somehow incomplete, it’s not clear if the crypt location represented an “appropriate disposition of remains,” said Chief Craig.

While the improper disposition of human remains is a violation of the criminal code and is a focus of the police investigation, Craig said that it is up to the Attorney General’s office to decide to pursue criminal charges against the parties involved.