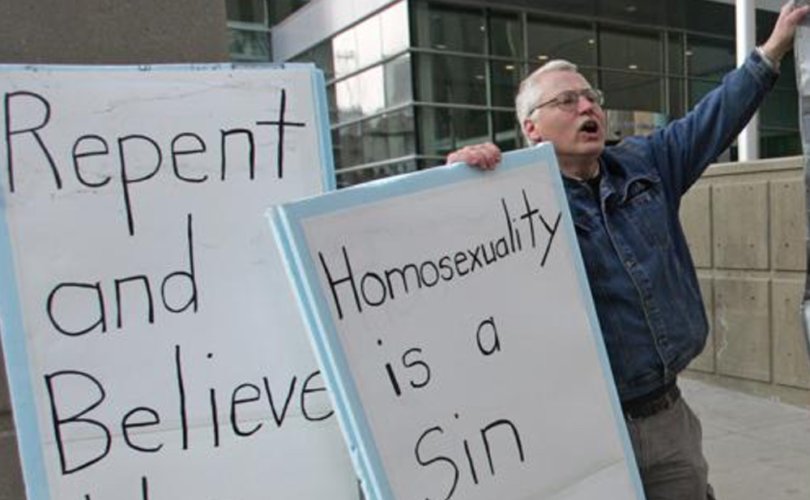 TORONTO, June 20, 2018 (LifeSiteNews) – Toronto police have issued a Canada-wide warrant on charges of inciting hatred for a Christian who handed out flyers at the 2016 Toronto Pride Parade warning of the spiritual and biological dangers of sodomy.

Bill Whatcott announced on the Free North America portal he intends to turn himself in to the Calgary police on Friday, June 22 at 10:00 a.m.

Toronto 51 Division is charging Whatcott with the indictable offence of inciting hatred under Section 391 of Canada’s Criminal Code.

“The ‘crime’? My ministry bringing the Gospel and the truth about homosexuality to Toronto’s homosexual pride parade in 2016,” Whatcott wrote on Free North America.

Constable Caroline de Kloet, media relations officer for Toronto Police Service, said the charges arose from a two-year investigation into a complaint the police received in 2016, but that police don’t give out “victim information.”

The Toronto police were in contact the federal attorney general on the case, as is the procedure with hate crimes, she told LifeSiteNews. “It’s not something we lay on a regular basis.”

Whatcott registered in the 2016 Pride parade under the pseudonym Robert Clinton on behalf of the Gay Zombies Cannabis Consumers Association.

Dressed in skin-tight green bodysuits with face masks, Whatcott and five others marched in the parade and handed out 3,000 packages on “Zombie Safe Sex” that included a flyer entitled: “We want you to practice safe sex.”

“Canada has embarked on a destructive journey toward sexual anarchy and homosexual inspired oppression,” the pamphlet declared.

“The clear evidence contained in this package shows Canada’s new sexual ethic is contrary to natural law and no good will come of it.”

A month after 2016 Toronto Pride Parade, activist lawyer Douglas Elliott launched a $104 million class action suit against Whatcott and the five unnamed “zombies,” and anyone who aided and abetted them.

Hudspeth said the lawsuit would “smoke out” all those who helped Whatcott, and Smitherman said he was “pleased” to “do all we can to stamp this hateful individual out.”

The lawsuit claimed Whatcott’s actions defamed and caused pain to the some 9,000 recipients of the leaflets, 500,000 estimated watchers of the parade, and a subclass of individuals publicly identified as Liberals.

Elliott alleged the 2016 leaflet was similar to four pamphlets critical of homosexuality Whatcott handed out in Saskatchewan in 2000 and 2001. The Supreme Court ruled in 2013 that two of these were hate literature.

Whatcott’s lawyer, Charles Lugosi, argued the lawsuit was an attack on Charter freedoms of speech, thought, expression, religion, and association.

Justice Paul Perell ruled in March 2017 that Elliott could not claim defamation of an entire group, such as the Pride Parade participants or the “LGTBTQ2SI Community,” but only of individuals.

But he also issued an order that Whatcott disclose the names his fellow half “gay zombies” as well as those of “unidentified financial backers” who funded the group’s expenses.

The judge ruled knowing these identities was necessary for the homosexual advocates if they decide to go ahead with further legal action.

Lugosi told LifeSiteNews both parties are appealing Perell’s ruling. The disclosure order against Whatcott will not be enforced during that process.

Whatcott “has been a leading figure in the dissemination of homophobic hate propaganda in Canada for years,” CAN’s chair Bernie Farber said in a Monday press release.

But Canadians should be alarmed at the state’s prosecution of Whatcott for “distributing gospel pamphlets,” says Calgary-based Pastor Art Pawlowski, founder of Street Church, and a friend of Whatcott.

“We’re turning Canada into a Nazi state, into a communist state, where if you voice your politically incorrect views, you will be attacked by the forces of the government,” Pawlowski told LifeSiteNews.

After his arrest, Toronto Police will fly out to take Whatcott to Toronto to answer to the charges in court, and for a bail hearing, Constable De Kloet told LifeSiteNews.

“It’s our responsibility because it’s our warrant to go and pick them up,” she said. “It’s a lot of work, it involves a flight usually…you maybe need a hotel, you’ve got to fly with your gun. It’s very expensive.”

“This one’s kind of a shock,” he told LifeSiteNews. “I used to be a real criminal…I know if you knock off a liquor store with a knife, it’s highly unlikely they’d put out a Canada-wide, they’d probably put out a province-wide… they won’t spend the money to go after you.”

Whatcott, who raises money online for his legal battles, hopes he’ll get bail that allows him to return to Alberta, where he has a two-month-old job, and a wife and two children to support.

“One way I look at it is, for them to go this insane, that was obviously a really good flyer,” said Whatcott.

“I don’t think it’s going to go well,” he added. “But for me, it really is about following Christ.”