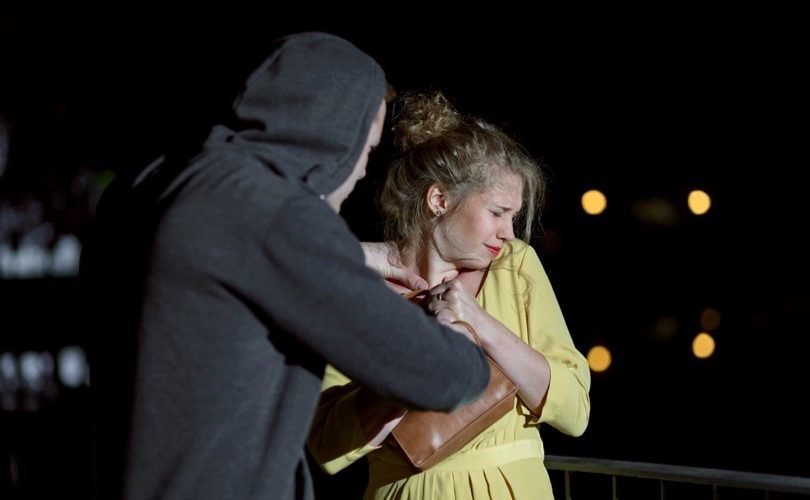 TORONTO, March 1, 2016 (LifeSiteNews) — An outspoken pro-life university student was assaulted last week as she walked home from campus by a hooded man wearing dark clothes who pushed her against a fence and derided her for her pro-life beliefs.

“Would you still be anti-choice if you had to make the choice?” the woman, who wishes to remain anonymous, remembers the man shouting before she kicked him and ran.

Shaken but unharmed, the woman immediately reported the incident to campus and local authorities, giving a general description of her assailant. No one has yet been apprehended.

Anastasia Pearse, Executive Director of National Campus Life Network, told LifeSiteNews that the attack “seems to be a direct result” of the woman’s pro-life outreach based on what the assailant said, as well as his aggressive actions towards her.

“We truly were shocked. Nothing to this extent has ever happened with the students that we’ve worked with,” she said. “We are disgusted and appalled by the contemptible behaviour of this man.”

Pearse said that prior to the attack the student had been involved in some high profile pro-life events on the campus that had garnered media attention and made her into a recognizable public figure.

“It’s horrible that students would have to face this in order to share their pro-life message on campus. But, it goes to show that students are being effective as well because, obviously, something that this student said on campus triggered something in this individual,” she said.

The student has said that the attack has not made her waiver in her commitment of bringing justice to preborn babies targeted for abortion.

“This is the work I’ve been called to do. I’m not going to let some politically-charged moron scare me off,” the student told National Campus Life Network, related Pearse.

Pearse said she is impressed with the student’s courage and perseverance in continuing to share the pro-life message on campus.

“We know that our pro-life message won’t always be received in a very welcome manner on campuses, but we know that we have to continue to share the truth regardless,” she said.