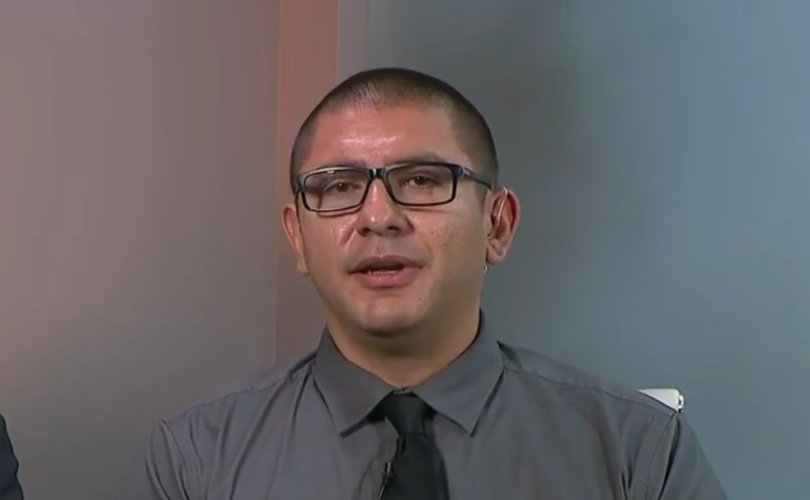 DENVER (LifeSiteNews) — A 34-year-old policeman and father of four in Denver has suffered a debilitating reaction after a city-wide order forced him to either take a COVID shot or lose his job.

Jose Manriquez has been a police officer in Denver for seven years, previously serving in the army for 12 years, but is now unable to work due to a sudden loss of the ability to walk after taking one shot of the experimental mRNA COVID jab manufactured by Pfizer.

On August 2, Denver’s Democrat Mayor Michael B. Hancock announced the implementation of a “vaccine” mandate against COVID-19 for all municipal employees, the deadline for which was set for September 30.

The edict affects more than 10,000 city workers, including police officers and other emergency service workers. Hancock announced that all those to whom the ruling applies must have had their final dose of a COVID jab by September 15, such that the two-week post vaccination period required to be considered “fully vaccinated” has been met before the September 30 deadline.

According to the mayor’s statement, “those who are unvaccinated remain at great risk [of contracting the virus] and they pose an ongoing threat to the city’s ability to move past the pandemic,” though no evidence was provided to support the claim.

“To achieve the highest level of protection and recovery … we need to maximize vaccinations as quickly as possible, and mandates will do just that,” Hancock wrote.

The public health order, signed September 1 by Robert McDonald, Executive Director of the Denver Department of Public Health and Environment, noted that exemptions will be offered by city employers “for any personnel who have medical or religious exemptions from the COVID-19 vaccination.”

In a FOX News interview Friday, Manriquez explained that in order to keep his position with the Denver Police Force and support his four children he took his first dose of the Pfizer-developed COVID shot on August 22.

“That week I started developing a body ache, pain in my legs,” the officer explained to host Ainsley Earhardt. “The next week, August 31, I tried going to work, my legs hurt a lot more.”

Manriquez said that his condition deteriorated while working, to the extent that he was sent home. “On my way home I couldn’t feel my feet anymore, couldn’t feel the gas pedal or the brake pedal and pretty much had to call for help to get home. I barely made it.”

“That was only the first shot.”

The army veteran added that his doctor confirmed the most likely cause of his sudden loss of leg function was the jab. “It hasn’t been diagnosed all the way, but he said it is the vaccine.”

According to the Vaccine Adverse Event Reporting System (VAERS), co-run by the Food and Drug Administration (FDA) and the Centers for Disease Control and Prevention (CDC), the Pfizer COVID shot has been correlated with some 394,765 adverse events, ranging from blood clots and heart inflammation to miscarriages and infertility. Overall, Pfizer’s VAERS records account for 52 percent of all adverse event reports involving a COVID jab.

Furthermore, the Pfizer shot has been reportedly taken in the days and weeks preceding 10,852 deaths, around 68 percent of the 15,937 deaths reported on the system following the COVID shots.

A fundraising campaign for Manriquez, established by his sister to help him and his family as they face an uncertain future, explains that the officer is “the sole provider for his family of six.”

“After receiving his vaccine my brother has developed severe tremors, he has trouble sleeping due to the amount of pain in his legs, he can’t walk without the worry of falling due to his legs giving out, and has actually fallen a number of times,” the campaign message reads.

Manriquez’s sister assured that all funds will go toward medical bills for the injured officer, as well as legal fees “in the event that he is wrongfully terminated due to his current health issues.”

Manriquez appeared alongside his attorney, Randy Corporon, who is also representing eight other Denver police officers who have either been injured by their first shot or are refusing to take the jab at all.

Corporon placed blame on doctors who “don’t have the courage” to speak out about the effects of the shots, lamenting that “the effects started hitting him [Manriquez] right after he took the shot.” He added that Manriquez “is a guy who had serious COVID last year and beat it, so his body was raging with antibodies, and they gave him this jab and now his hand is shaking … it’s outrageous.”

As a result of the mayor’s order, “we’ve got officers who have had to retire early,” the lawyer added, as well as Manriquez, who is “just at the beginning of his career, who had trouble getting up here to his chair.” Corporon noted that all nine of his clients are “Denver police officers who’ve had this [jab] forced on them.”

Speaking to Earhardt about his future, Manriquez expressed that his recovery appears to be “uncertain.” Visibly choking up, the officer said, “I can’t be outside with my kids [and] we got soccer season.”

“It’s life changing, and the doctor said it could get worse before it gets better,” he continued, “and if I do get better, it’s going to be years.” The officer struggled to hold back tears as he described a tradition of carrying his children to bed every night before he got the jab, but now, owing to his crippling condition, they say to him “daddy, we’ll just walk to bed.”

Corporon confirmed being on the phone with Manriquez on the night before his court hearing, at which point “he had fallen over putting his kids to bed.”

“His little girls think daddy is broken,” the attorney said.

A recent attempt to have the order overturned in court was thrown out September 29, the day before the mandate went into force. Seven police officers unsuccessfully attempted to block the strict “vaccine” requirement as, according to Judge Shelley Gilman, the officers did not follow the correct procedure in suing the city, therefore she dismissed the case.

A second lawsuit is currently underway against the city’s COVID jab ruling, this time from seven construction trade associations within the state. The unions wish to see the “vaccine” requirement for private contractors which work with the Denver government be scrapped.