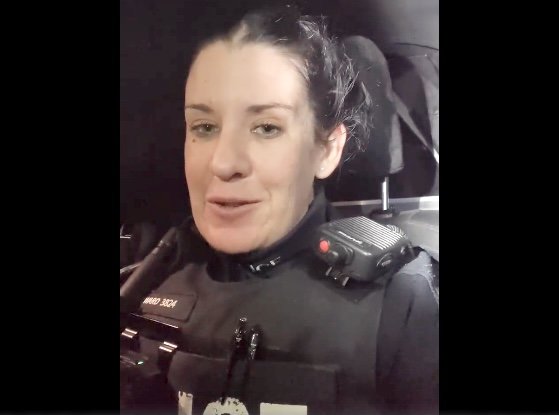 DURHAM, Ontario (LifeSiteNews) – A Canadian police officer from Ontario is under investigation after voicing her full support for truckers taking part in the “Freedom Convoy 2022” who are headed to Ottawa in protest of COVID mandates and virus restrictions.

“I really wanted to give a shout out to all the truckers. I think what you guys are doing is incredible,  you’re fighting for our rights and freedoms,” said Durham Police Constable Erin Howard in a video posted to her Twitter account on Monday.

“And right now, it feels like we’re a little bit at war and those rights and freedoms are at stake. So you guys are honestly true heroes. What you’re doing is just incredible.”

Shortly after her now-viral video was posted, Durham Regional Police Service (DRPS), despite the force not having a mandatory jab policy in effect, said they would be investigating Howard.

“We were made aware today of a video circulating on social media from one of our uniformed members regarding the Freedom Rally. The views expressed in that video do not reflect the views and opinions of DRPS. We are currently looking into this matter,” tweeted the DRPS.

Howard noted that she will be in Ottawa herself to see the freedom convoy “roll in,” which is expected to happen this coming weekend, and will be speaking on behalf of the group Police on Guard for Thee.

“I can’t wait to meet you guys. Hope to talk to a lot of you in person. Anyway, just wanted to give you guys a shout out and some support and keep rolling and we’ll see you in Ottawa,” said Howard.

The group Police on Guard for Thee is made up both active-duty and retired police officers who stand against “unconstitutional public health orders.” They have many members across Canada.

Thousands of Canadian truckers from the “Freedom Convoy 2022” began their “slow roll” to Ottawa this past weekend to protest draconian COVID jab mandates and rules imposed by Canadian Prime Minister Justin Trudeau and Canadian provincial premiers.

The group has raised more than $4.6 million. However, reports have surfaced that GoFundMe has temporarily frozen access to the funds.

Today, the group confirmed with LifeSiteNews that while GoFundMe has temporarily prevented them from distributing funds, the page is still taking donations and has not been shut down.