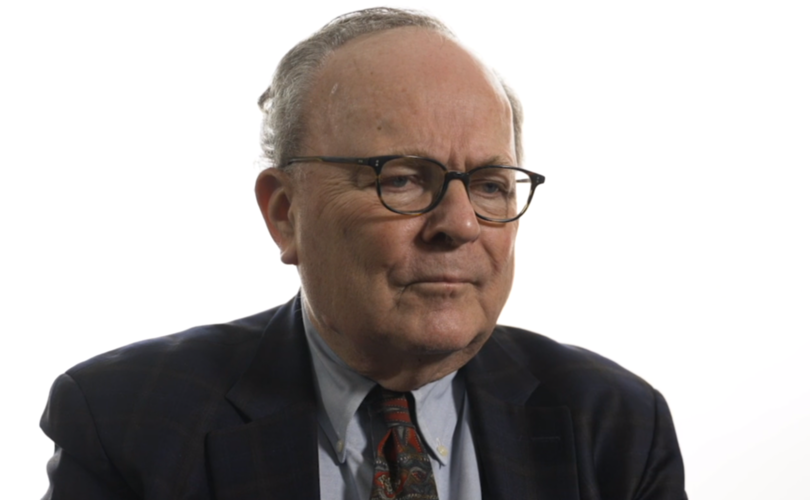 (LifeSiteNews) — The home of pro-life hero attorney Thomas Brejcha was vandalized by a radical pro-abortion mob the night of July 1 as police officers stood by in squad cars and on bicycles observing and making no arrests.

According to a Saturday email release from the Thomas More Society (TMS), Brejcha, who founded the organization and serves as its president and chief counsel, was targeted in advance of the attack by a terrorist group calling itself the “Reproductive Justice Union” (RJU).

Hiding behind an anonymous Twitter account which was established in early June, the pro-abortion vandals recruited accomplices, tweeting on June 25, “Don’t you want to scream at the people who did this to you? Friday, July 1st, we’re going to meet in Evanston and march to a member of the Thomas More Society’s house to make them look us in the eyes, to see our anger and rage.”

An accompanying tweet revealed a malevolence of anti-Christian bigotry displaying a cross strewn with streams of blood including a caption stating “we’re committed to fighting fascism, [and] Christian nationalism.”

Confront the defenders of the far-right! pic.twitter.com/2f3FFxo0vH

The Thomas More Society’s email description explained that “between 40 and 50” individuals of the “radical anarchist pro-abortion group … massed in front of the Brejchas’ residence chanting obscenities about Tom, the pro-life movement, the police, and the Supreme Court.”

“Suddenly they dropped loud smoke bombs, surged onto the lawn, and hurled paint bombs at the brick front of the house, porch, and door, staining the property with almost indelible green paint, and inking the sidewalk and driveway with their ‘F’ words, anarchist symbols (circled capital ‘A’), and ugly slogans like ‘No Gods, No Rulers,’ and ‘Abort the Supreme Court,’” the release described.

Fortunately, Brejcha and his wife Debbie were not home, yet “even though the police were sitting right outside watching everything, no arrests were made, and no one has been held accountable.”

Furthermore, RJU distributed a doxing flyer in the neighborhood titled “YOUR NEIGHBOR HELPED OVERTURN ROE,” which identified the Illinois attorney with being “Anti-Abortion, Anti-Gay, Anti-Vax, Pro-Trump, [and] Pro-voter suppression.”

The TMS statement described the flyer as urging neighbors to “join their sick intimidation parade.”

According to the release, the vandals also “tore up an American flag, shouting ‘Death to America’” and did damage to the Brejchas’ garden.

“[T]his is just more proof that the radical abortion partisans will stop at absolutely nothing to promote their wicked ways, even directly targeting the homes of innocent pro-life advocates like Tom and Debbie Brejcha,” the email read.

“Now that Roe v. Wade has been overturned, they’re lashing out harder than ever like a wounded beast, attacking anyone who stands for life.”

Pro-abortion activist violence has skyrocketed since the U.S. Supreme Court draft decision that would overturn the landmark abortion case, Roe v. Wade, was leaked on May 2. Despite enormous pressure from similar pro-abortion terrorist groups, the majority of the court remained steadfast and officially issued the historic Dobbs v. Jackson Women’s Health Organization ruling on June 24.

A list compiled by the pro-life Family Research Council shows that, as of July 11, at least 103 pro-abortion attacks have taken place since the leak, including 32 acts of vandalism against churches and 51 against pro-life organizations.

Though the Federal Bureau of Investigations (FBI) claims to be investigating such attacks, over the last two years many have observed the emergence of a “two-track justice system” where leftist terrorists who burned cities in the summer of 2020 enjoy great leniency, if they are arrested at all, and January 6 trespassers on the Capitol grounds are hunted down with SWAT teams and punished with significant time in prison, even prior to any trial.

Despite the many recent domestic terrorist acts against Christians, churches, and pro-life institutions across the country, including these at the Brejcha residence in the presence of police officers, LifeSiteNews is still unaware of any indictments.