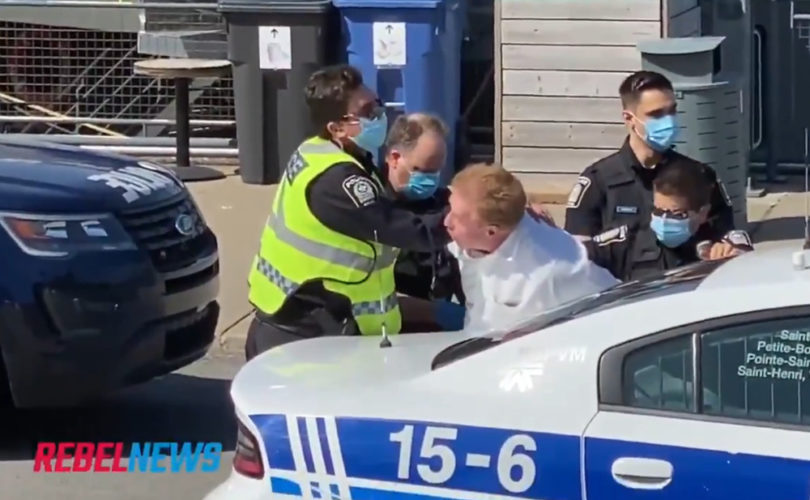 Arrests made at Rebel News raid in MontrealEzra Levant / Twitter

“Montreal police have raided the Airbnb where Rebel News reporters have been staying to report on the curfew and the lockdown in Quebec,” stated Rebel News in a report published Saturday.

According to Rebel News, two of their reporters, Keean Bexte and David Menzies, were arrested because of a conflict that took place with police near the news team’s Airbnb houseboat.

The Rebel News team was onsite in Montreal to cover ongoing COVID lockdown protests, as well as to report on how the local police force has been enforcing a curfew which has been in place for months.

Ezra Levant, the founder of Rebel News, was present at the confrontation on Saturday. He said that dozens of police showed up at the team’s Airbnb HQ.

“Montreal police have raided our Airbnb and are arresting and handcuffing our journalists. As I told the cops, we will be getting to know each other very well as we sue them,” tweeted Levant on Saturday.

Bexte and Menzies were eventually released.

CTV News reported that police claimed those on the boat were not following COVID protocols regarding masking and social distancing.

Levant fired back at CTV news, saying in a tweet, “Never trust CTV. It was not a social gathering. It’s a hotel — an Airbnb. We were 17 people; it was rated for 21 people. And indeed @spvm have arrested @TheMenzoid and still hold him. Imagine how inaccurate the rest of CTV’s shoddy coverage is.”

According to Levant, police did not have a search warrant for the initial raid, and as a result, eventually had to leave because no judge would “bite” to sign any warrant. Nevertheless, police taped off the area and called it a “crime scene,” according to Levant.

“I’m told the Montreal police shopped around their laughable search warrant application to several judges but none would bite. Maybe they noticed the @spvm’s public relations devastation and didn’t want to be a part of it,” tweeted Levant.

Multiple videos show Rebel News reporter Menzies being placed in handcuffs and placed into the back of a police car, after a scuffle with police.

According to Levant, one of his “friends” was trying to protect him and Menzies from the police.

“My friend @Yanky_Pollak was trying to protect David Menzies and me from the thuggish Montreal police,” tweeted Levant.

Rebel News reporters have been covering ongoing anti-lockdown protests in Montreal and other parts of Quebec and have been issued tickets before.

Levant, who is Jewish, said that Montreal police in the past have been caught on video directing racial slurs at him and other reporters.

According to Rebel News reporter Sheila Gunn Reid, who was not in Montreal Saturday, her colleagues are in “Montreal because it’s devolving into an authoritarian city-state & it’s newsworthy.”

“The police are lawless. People are rioting in response. And when our team is assaulted because the mayor’s office labeled them this way, you’re going to answer for it. Trust me,” tweeted Reid.

In a subsequent tweet, Reid wrote the Montreal police “harasses our Jewish reporters, violently assault protesters, storm synagogues, and seized our AirBNB to prevent us from reporting on their misdeeds. A riot broke out in the streets last night. And the mayor’s office is blaming us. Sickening.”

Over the weekend, riots broke out in Montreal in protest against ongoing COVID curfews which on Sunday were bumped up to 8:00 p.m. for the city.

Guillaume Cloutier, who serves as an assistant to the Mayor of Montreal Valérie Plante, blamed Rebel News for starting the weekend riots.