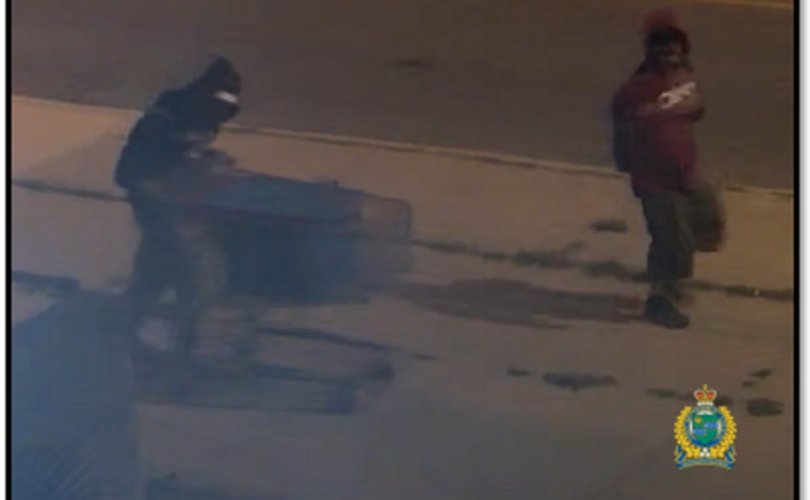 ST. CATHARINES, Ontario, September 10, 2020 (LifeSiteNews) — Local police are seeking help from the public to identify two men suspected of stealing a tabernacle from a Canadian cathedral.

Niagara Regional Police issued a press release September 10 with descriptions of the suspects, as well as surveillance camera images of the pair standing inside St. Catherine of Alexandria Cathedral and of them pushing a shopping cart carrying the stolen tabernacle.

The 176-year-old cathedral of the Diocese of St. Catharines in southwest Ontario was broken into at 4:30 A.M. September 8, and the tabernacle pried off the main altar and carried away.

After hearing of the devastating event, a group of cathedral parishioners organized a search.

They found the tabernacle Wednesday morning “partially submerged” in the Old Welland Canal, according to a statement by diocesan vice chancellor Margaret Jong. The Blessed Sacrament was not found.

According to Catholic doctrine, the consecrated Hosts, also referred to as the Blessed Sacrament and the Eucharist, are the literal Body and Blood, Soul and Divinity of Jesus Christ.

Deliberate desecration of the consecrated Host is the gravest of sins.

“[O]ur hopeful presumption is that the consecrated Hosts dissolved naturally in the water where the tabernacle was found,” Jong said.

During a radio interview Tuesday, Bishop Gerald Bergie of St. Catharines pleaded with the thieves not to violate the consecrated Hosts, but to return them intact, Catholic News Agency reported.

“The tabernacle can be replaced. It’s the contents … that is what is so precious to us. That’s what’s irreplaceable,” Bergie told NewsTalk 610 CKTB.

He said there would be “no questions asked” if the thieves returned the Blessed Sacrament unharmed.

Cathedral rector Fr. Donald Lizzotti said he was “shocked” by the incident and described to LifeSiteNews the lengths to which the thieves went to steal the sacred container.

“The tabernacle itself was mounted to wooden platform pieces that were screwed to the altar top itself,” he said. Moreover, it had a covering of steel “which looked like another tabernacle with brass doors” over it. The thieves removed this before they pried the tabernacle, which Lizzotti said is made of lead, from its platform.

The recovered tabernacle is “badly damaged,” he said.

The doors were taken off, and the ciborium — which holds the consecrated Hosts — is missing, though the lid was found, he said.

One of the tabernacle doors has also been found, and “our hope is that the second door may yet be recovered,” Jong said.

A man on the street gave the one door to a parishioner and said he had been given it by another individual in Centennial Park.

The cathedral’s “most vulnerable” doors are now barricaded with crossbars, and the parish will be “putting in a surveillance system, and alarm system,” he told LifeSiteNews.

Bishop Bergie told the radio station that because it was so dark, the surveillance camera footage is “grainy,” and it might be hard to identify the culprits.

He said the thieves may have thought the tabernacle’s bronze doors were gold, or they could have had a more heinous motive, CNA reported.

“Who knows what goes through the minds of these people?” he said.

Catholic author Phil Lawler, when writing some years back about a willful and announced act of desecration of the Host, observed: “A generation or two ago, even the most hardened anti-Catholic bigot would have shied away from such a frontal assault on the Holy of Holies. But we live at a time when hatred for the Church is intense, and the Enemy is not afraid to show his face.”

He quoted Jesuit Fr. Donald Keefe’s words to that perpetrator: “Your conduct with respect to the Eucharist is execrable, but that you would spend so much time and energy on that desecration, and yet more upon publicizing your iniquity, is indisputable evidence that you take the Eucharist very, very seriously.

“So you should: it is the central reality of the universe; more; it represents our only ground for joy. There has been a long line of people like yourself unable to bear its existence and intent upon its abolition, but that is a cause lost from the beginning.”