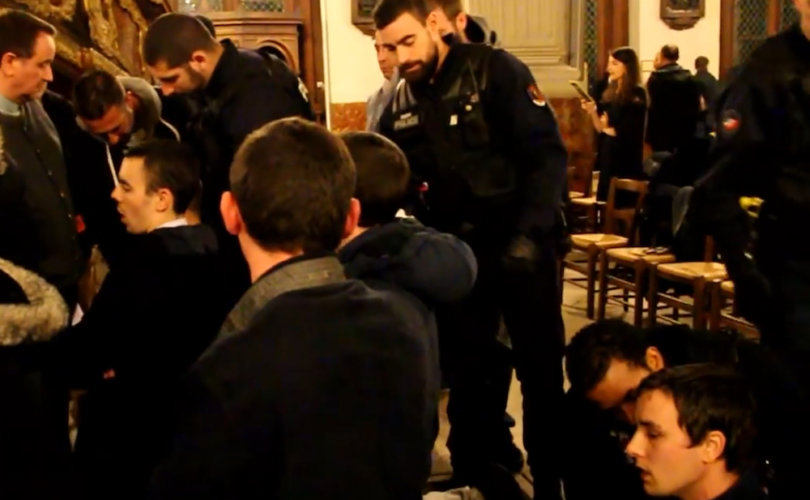 LYON, France, December 7, 2017 (LifeSiteNews) — For the fourth time in recent months, a group of youth singing the rosary interrupted an ecumenical service at a Catholic church.

A video capturing a brief portion of the incident shows the young men kneeling and singing as armed policemen assemble to remove them from the church.

The ecumenical service was the conclusion of commemorations of the 500th anniversary of the Protestant Reformation, La Croix reported.

The Catholic Youth Movement of France and France Jeunesse Civitas conducted the disruption to “publicly repair this offense to God and his Church.”

“Catholic activists could not let this scandal go unpunished,” a translated post on the Civitas website said. “So we gathered in this church to denounce this sacrilegious meeting and pray to the rosary saint.”

“What a sad fact,” they said, “the religious authorities have abandoned almost all Catholic doctrine and let error invade our sacred places.”

The group’s post said all of the ecumenical participants had left before the rosary concluded, attributing this to the strength of the prayer. The report said some members of the group distributed an explanatory flyer while most sang the rosary on their knees, enduring “insults and mockery.”

“In 2017, when French Catholics pray in a church,” they said, “the police are sent on the spot to expel them with HKG36 machine guns.”

The La Croix article called the young people “nationalist and traditionalist Catholic youths” and reported that they had “shaved heads and black clothes” and “were shouting ‘Hail Mary’ loudly and repeatedly.”

According to La Croix, a representative from the Archdiocese of Lyon is considering reporting the incident to the French Bishops' Conference for advice on how to respond in the future.

It was the fourth such incident in France and elsewhere in Europe in the last three months, Church Militant reported.

In October in Brussels, Belgium, a dozen Catholics also prayed the rosary to interrupt a Protestant service at the Cathedral of St. Michael and St. Gudula. That service was a commemoration of the 500th anniversary of the Protestant Reformation as well. Police removed the rosary protesters, most of them young people, after they delayed a Protestant minister’s sermon for 40 minutes.

Video of the Paris incident shows hecklers harassing the prayer protesters, including making physical contact with them as they were kneeling and praying.

A fourth protest involved a Catholic church hosting a Muslim religious leader in November in the Archdiocese of Bordeaux. Catholics prayed the rosary to interrupt an interfaith gathering that included a speech from Imam Hassan Belmajou. According to Church Militant, the Imam has alleged ties to the Muslim Brotherhood.