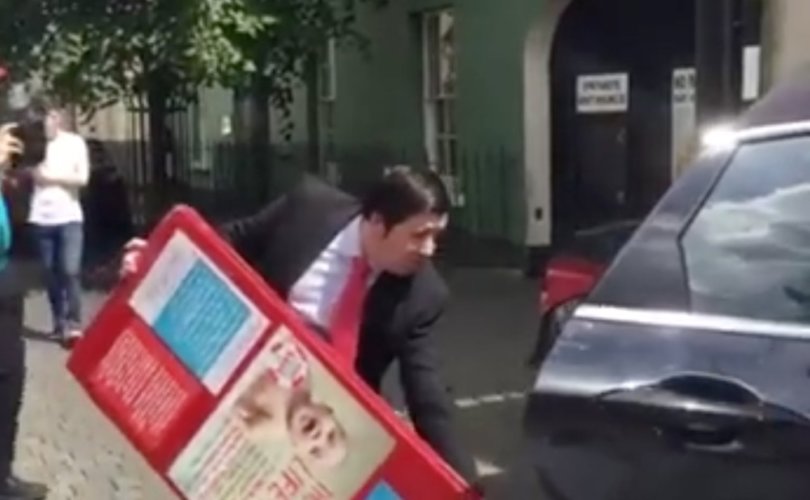 A Garda (police) detective removes one of the pro-life billboards. Youth Defense / Facebook

KILKENNY, Ireland, July 27, 2017 (LifeSiteNews) — Police disrupted a legal pro-life demonstration in Ireland on the weekend. They confiscated pro-life billboards on public display and threatened to arrest pro-life activists at the event.

Ireland’s Youth Defense had organized a series of peaceful pro-life demonstrations across the country to help save the 8th amendment to Ireland’s Constitution. The 8th amendment protects the right to life of both the mother and preborn child. A referendum on the amendment is expected in nine months.

The Save the 8th pro-life Roadshow was visiting Kilkenny on the last day of its extended tour when Police decided to seize the group’s material. The group had already been to 17 towns and cities throughout Ireland without incident.

But just 10 minutes into the information event, Garda (police) detectives arrived on the scene. They told the pro-life activists to cover the large photographs of babies who had been aborted or face arrest.

“We had just set up our Life Boards, which are 8-sided wooden boards, and are used to display pro-life information, such as the development of the preborn baby, medical facts, support helplines for women with crisis pregnancy and photographs showing the reality of abortion. These displays are part of our educational outreach ahead of the referendum on the 8th,” said Clare Molloy of Youth Defence.

“The Gardai demanded that the photographs be covered up despite our letters from Garda (Police) Superintendent confirming that the Director of Public Prosecutions had previously found the display to be legal,” she said.

“The, to everyone’s shock, they seized both wooden boards, and carried them to a nearby car and drove away,” she added.

A video of the raid shows police walking away with the billboards and stowing them in their cars.

Pro-life groups across Ireland see the seizure of legal pro-life material in the public square as an outright attack on their freedom of speech.

“This has very serious implications for a free and fair debate ahead of the referendum on abortion expected in Spring,” said Molloy.

“Pro-abortion protesters were also in Kilkenny but their materials were not interfered with. We had a lot of support from people in Kilkenny that day, with hundreds signing our pro-life petition and more signing up to the Save the 8th campaign,” she added.

Youth Defence said they will pursue the matter with Kilkenny Gardai and will fight to have their pro-life boards returned.

“We are looking at a serious infringement of constitutional rights ahead of a referendum. This is a major public concern,” said Molloy.

Molloy said the group’s planned Save the 8th activities will continue for the rest of the summer, including a national door-to-door campaign and street outreaches.

The pro-life group says its activism is making a difference. A major rally for life attracted up to 80,000 people on July 1st. Youth Defence activists say they have noticed a significant uptake in engagements with members of the public on their Save the 8th Roadshow.

“People now realize there is a vote coming on this issue and this means more of them are open to talking about the issues. They’re interested in looking for information and in considering the consequences of repealing the 8th amendment and the right to life of preborn children,” said Molloy.