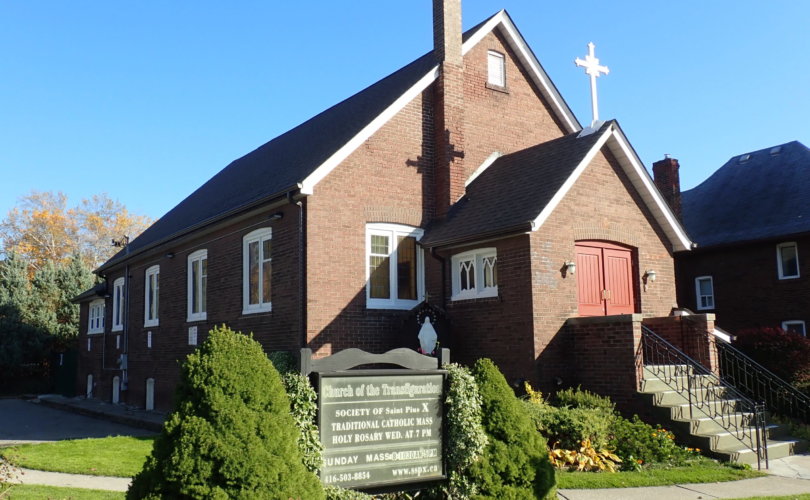 TORONTO, March 30, 2020 (LifeSiteNews) — Toronto police showed up directly after Mass last week to warn a priest that he could be fined for violating a provincial order restricting public gatherings because of the coronavirus.

But Fr. Dominique Boulet of the Society of St. Pius X says his parish complied with Premier Doug Ford’s March 17 directive — which allowed gatherings of up to 50 people — when they held a public Mass on March 25, the Feast of the Annunciation.

When Ford declared a state of emergency on St. Patrick’s Day, the Ontario Catholic bishops, including Cardinal Thomas Collins of Toronto, cancelled all public Masses.

However, the SSPX, a union of more than 600 traditional Catholic priests who believe the Second Vatican Council is the cause of the crisis in the Church, claims that “supplied jurisdiction” allows its priests to operate outside the authority of diocesan bishops.

While theologians still consider SSPX to have an “irregular” canonical status, Catholics can fulfill their Sunday obligation at a Society chapel, and validly and licitly get married and confess their sins to an SSPX priest.

“Things have been very intense over the past days,” Boulet told LifeSiteNews in an email statement.

“Word of mouth spread quickly within the Catholic community in Toronto that we were still having Mass in our church, and we received hundreds of calls from faithful that we didn’t know, but who were eager to come to the Traditional Latin Mass and to receive the sacraments,” he said.

“We organized ourselves to comply with the rule of 50 persons max and the social distancing requirement. Faithful had to register for Mass and we set up clear marking on the pews to keep social distancing while attending Mass,” Boulet explained.

Moreover, “a number of souls approached our priests to get reconciled with God by making a good confession, and this was a real blessing in the midst of the present-day calamity,” he added.

However, on March 24, Ford ordered the mandatory shut-down of all non-essential businesses.

While houses of worship were not included on the government’s list of essential services, neither did the province explicitly order them shut down — although a local health authority in Ottawa closed the churches, mosques and synagogues in his jurisdiction.

Nevertheless, on March 24, a number of Ontario dioceses ordered a blanket lockdown of all churches and chapels.

And when parishioners congregated at Transfiguration Parish on March 25, a neighbour called the Toronto Police Service.

An officer appeared after Mass with a City of Toronto-issued warning that the province had banned gatherings of over 50 people.

Boulet said the officer was “nice and polite” and said he was “just doing his job” but that he did not take any steps to verify the parish was in compliance.

A City of Toronto spokesperson told LifeSiteNews the warning was served “with the intent to educate the parish.”

But the question remained whether or not Ford’s March 24 mandatory shutdown meant churches must close their doors.

Boulet’s parish contacted the province to ask if churches were essential services, but the man who answered the toll-free number had to refer the question to his supervisor, he told LifeSiteNews.

Two days later, a representative from the health ministry called to say “they are in the dark as much as we are,” and that the legislature would have to resolve the matter, he said.

The Ford government is allowing businesses to apply for the “essential service”  designation so they can remain open during the pandemic, he added.

Indeed, Ford stated at a March 24 press conference that the list of 74 essential services “can be adjusted either way … it’s an open list.”

Boulet’s parish has applied for such a designation, but in the meantime, his superior decided to cancel public Masses because the risk is too great, he said.

And on March 29, Ontario restricted public gatherings to no more than five people.

“Now, it looks like the celebration of the mysteries of the Passion may have to be celebrated without the assistance of the faithful,” Boulet told LifeSiteNews.

“The purple cover on the statues and crucifix will have a special meaning this year, because it will also veil the ceremonies that Catholics from all over the world may not be able to attend. But let us not forget that the Resurrection always follows the Passion.”

Contact your MPP to request that churches be designated an essential service. To find the name and address of your MPP, go to the Campaign Life website here, or the Legislative Assembly of Ontario website here.

Contact your bishop and parish priest to request that they apply to be designated as an essential service. For the address of Ontario bishops, go here.