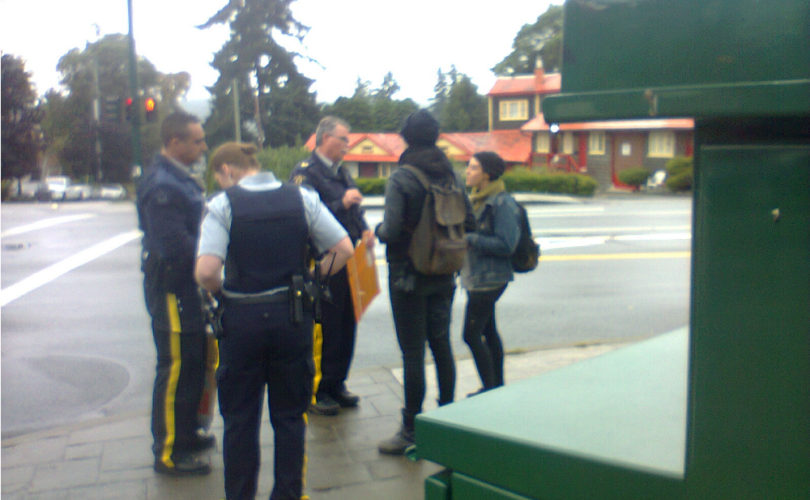 Two pro-abortion demonstrators outside a Victoria, British Columbia, abortion facility had signs with strong sexual messaging seized by RCMP Monday after they yelled obscenities at 40 Days for Life vigil keepers.

The two young women, who later declined to identify themselves to LifeSiteNews, came within arm’s length of two participants in the 40 Days for Life prayer vigil, who were standing across the intersection of Helmcken Road and the Old Island Highway from the Vancouver Island Women’s Health Clinic. The two women used their bodies and signs to present passersby from seeing the vigil keepers’ own signs.

40 Days for Life is a pro-life vigil that takes place twice a year outside more than 200 abortion facilities in Canada, the U.S., and abroad, and runs this fall from September 25 to November 2. It is sponsored in Victoria by Choose Life Victoria.

“The police told us to call them if anything happens and they showed up within 10 minutes of us calling,” Alex Berns, 40 Days for Life Victoria co-ordinator, told LifeSiteNews.

RCMP confiscated the signs after interviewing the two young women. Sergeant D. Spencer told LifeSiteNews the signs were taken because “we believe a violation of Section 175 of the Criminal took place.”

Commonly called “Mischief,” offences under 175 include “disturbing the peace” by “fighting, screaming, shouting, swearing, singing or using insulting or obscene language,” and “by impeding or molesting other persons.”

Sgt. Dexter said that no charges had been laid against the two young women and that the wording alone on the signs was not enough to justify charges.

This is not the first time pro-abortion demonstrations have led to police action at the Vancouver Island Women’s Health Clinic, where most of the Victoria area’s abortions are done. One man spent a night in jail after threatening a 67-year-old 40 Days for Life vigil keeper, then yelling religious-sexual obscenities at two others, and finally stalking a third for several hours, all on the same day.

This is also not the first time a pro-abortion protest has carried a homosexual connotation. On a vigil two years ago a dozen female and male youths formed two lines in front of vigil keepers and kissed and fondled each other in sequence as the two lines merged.

Berns commented, “They are missing the boat. We have nothing to say about gender identity issues. We are here to protect unborn children from abortion and young women—and men—from a life of pain and regret.”

That same morning, because Berns was carrying a sign saying “Men Regret Lost Fatherhood,” three men had indicated support from their cars before the pro-abortion pair showed up. “One parked and came over. He said, ‘I’m one those guys. I’ve lost two [unborn children]. It’s a good thing what you are doing.’”

The receptionist at the Vancouver Island Women’s Health Clinic would not comment.