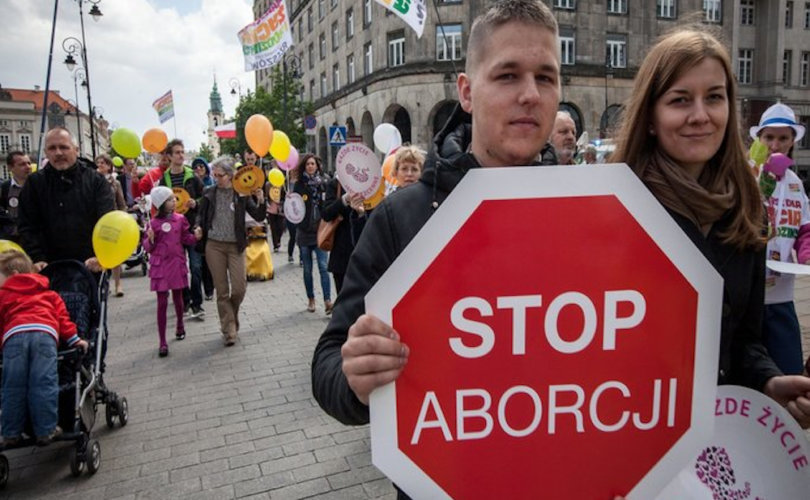 WARSAW, Poland, January 19, 2017 (LifeSiteNews) — A new bill that would ban abortions in Poland is stalled.

Poland’s ruling Law and Justice (PiS) party is still waiting for a vote to take place that politicians seem to be delaying or possibly avoiding.

The bill, presented to Parliament by the Polish Federation of Pro-Life Movements in September 2016, was supposed to come up for a vote on January 12. Pro-lifers drafted the proposal and sent it to the lower house, or Sejm. It ended up in the Sejm’s Commission on Petitions, where legislators were scheduled to discuss it. However, that never happened.

Similar to the former draft, the new bill would protect all unborn children. It would also ban the sale, free distribution, and advertising of abortifacients.

“The Commission of Petitions was cancelled and no other date was announced,” Mariusz Dzierżawski from The Right to Life Foundation (Fundacja PRO-Prawo do życia) told LifeSiteNews. His organization supports the new legislation, which does not include legal consequences for women who abort their children.

Dzierżawski’s group proposed an earlier version of an abortion ban, which left prosecuting women who had abortions to the discretion of judges. However, PiS killed that proposal in October 2016. That citizens’ legislative initiative, put forth by the “Stop Abortion” Committee, received more than 450,000 signatures of support. That measure was the work of a grassroots movement and, contrary to foreign press reports, was started neither by the Catholic Church nor by the government.

Shortly after the “Stop Abortion” Committee ban was rejected in October, Antoni Zięba from the Polish Federation of Pro-Life Movements commented, “I have to absolutely emphasize that this vote is not a catastrophe.” He explained then that his organization presented its own bill that sought a ban on abortion but did not punish women for aborting. His hope is still very much alive.

The authors of the new bill believe Parliament will still support it. Dariusz Hybel, the editor of the pro-life magazine Głos dla Życia (“Voice for Life”), the official publication of the Polish Federation of Pro-Life Movements, remarked that, “Everything depends on the political will.” He added that it would be a “good gesture from PiS, especially given earlier rejection of the abortion ban.”

Hybel describes his project as an opportunity to change Polish law. It is, he said, a goal shared at least partially by many influential PiS politicians, who “said they cannot accept aborting handicap babies.”

If the party chooses to reject the proposed law in the Sejm’s Commission on Petitions, it would send a bad signal, Hybel continued. It would mean that PiS, considered a conservative party, “does not even want to tackle this subject.” Hybel also mentioned that this legislative project was supported by 160,000 signatures in an online petition.

Aleksandra Maria Gil, also from the Federation, is pleased that the group’s proposal “wasn’t just pushed under the rug but rather will see the light of day.”

Such optimism might be misplaced, though. Pch24.pl reported that members of the Commission of Petitions oppose the abortion ban.

According to the daily Gazeta Wyborcza, the head of the Commission, Sławomir Piechota, criticized the way the proposal was introduced through a petition rather than regular legislative channels.

Some pro-life activists were shocked by this statement.

“This was a normal, transparent, legal path for a bill to follow,” said Kaja Godek of the Life and Family Foundation. “This is a commission which by definition should be close to the people and responsive to their needs. If the Commission of Petitions shows such a big disrespect for this petition, maybe it should be dissolved. This would save money. Why should taxpayers fund a Commission which openly declares that it won’t do the very thing it was created for?”

Piechota is a member of the opposition Civic Platform party. Even more worrisome for pro-lifers, Andrzej Smirnow, the vice chairman of the Commission and PiS member, left little hope. “We will vote to reject this project,” he was bluntly quoted in the left-wing Gazeta Wyborcza. “We are not here to deal with such difficult things.”

The failure of the Sejm to stall the abortion ban means that the 1993 law is still valid. Even though abortions are technically illegal, they are allowed in three circumstances.

The first is when a doctor suspects that the baby has a severe and irreversible handicap or an incurable and life-threatening disease. In such situations, the procedure is allowed until the baby is viable, which means late-term abortions for a 6-month-old unborn baby.

The second is when the woman’s life or health is endangered, there are no legal limits as to the time when it can be performed. Finally, when the pregnancy is a result of a criminal act, abortion is permitted until the 12th week.

1
Canadian doctor sounds alarm over 13 ‘sudden’ deaths among physicians since COVID jab rollout
2
The jabbed aren’t just unprotected against COVID, they’re also suffering the most
3
Cdl. Burke warns of ‘advancing apostasy’ in the Church during Latin Mass homily
4
After raid heard ’round the world, the choice is between Constitutionalism and de facto Communism
5
Marjorie Taylor Greene warns ‘working families’ will be worst hit by massive Democrat tax hikes
Subscribe to Daily Headlines »