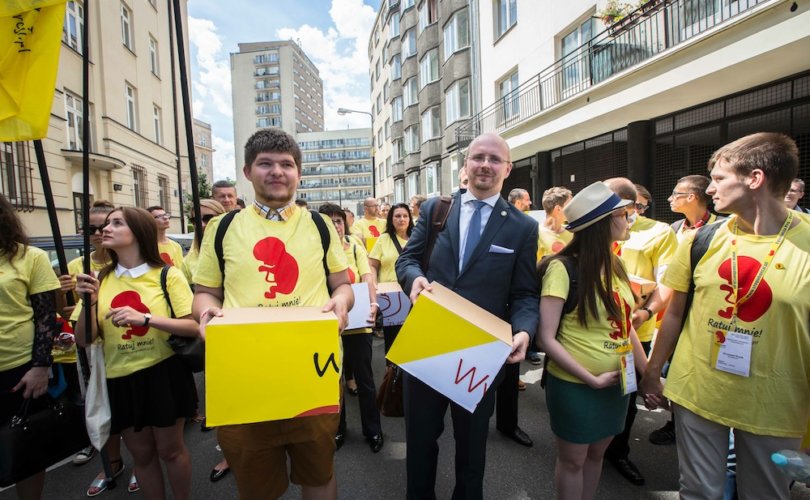 July 8, 2016 (LifeSiteNews) — Almost a half-million signatures supporting Poland’s abortion ban were delivered in 35 boxes to the Polish Parliament on July 5 by a large contingent of activists wearing yellow shirts and waving yellow flags with the red silhouette of an unborn baby and the message “Save Me! www.stopaborcji.pl.”

Surrounded by photographers, the group carried yellow boxes to the lower House of Parliament (the Sejm). The teenagers and adults with children and babies are among the pro-life warriors in the country who want to change the law that allows abortion in some cases — a relic of Communist rule — to make all abortions illegal.

“We want to change the law and those barbarous procedures that do not belong in the 21st century,” said attorney Jerzy Kwaśniewski, one of the authors of the ban. “We want Poland to join the group of two-thirds of the world’s countries which protect the unborn better than us.”

The proposed ban came from a grass-roots movement and, contrary to previous claims, was issued neither by the Catholic Church nor by the government.

According to Polish law, a group of citizens can propose a bill to Parliament. Four lawyers and an expert in bioethics from the Ordo Iuris Institute for Legal Culture spent four months writing the bill, consulting with an array of pro-family and pro-life organizations.

By law, they were required to collect a minimum of 100,000 signatures. The law also stipulates that a signatory’s full name, address, and the Polish equivalent of a social security number be included. Hundreds of activists, coordinated by the Right to Life Foundation, took to the streets to ask their compatriots for support and faced unprecedented attacks, both verbal and physical.

At the same time, Ordo Iuris lawyers were busy defending pro-life activists in courts in cases related to the physical attacks. The organizers also mounted an informational campaign. Experts from Ordo Iuris traveled throughout Poland to talk about the citizens’ bill and explain its legal ramifications. They also faced misinformation and lies, spread by the mainstream media.

Their determination and hard work bore fruit in the form of more than 450,000 signatures. In the following days after they went to the Parliament, more came in, bringing the number close to 500,000. Some envelopes with signatures arrived from Poles living in the United States, Canada and Africa.

Kwaśniewski said Polish parliamentarians have to start working on the bill within three months.

But the abortion ban is just the beginning of the propositions from Ordo Iuris lawyers. They explained that the government’s “current abortion offer” has to be replaced with a system of support that will provide protection for every child and a sense of security to every family. The authors of the abortion ban said “this help should be offered especially in the situation where the unborn child is sick, handicapped or was conceived in rape.”

During a June press conference, Ordo Iuris experts presented one of facets of their plan — prenatal hospice care. A report from bioethics experts Błażej Kmieciak and Zofia Szafrańskia-Czajka, “Prenatal Hospice Care: Vision, Actions and Challenges,” described unborn babies as patients with their own rights for health care. The report was the first of its kind in Poland, where the number of hospices is growing.

All hospices are privately funded and staffed in part by pro bono personnel. The proposed legislation would make palliative care for babies publicly funded. Additionally, Ordo Iuris recommended including perinatal hospice care to medical school curricula, as well as psychology, sociology, theology, and other social sciences.

Funding of perinatal hospices is only one of the legislative proposals prepared by Ordo Iuris lawyers. They wrote a series of additional regulations offering concrete assistance to parents in difficult situations. Some deal with financial aid for families of handicapped children and for mothers who cannot work during pregnancy for health reasons. Others establish better adoption procedures for sick children and those conceived in rape, and for long-term home care for handicapped children. Finally, the legislative proposal encompasses psychological help for families and raped women.

The yearly cost of all proposed legal changes is estimated to be 890 million złoty (approximately $220 million).

After months of analytical work and consultation, more work lies ahead. Kwaśniewski said a massive counter-campaign mounted by the pro-abortion lobby is expected.

Prime Minister Beata Szydło, asked during a press conference how she would vote on the bill and other regulations prepared by Ordo Iuris, responded that the subject was not being discussed by the government or Parliament. “We are currently not working on it,” she added. She is a Law and Justice politician that has a pro-life plank as part of its platform.