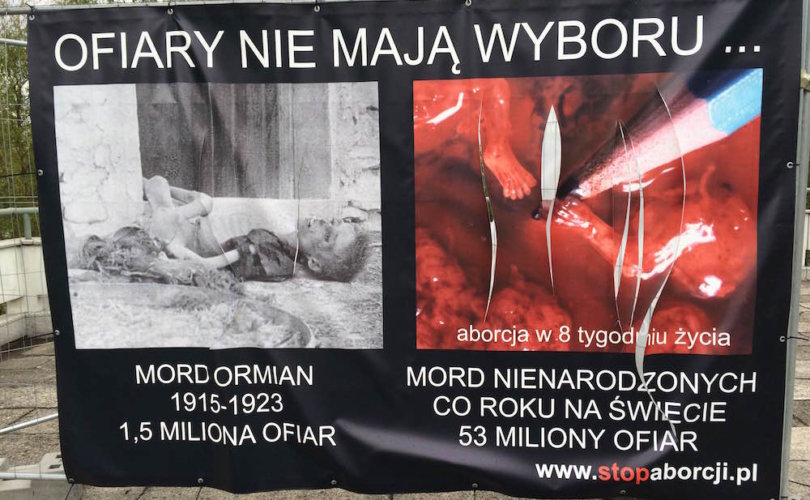 A photo provided by Poland's Right to Life Foundation, which is running the petition drive, shows a sign destroyed.

May 31, 2016 (LifeSiteNews) – Those gathering signatures for the abortion ban in Poland have been the victims of verbal and physical violence. But this has not stopped the pro-lifers, who have already collected 100,000 signatures.

The proposed abortion ban in Poland has recently received much media attention. It involves a little-known legislative procedure that does not exist in the United States. According to Polish law, a group of citizens can propose a so-called civic bill to the Parliament after collecting at least 100,000 signatures of support within three months. These signatures must include a signatory’s full name, address, and the Polish equivalent of a social security number. The proposal came from a grassroots movement, and, contrary to what has been claimed, was initiated neither by the Catholic Church, nor by the government.

A few organizations are behind this legal proposition, but the lawyers from Ordo Iuris Institute for Legal Culture wrote it. Ordo Iuris attorney Jerzy Kwaśniewski explained to LifeSiteNews that this took about four months and involved four lawyers and an expert in bioethics. He added that the details of the bill were discussed with a vast group of pro-family and pro-life organizations and received support from the majority of them. Additionally, “many experienced social activists, doctors, ethicists and lawyers were involved in this process.”

In recent years, pro-lifers have introduced citizens’ bills many times, gathering more than 400,000 signatures each time, but the previous Parliament, ruled by the Civic Platform, was never sympathetic to these initiatives and rejected them all. Ironically, the party that has “civic” in its name, killed any kind of civic bill. The pro-abortion side also attempted to propose a citizens’ bill once, but admitted to receiving only 30,000 signatures, thus falling far short of the necessary threshold. This year they are trying to do it again.

Now the Parliament is ruled by the pro-life party PiS, and there are pro-life supporters in other parties, namely Kukiz'15 and the Polish People's Party. A few independent MPs and even a few Civic Platform MPs may also offer support for the legal protection of the unborn. There is much hope that this time pro-lifers will be able to change the law.

That is why a massive number of volunteers is currently on the streets gathering the highest possible number signatures for the ban, a process that began in April and will end July 6. About 3,500 people registered with the Right to Life Foundation, which coordinates the project. However, nobody really knows how many people are involved. As gosc.pl reported, during a recent pilgrimage for men in Piekary, 3,000 people signed. Among them was French Bishop Jean-Louis Balsa, who showed his support for the ban even though he is not a Polish citizen and his signature cannot be counted.

In some cities, signatures are collected almost every day. Mariusz Dzierżawski from the Right to Life Foundation explained that the gathering of signatures takes place in several dozen cities. Unlike in previous pro-life initiatives, however, opponents have responded with acts of violence.

This violence began in April. Some issues were minor, such as the destruction or theft of large posters showing aborted babies in Legnica. In Rybnik, a nicely dressed young woman holding the hand of a child accosted the activists and said she hoped they would be raped. Other pro-abortion supporters have shouted, “I hope your children will be handicapped,” at the pro-lifers.

Other pro-abortion attempts at sabotage have reeked of desperation. In Cracow, some feminists have tried unsuccessfully to destroy the pages with the signatures by deliberately pouring juice over them. In Poznan, a group of feminists chanted anti-life slogans and lies about the abortion bill and tried to disrupt the gathering of signatures. Fortunately, the police intervened in both cases.

Danuta Kęsik from the Right to Life Foundation explained that her organization often asks the police for protection, with mixed success. The police presence ranges from frequent to non-existent. “Their presence deters the potential attackers from striking,” Kęsik added.

Unfortunately, the need for the police protection is increasingly obvious. The first major assault on the pro-lifers happened in Cracow. Three activists from the Right to Life Foundation, a pregnant woman among them, were setting up an exhibit when a large man approached and began swearing loudly at them. He threatened to burn the exhibit if they didn’t take it down. After the pro-lifers explained that this is a legal exhibit, he tried to tear the poster down and then attacked Adam Kulpiński, one of the activists. He brought him to the ground and tried to strangle him. Fortunately, Kulpiński fought back against his much larger assailant, and received help from another activist. They were able to escape and wait for the police in a safe place.

In another instance in Cracow, a man assaulted another pro-life activist gathering signatures for the abortion ban. The assailant hit him in the face, destroying his eyeglasses. He also spat on the papers containing the signatures and insulted the pro-lifers.

In Gdynia, a passerby insulted seven activists and destroyed the sound system. Fortunately, the police arrived soon enough to catch him. Unfortunately, the gathering of signatures was more difficult without the loud speaker. Maciej Wiewiórka, who coordinates the activists in Gdynia, said that previous gathering was also more difficult than it should have been. “A police officer forced us to turn off the loud speaker under the pretext that some people did not like our presence there.”

In Warsaw, a man also grabbed and smashed a loud speaker on the ground, effectively destroying it. Dawid Wachowiak, a pro-life activist who tried to stop him from fleeing was punched several times and was forced to defend himself with mace. Thankfully, a person who had just signed his name in support of the ban helped to apprehend him. Finally the police took him away. Wachowiak also had to spend an hour on the police station explaining what happened.

The next day, Wachowiak was again assaulted. Another man first tried to discuss the abortion issue with him and his companions, but quickly became vulgar and aggressive. He wanted to overturn the table with the papers and signatures. Once again, another recent signatory came to help. After some pushing and shoving the police came. The perpetrator continued his verbal assaults until the police took him away.

“During the fight for life, we should expect the enemy to strike,” the two-time victim said, “but we can count on people’s help. This helps me put up with everything… and I am very grateful for it.”

The lawyers from Ordo Iuris explained that they will act every time the law is broken. They emphasized that the law protects not only free assembly, but also the citizens’ initiative itself. People who interfere with the gathering of signatures by threat or violence can by punished from 3 months to 5 years in prison.

Dzierżawski commented that aggressive behavior, lies and hysterics show fear and helplessness of the enemies of life. “They know that most Poles are against abortion always and no matter the circumstances,” he said. “All the signs show that our victory is close.”