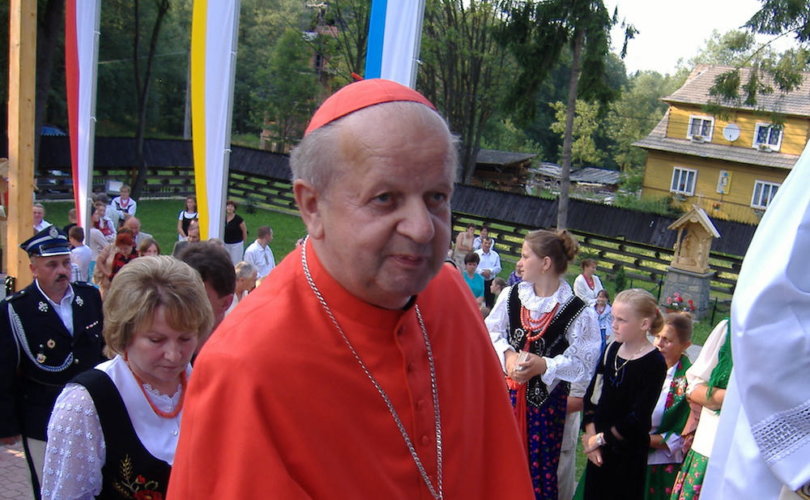 WARSAW, Poland, September 29, 2016 (LifeSiteNews) — In September, Polish homosexual activists launched a campaign Let Us Offer Each Other the Sign of Peace. It met with widespread criticism in the Catholic media and a clear response from the Church’s hierarchy.

Posters showing a handshake — one hand with a rainbow bracelet symbolizing LGBT people and the other with a rosary on the wrist — were supposed to create a positive message. “However, the campaign could seem innocent only to people who don’t know social context nor global LGBT movement,” Michał Barcikowski from the Christianitas magazine told polskieradio.pl.

The vocal and active Campaign Against Homophobia (CAH) organized the campaign. Two other groups — Tolerado, and Faith and Rainbow — joined them. CAH regularly threatens people with lawsuits and attacks the freedom of belief and religion in courts. Now, in its latest campaign, Let Us Offer Each Other the Sign of Peace, it discusses Christian values and the “necessity of respect.”

The organizers wrote on their website that the aim of the campaign is to remind the faithful that “from the Christian values flow the necessity of respect, openness, and willing dialogue with all people, including homosexuals, bisexuals, and transsexuals.” They pointed out that this is the first time Catholic journalists were invited and joined in the project.

Indeed, three small publications that use the name Catholic became involved in the promotion of this campaign. However, contrary to what the dissident U.S.-based National Catholic Reporter suggests, they are neither “prominent” nor mainstream.

Incidentally, NCR incorrectly translated the intended name of the campaign to Let's Exchange a Sign of Peace, a phrase not used during the Catholic Mass.

“Those are niche magazines which nobody wants to read,” Rev. Dariusz Oko told wpolityce.pl of the three publications. He added that Więź (Connection) and Tygodnik Powszechny (Universal Weekly) “have rejected the teachings of the Catholic Church and openly promoted homo-heresy for a long time.”

Dominika Kozłowska, the editor-in-chief of the third publication Znak (The Sign) supporting the campaign, participated in another unsuccessful project. In April, she was one of the signatories of the “Open Letter of Concerned Catholics” to Polish bishops. They asked the Church’s hierarchy to reconsider support for the proposed abortion ban. The letter directly advocated for abortion and birth control, statements against the teachings of the Church, and promoted the belief that birth control lowers abortion rates.

But even among the people working for the controversial publications, there is some disagreement. One of the editors of Więź could not accept its involvement in the homosexual campaign. Tomasz Kycia wrote, “I have been living for 28 years in Germany and not once did I see an LGBT campaign aimed at authentic encounter and reconciliation.” He wrote it was always about “acceptance of thinking and acting of one side” and changing the teaching of the other (the Church).

And some activists are already open about that. Marta Abramowicz, a lesbian, told the leftist newspaper Gazeta Wyborcza that the aim of this campaign is to change the Church, understood as a community of faithful, from within. She added, “We count on the ‘revolution’ of the faithful.”

Rev. Dariusz Oko, who has been researching for more than a decade the gender ideology he calls homo-ideology, shed some light on how this can be done. “This campaign aims to desensitize people to sin and to change our mentality by using manipulations and lies,” he explained. He added that the campaign was financed by George Soros’ Open Society Foundations.

The whole campaign caused shock and outrage, wrote the Catholic Institute of Rev. Piotr Skarga. The group wrote a Letter to the editorial staff of Więź, Tygodnik Powszechny and Znak hoping they would back away from “this homo-heresy.”

Another group of Catholics used the popular platform CitizenGo Poland to protest “the use of the rosary and of the liturgical sign of peace to challenge the teachings of the Church and to desensitize us to sin.” The author of the protest pointed out that it is clear from the videos accompanying the posters that the organizers wanted to convince people that homosexuals can be happy only in a relationship with another homosexual and that Christianity can be reconciled with homosexual acts.

Along with lay Catholics, the Church’s hierarchy reacted. “Unfortunately, it is clear that the campaign uses Christian teaching not only to promote respect for homosexuals but to approve the homosexual acts and same-sex unions as morally good,” said Cardinal Stanisław Dziwisz, who spoke first on the matter. Dziwisz heads the Krakow archdiocese where Znak and Tygodnik Powszechny are distributed.

Cardinal Kazimierz Nycz in Warsaw, where the third magazine Więź circulates, sent a press release signed by Rev. Przemysław Śliwiński. He pointed out that the campaign criticizes the Church’s teaching on homosexuality. He also revealed that he already spoke with the editors in question.

Finally, on September 14, the Bishops' Conference wrote clearly and directly that Catholics should not take part in the LGBT campaign Let Us Offer Each Other the Sign of Peace. Archbishops Stanisław Gądecki and Marek Jędraszewski and Bishop Artur G. Miziński reminded that the Catholic Church is the only institution that for 2,000 years has been tirelessly proclaiming the dignity of all human beings without exceptions. The bishops wrote that respect for every person is incompatible with homosexual acts. “Homosexual acts are objectively morally evil, and as such can never be accepted by the Church.”

The bishops concluded, “Evil is evil not because it was prohibited but because it harms a person, being contrary to God’s plan. Thus, the Church — as a good Mother — must clearly call it by name. The attitude of tolerance for evil would be in fact indifference towards sinful brothers and sisters. It would have nothing to do with mercy or with Christian love.”