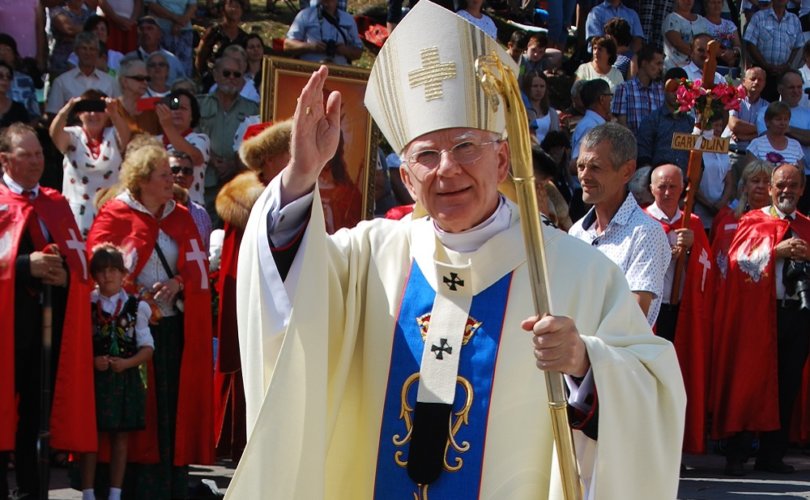 “Currently we are living at a time in which the next great threat to our freedom has appeared,” said Archbishop Marek Jędraszewski, “and it is of a totalitarian nature.”

“Its source is — just like the totalitarianisms of the 20th century — a radical rejection of God,” he continued.

“As a consequence of this rejection, a new vision of man is being proclaimed in which he becomes a caricature of himself. As part of gender ideology, there are attempts to obliterate the natural differences between woman and man. Moreover, through the aggressive propaganda of LGBT ideology in the name of so-called ‘tolerance’ and ‘progress,’ that which is most sacred to us is mocked.”

Jędraszewski also declared that people, “people of faith” among them, are being forced to spread LGBT ideology. Their freedom of conscience “broken,” they are encouraged to turn away from “the principles of their Christian faith.”

“This clearly reminds us of the totalitarian times of the [communist] Polish People’s Republic, when social advancement was guaranteed only to members of the Communist Party, and [Christian] believers were treated like second-class citizens.”

The archbishop also warned that some local governments had introduced sex education programs recommended by the World Health Organization to schools and kindergartens, resulting in great spiritual harm to children and young people.

“All of this is clearly an offense to God the Creator,” he wrote.

He counseled the people of his archdiocese against indifference about this “anti-morality offensive” that threatens “individuals, families, societies, and nations.”

As archbishop of Kraków, Jędraszewski is a successor to Karol Wojtyła, now known as St. John Paul II, who was the metropolitan of the ancient diocese from 1964 until 1978. Jędraszewski began his letter with a reminder of two important anniversaries linked to the life of the Polish saint: the 40th anniversary of his first visit home to Poland as pope and the centenary of his 1920 birth. The archbishop noted his predecessor’s “great struggle” for Christian and national values and said these struggles had been shared by all Poland. He cited the saint’s deep gratitude to those who had fought for Polish freedom in 1920 and declared that the saint had not only “repaid the debt,” but also “multiplied the treasure Poland was to him.”

Jędraszewski encouraged the people of his archdiocese to imitate St. John Paul II in paying  “back the debt” to the saints and other heroes of Polish history by defending Poland’s Christian values, which it has possessed for over a thousand years.

“This is not only a duty to the noble achievements of our ancestors, but also to future generations of Poles,” he wrote.

“This is especially the responsibility of parents, who above all should care about the happiness and prosperity of their children.”

Parents who are indifferent to or even support gender ideology, LGBT propaganda, and the WHO programs are most likely to see their children become their victims.

“And for parents who truly love their children, there can be no greater tragedy,” the archbishop declared.

Jędraszewski concluded his letter by announcing that from November 2019 until the end of 2020, there will be silent adoration in all churches and public chapels in the archdiocese for half an hour before the evening Mass, followed by a decade of the rosary and prayers asking the intercession of St. John Paul II.

“There’s definitely a culture war in Poland right now, and in recent months the archbishop has become a major symbol in that war,” said Filip Mazurczak, an American student in Kraków, to LifeSiteNews.

Mazurczak indicated that Polish media reaction to the archbishop’s speech was predetermined.

“Polish society is extremely polarized right now, as you know, so the Polish papers’ reactions are predictable,” he said.

“[Archbishop Jędraszewski is] a hero to Gazeta Polska, Do Rzeczy, Fronda and so forth, but he is the bête noire of Gazeta Wyborcza, etc.”

Mazurczak suggested that Poland is in the grip of a “religious cold war.”

“I think we are seeing another religious cold war in Poland, similar to that of the 1990s, although maybe a little less ugly,” he told LifeSiteNews.

“In the early 1990s, the main battlegrounds for the religious cold war were abortion, religious education in public schools, and references to Christian values in the Polish constitution. Now, it's LGBT,” he continued.

Mazurczak believes that although the LGBT movement has a lot of money and political influence, Catholic Poland will not be as easy to defeat as Catholic Ireland.

“In Western Europe (Ireland, for example), [LGBT ideology] has been storming through society with little resistance,” the student noted. “[But] while Warsaw hipsters may love LGBT as much as they love veganism, bands nobody else has heard of, and not shaving, a large part of Polish society is conservative and Catholic and opposes this,” he continued.

“So what's happening in Poland is the same thing that's been happening around the world, but it's faced much more resistance [here] than in Western Europe.”