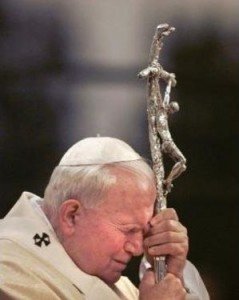 The relatio is 'a revolution against the teaching of John Paul II,' agreed Dr. Thomas Ward, a corresponding member of the Pontifical Academy for Life.giulio napolitano / Shutterstock.com

ROME – The controversial mid-term report issued by the Vatican Monday, intended as a summary of the discussions at the Extraordinary Synod on the Family, is flawed and clearly departs from the magisterial teachings of Pope St. John Paul II, the president of the Polish Bishops’ Conference said.

Archbishop Stanislaw Gądecki of Poznań told Vatican Radio on Monday that the document, known as the Relatio post disceptationem, or “report after the debate,” is guilty of the “sin of omission” in its presentation of Catholic doctrine.

The document, among its most controversial propositions, asks whether “accepting and valuing [homosexuals’] sexual orientation” could align with Catholic doctrine; proposes allowing Communion for divorced-and-remarried Catholics on a “case-by-case basis”; and says pastors should emphasize the “positive aspects” of lifestyles the Church considers gravely sinful, including civil remarriage after divorce and premarital cohabitation.

Gądecki said the document proceeds “as if the world's view prevailed and everything was imperfection which leads to perfection,” according to a translation by Rorate Caeli.  During the Synod father’s discussion of the document Monday morning, he said, “attention was paid not so much to what this document says, but to what it does not say.”

“Speak about the practical exceptions, but we also need to present the truth,” he added.

The archbishop also expressed concern that the document seems to endorse the homosexual agenda. “The points that speak of children entrusted to same-sex couples are formulated somewhat as if this situation is being praised!” he said. “This is also a defect of this text, which should be an incentive to fidelity, family values, but instead seems to accept everything as it is. It created an impression that the teaching of the Church has been merciless so far, as if the teaching of mercy were beginning only now.”

The cardinal spoke shortly after Hungarian Cardinal Peter Erdo, the synod’s general relator, read the document to the Synod fathers, then discussed it a Vatican press conference.

The document is merely provisional and forms the basis of discussion during this second week of the Synod, which will eventually lead to what is expected to be a much-revised final version.

In a candid interview published Tuesday morning, U.S. Cardinal Raymond Burke charged that the Synod’s general secretariat, made up of the gathering’s organizers, has manipulated the public presentation of the Synod.

“All of the information regarding the Synod is controlled by the General Secretariat of the Synod which clearly has favored from the beginning the positions expressed in the Relatio post disceptationem of yesterday morning,” he said.

The mid-term report, said Burke, proposes views that “faithful shepherds … cannot accept,” and betrays an approach that is “not of the Church.” He also called on Pope Francis to issue a statement defending Catholic teaching.

Dr. Thomas Ward, a corresponding member of the Pontifical Academy for Life and a founder of the National Association of Catholic Families in England, agreed with Gądecki that the document is a radical departure from Pope St. John Paul II’s magisterium. The relatio, said Ward, is “a revolution against the teaching of John Paul II.”

“It is an insult to a great saint, a saint of our families,” he continued. “It is clearly time for people all around the world to wake up to the fact that this is an anti-Catholic revolution.”