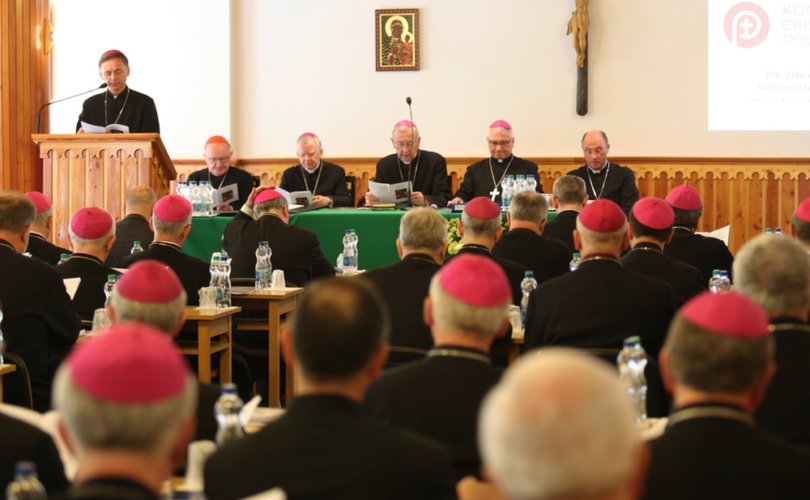 LUBLIN, Poland, September 3, 2020 (LifeSiteNews) – The Conference of Polish Bishops has written a pastoral paper encouraging respect for people who identify as LGBT while pointing out the problems with LGBT ideology.  The long, often technical, document appeared on August 28.

“The obligation to respect people belonging to the LGBT+ movement does not mean uncritically accepting their views,” the bishops wrote.

“On the contrary, it means their careful analysis and verification in the light of objective truth about human sexuality and the principles of the common good,” they continued.

“The ideology of these movements and their demands are burdened with numerous errors harmful to the life of society: for example, the accusation of lacking tolerance, behind which an ideology negating the difference and natural complementarity of men and women frequently hides. The appeal to nature mainly hides human biology, a cultural option, gender impulse or psychosexual emotionalism.”

In “Stance of the Conference of the Polish Bishops on the LGBT+ Question”, the bishops also call for counseling for people who wish to “regain their sexual health and natural sexual orientation.”

“In view of the challenges created by gender ideology and LGBT+ movements, and especially keeping in mind the difficulties, suffering and spiritual ruptures experienced by these people, it is necessary to create counseling centers (also with the help of the Church or also through her structures) offering help to people who want to regain their sexual health and natural sexual orientation,” the bishops wrote.

According to the Conference of Polish Bishops’ website, the bishops stress that the Church is open to dialogue with “every person of good will seeking the truth.” The bishops hold up as their model Pope Francis, who they say “meets with people identifying themselves with LGBT+, kindly extends a hand to them, expresses understanding of their tendencies, but at the same time does not avoid a clear presentation of the teachings of the Church about gender ideology or practices against nature and the dignity of man.”

In 2016, the pontiff referred to a woman who had undergone a “sex-change” operation as a “man,” saying that she had “married” another woman. HE mentioned receiving the pair in the Vatican and clarified that the post-operative female was “He that was her but is he.” More recently the Pope praised a woman religious for opening a “trans home” for men who present as   female and referred to the men as “girls.”

The Polish bishops began their 27-page, 105 paragraph document with a reaffirmation of the Church’s mission in the world and a declaration of their reluctance to abandon people with same-sex desires.

“At the core of the Church’s mission is the duty to witness to the truth flowing from the Gospel and the law of God,” they wrote.

They added that this teaching is also inspired by Christ’s invitation to open hearts wide to him and that only Christ can “soothe the personal grief and moral ruptures of people identifying themselves as LGBT+.”

“Only He can bring peace and inner harmony to their lives. Lord Jesus directs to them in a special way the words ‘Come to Me all who labor and are heavy laden, and I will give you rest’ (Mat 11:.28),” they wrote.

The paper is divided into four sections: “The Sexuality of Men and Women in the Christian Vision of the Person”; “LGBT+ Movements in a Democratic Society”; “LGBT+ people in the Catholic Church”; and “The Church regarding the LGBT+ position in matters of the sexual development of children and young adults.”

The bishops recognize that the Church and human society have been presented with many new challenges, thanks to the “so-called sexual revolution” and the “cultural and moral changes” that came along with it.

“The rejection of traditional morality has led to deep changes in the understanding of human sexuality,” they wrote.

“Gender ideology as well as the attitudes characteristic of LGBT+ are a particular expression of these changes.”

Reception of the document has been mixed.

Krystian Kratiuk of  Polonia Christiana magazine told LifeSiteNews via email that “atheists and Church progressives” have criticized the document harshly, particularly because it supports therapy for people with same-sex attractions.

“Left-wingers accuse [the bishops] of wanting to forcibly convert people from homosexuality, which is nonsense since the bishops wrote only that therapeutic programs should not be abandoned for people who feel the need to combat disorderly sexual tendencies,” the journalist wrote.

Kratiuk believes that “from a conservative point of view” the document is “generally good” but has a “flaw.”

“Namely, it introduces the phrase ‘LGBT+’ into official Church documents in Poland, which the Church has not used at all so far,” he said.

“Moreover there is talk of ‘LGBT+ people’, which we know is a word artificially created by gay activists,” Kratiuk added, noting that a year ago the bishops had condemned the phrase when Warsaw mayor Rafał Trzaskowski signed a “LGBT Charter of Rights”.

At press time there was no official translation of the Polish bishops’ document into English.