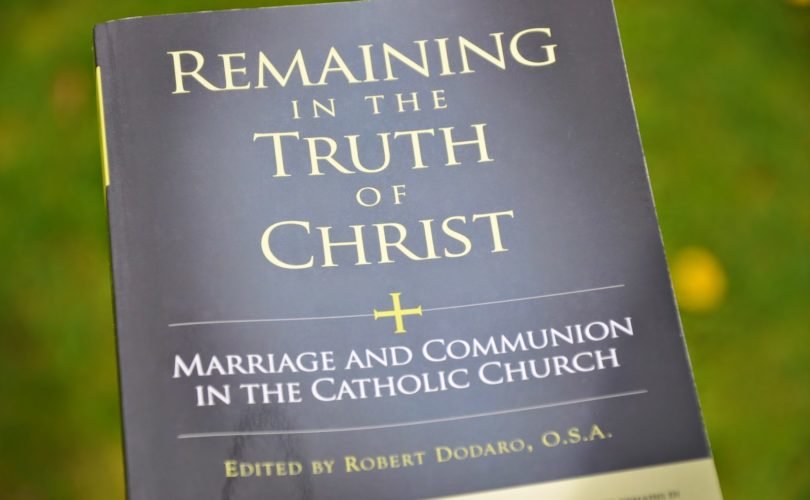 April 13, 2015 (LifeSiteNews.com) – The Polish Catholic bishops have given a wholehearted endorsement to the famous “five Cardinals’ book” authored to defend Church teaching on marriage and family in advance of the 2014 Extraordinary Synod on the Family.

The book, titled “Remaining in the Truth of Christ: Marriage and Communion in the Catholic Church” in English, was published in Poland “under the patronage” of the president of the Polish bishops’ conference, Stanisław Gądecki, archbishop of Poznan.

According to Archbishop Gądecki, it would be “false compassion” to suggest that the Church’s practice should be changed. “Therefore, we strongly oppose the proposal, ‘the merciful’ solution to the issue of divorce supported by Cardinal Kasper.”

In a statement on the diocesan website, the Archbishop of Poznan wrote, “This book is an essential aid to understanding the Synod on marriage and family. In particular, for the understanding of why fidelity to the truth about marriage and family is an indispensable foundation of the Church’s charity for people civilly divorced and remarried a new civil union.”

“Before the start of the Extraordinary Synod on the Family, Cardinal Walter Kasper presented his view on this delicate and important issue. Much attention was also devoted to the issue of Eucharistic communion and the capabilities to include divorced people who live in civil unions.”

The nine essays in the book “show that in the traditional Catholic doctrine, based on the teachings of Jesus, and in the current pastoral practice, there is no shortage of real charity and compassion.”

The bishops’ support for the book is another signal that they will not back any move from the so-called “progressive” faction to change the discipline of the Church in refusing Holy Communion to those in adulterous unions. In March, the Polish episcopate issued a declaration that there could not be any change either to the Church’s teaching or her practice.

“The teaching and the tradition of the Church shows that people living in non-sacramental union deprive themselves of the possibility of receiving Holy Communion,” they said. “Pastoral care must be provided for those living in such unions so that they may be able to keep the faith and continue in the community of the Church.” They added that the Polish episcopate would “defend the teaching of [Pope] John Paul II.”

The push for a change in the Church’s “pastoral practice,” was lobbied for by a faction led by the German Cardinal Walter Kasper at the last Synod in October 2014, and followed by an international who’s-who of the far left of the Church’s hierarchy.

The conflict turned into an uproar as the push was very publicly opposed by a group of orthodox bishops and cardinals. Leaders from both sides in the conflict have continued to argue their case in media interviews.

Unconfirmed reports said that distribution of the book to its intended audience of bishops and cardinals gathered at the Vatican was actually blocked by the Synod’s organizers.