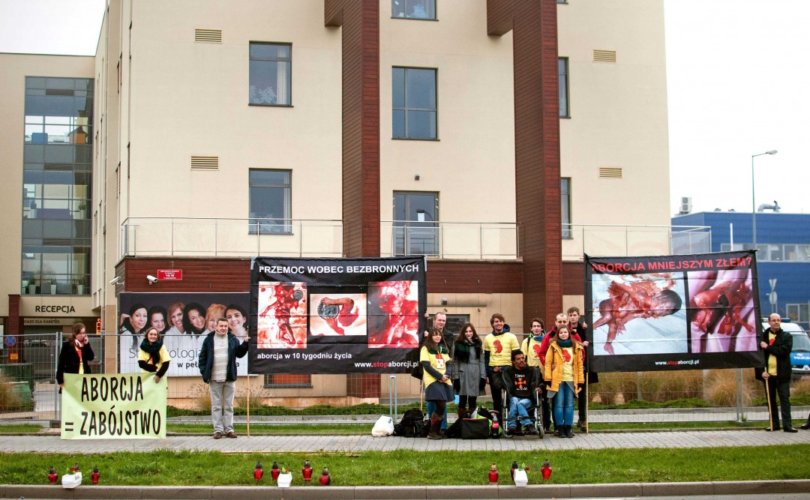 Correction: Pro-Familia Hospital in Rzeszów, while blessed by the bishop at its opening, is not formally a Catholic hospital as originally indicated in the headline and lead.

RZESZOW, Poland, May 24, 2016 (LifeSiteNews) – An infamous private hospital in Poland has reportedly ceased committing abortions after every doctor at the hospital signed a clause opting out based on conscience.

The abortions at the Specialist Hospital Pro-Familia in Rzeszów were first exposed by midwife Agata Rejman in January 2014 at an emotional press conference where she discussed her traumatic experiences at the hospital.

The hospital never denied committing abortiosn, but nonetheless, shortly after the press conference, it threatened Rejman with a lawsuit. The manager of the hospital, Radosław Skiba, sent her a letter accusing her of damaging the reputation of the clinic. He demanded retraction of “false statements,” particularly in relation to the claim that the hospital “kills children.” He also demanded that she pay 50,000 złotych (approximately 17,000 USD) for a children’s hospice or face legal action. Ultimately, the lawsuit against Rejman did not happen, and she found another job.

Local pro-lifers were shocked by the hospital’s treatment of Rejman and by the abortions that took place there, especially since the local bishop had blessed the facility during an opening ceremony in 2011. Adding to their shock was the fact  that abortion is considered rare in Poland, since it is illegal except in three cases.

Local pro-lifers quickly responded to Rejman’s call for help. Jacek Kotula, an activist from The Right to Life Foundation vowed to organize protests if the hospital did not stop its practices. He kept his word. But after dozens of pickets in front of the hospital and in different places in Rzeszów, he found himself in trouble. After one demonstration, the police confiscated big posters of unborn babies put along with the photos of Pro-Familia doctors. Soon after, the hospital sued him and another activist, Przemysław Sycz.

The lawsuits were filed in both criminal and civil courts and alleged that the activists were disseminating false information when they equated abortion with killing. The hospital claimed that the activists had generated negative publicity in the media and harmed the hospital’s business. The criminal case ended up clearing the defendants from wrongdoing. However, the civil case went in the opposite direction. The accused hope that the Supreme Court will eventually repeal the verdict of the lower court.

“The lawsuits did not scare away the activists,” said Mariusz Dzierżawski from the Right to Life Foundation, adding that they bought a billboard close to the hospital informing the public about abortion. “One of the pickets was recently televised by the Polish public television,” he added.

And now the activists can proclaim their victory, even if their legal problems are not fully resolved.

The hospital stopped performing abortions because all the gynecologists working there signed a conscience clause. The hospital director Radosław Skiba confirmed that they no longer perform abortions. He explained that the facility works with the local perinatal hospice and offers professional help to each family. He claimed that the change had nothing to do with the actions of the Right to Life Foundation.

Catholic portal Gosc.pl gave the pro-lifers its due credit, but also wrote that the issue is more complex. The first reason for the change is associated with the 2015 decision of the Constitutional Court giving doctors the right to sign the conscience clause. Another reason is linked with the owners and experiences of a Pro-Familia sister hospital located in Łódź. Professor Dariusz Borowski, who owns the second Pro-Familia, admitted that “there were discussions on the subject. We showed which way would be just and brave.” Ultimately, Pro-Familia in Rzeszów followed the lead of her sister-hospital, which has a long and fruitful relationship with a local perinatal hospice run by Fundacja Gajusz.

What’s more, Gosc.pl showed that the commitment of Bishop Jan Wątroba of Rzeszów and Archbishop Marek Jędraszewski of Łódź were instrumental in the Pro-Familia conversion. The portal also emphasized the importance of the involvement of hospital chaplains who immediately help families facing difficulties.

Dzierżawski argued that the change of hospital policy shows that “the pickets are an effective tool in fighting abortion.” This success was even more meaningful since, as Dzierżawski pointed out, “one Pro-familia doctor thought back then that abortions should be performed in every hospital in Poland.” According to him, several dozen demonstrations did the job and awakened the conscience of the gynecologists.

“We continue the ‘Hospitals without Abortionists campaign’,” Dzierżawski said. “If the hospital most aggressive against pro-life activists can stop killing the unborn, then any and every hospital can and should do it. Only courage and perseverance are needed.”