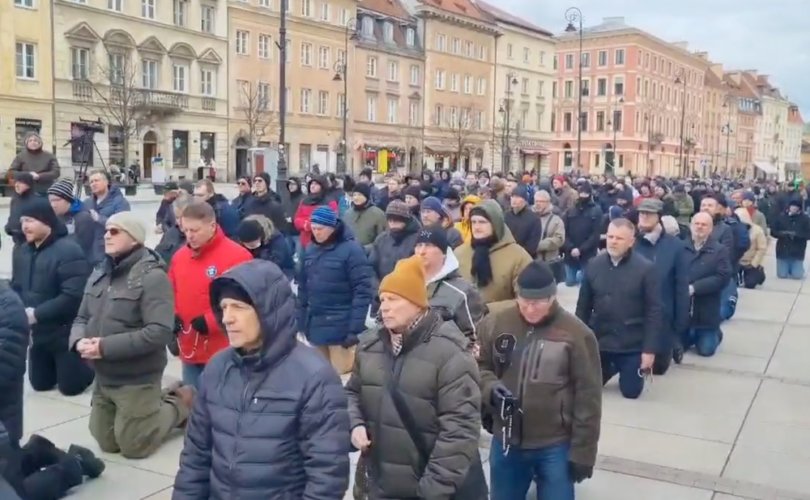 (LifeSiteNews) — Polish Catholic men got on their knees last week in the nation’s streets to pray the rosary as Russian forces continue their all-out assault against neighboring Ukraine.

Videos shared widely on social media show large groups of Polish men in the northwestern city of Szczecin and the nation’s capital of Warsaw kneeling or standing in the streets reciting the rosary even as hundreds of thousands of Ukrainian refugees pour across the border seeking asylum.

Men’s rosary rallies have become a common sight in Poland in recent years, with groups such as Wojowników Maryi (Warriors for Mary) inviting thousands of young men to gather together in Polish cities to pray publicly on the first Saturday of the month.

This month the prayer meetings have generated wider recognition as Poland, which boasts an 87% Catholic population, has found itself involved in helping ameliorate the growing humanitarian crisis caused by the Russian invasion of Ukraine on February 24.

In the less than two weeks since the war began, Poland has accepted roughly a million refugees, mostly women and children, fleeing the violence and devastation in Ukraine.

Polish families have welcomed asylum-seekers into their homes, while others have been afforded accommodation in refugee centers.

As the war in Ukraine rages on, disturbing footage has emerged showing the widespread civilian casualties incurred by Ukraine as Russian forces reportedly target hospitals, schools, and residential areas.

The United Nations has reported over 1,000 civilian casualties since the Russian assault began, including 351 who have been killed. Reportedly, 10 of those killed were children.

Roughly 1.5 million Ukrainians, mostly women and children, have fled the country since the invasion, according to U.N. reports.

Under the state of martial law declared by the Ukrainian government in response to the Russian invasion, the country’s men between the ages of 18 and 60 have been ordered to stay behind and fight as women and children seek refuge in Poland and other neighboring countries.