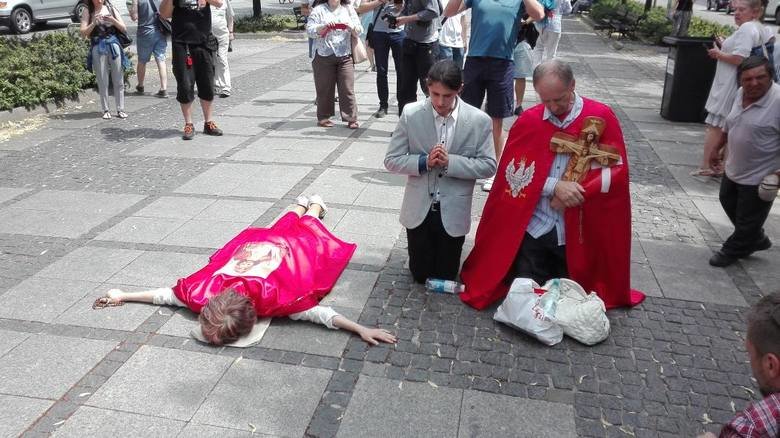 Częstochowa is synonymous in the Catholic mind with the Jasna Góra monastery and its icon of the Blessed Virgin Mary, but it is a contemporary town with a population of over 200,000 people. This past Sunday it also held its first Pride parade, timed to coincide with a massive Catholic pilgrimage.

The so-called “Equality March in Częstochowa”, consisting of about 600 people, including members of the SLD (“Democratic Left Alliance”) party and Antifa, coincided with several other events in the southern city, including the pilgrimage of 100,000 fans of Polish Catholic radio station “Radio Maryja” to the Jasna Góra shrine. Originally the “Equality” marchers planned to march to the monastery themselves. However, when they got as far as Bieganski Square, they found the way blocked by dozens of furious opponents, three of whom lay down in Most Holy Virgin Mary Avenue to impede their progress.

After police dispersed the Catholic patriots, they regrouped in the park at the foot of the slope to the shrine where the crowds of Catholic pilgrims were praying. This time, the police redirected the LGBT march to the municipal art gallery.

Polish Catholics considered the LGBT march to the Jasna Góra monastery to be a “provocation” of the hundred thousand pilgrims, including the Polish prime minister, gathered there. Prayers had been offered for days for the “Equality” march’s cancellation. Witnesses to the parade were particularly horrified by the emblazoning of the LGBT rainbow flag with the crowned eagle of the Polish nation.

Joachim Brudziński, the head of the Polish Ministry of the Interior, thanked police for keeping the peace in the difficult circumstances while condemning the “Equality March” for its planned assault on Jasna Góra.

“Luckily, the obvious cultural and religious provocation of LGBT groups aimed against pilgrims gathered at the foot of Jasna Góra ended safely, thanks to the police,” he said.

The PiS (Law and Justice) member is also going to submit a legal complaint against participants in the “Equality” march for having desecrated national symbols.