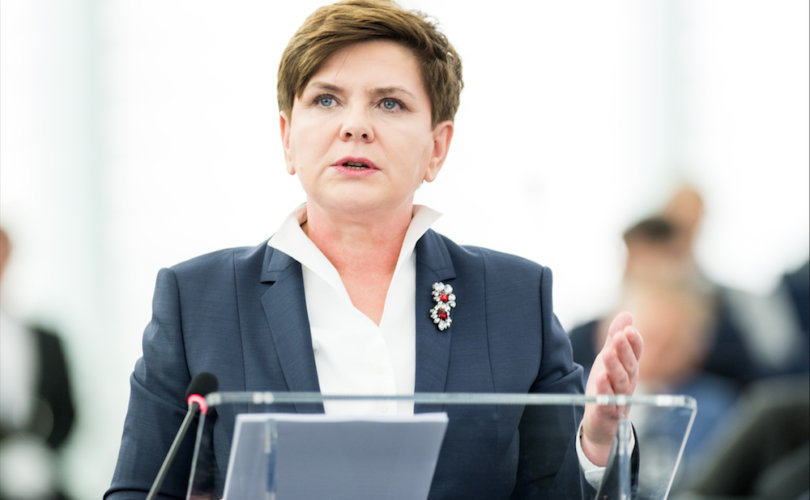 WARSAW, Poland, November 4, 2016 (LifeSiteNews) – On Friday, by a vote of 267 to 140, the Polish lower House passed the “Pro Life” bill offering help for women with difficult pregnancies. The program is supposed to kick in next year.

The bill was passed in an unusually speedy parliamentary procedure. It provides a one-time financial aid payment of PLN 4,000 (approximately 1,000 USD) to mothers who give birth to seriously disabled or terminally ill babies. The allowance will be given regardless of the family income. Palliative, psychological and medical care is also included in the bill. Furthermore, the regulation also establishes the position of family assistant whose role is to coordinate the help for families.

Elżbieta Rafalska, the head of Ministry of Family, Labor and Social Policy, told the Polish Press Agency (PAP) that about 2,000 family assistants would be hired to fill this position. She specified that those assistants are separate from already existing social workers. Additionally, the government promised to completely reform health and social aid for needy families.

Prime Minister Beata Szydło came up with the idea of a “Pro Life” program the day the Parliament rejected the abortion ban, which came as a shock to pro-lifers. The move, officially aimed at discouraging abortions of severely ill or disabled babies, is also seen as an effort to appease disappointed pro-life voters. The ruling Law and Justice party appears unwilling to grant legal protection to the unborn, despite having a “pro-life” plank.

Some pro-lifers and journalists see the bill more as a PR move.

Wojciech Teiser wrote in a Catholic weekly gosc.pl that “the program ‘Pro Life’ is a feeble attempt at covering shame Law and Justice brought upon itself by rejecting the citizens bill banning abortions.” Teiser wrote that the only new and concrete idea in it is the one time benefit of PLN 4,000, which he deemed inadequate. According to him, the ruling party is playing a “game of deception.”

Kaja Godek from Life and Family organization told the Catholic Information Agency (KAI) that the “Pro Life” bill is just a social program giving some small allowance, and was written to avoid the abortion ban. She astutely pointed out, “It’s like fighting against slavery by buying off some of the slaves.” Godek also mentioned that once the government has a budget problem, the program could be at risk of elimination. Instead, she suggested a tax break or exemption for needy families.

Michał Wałach from Conservative and Catholic pch24.pl did not like the bill either. He doubted that it would have the intended effect of reducing abortions. To prove his theory, he gave the example of Spain, which had similar abortion legislation to Poland’s. Wałach pointed out that significant financial help offered to Spanish women with difficult pregnancies had no impact. The number of abortions grew, only to exceed 100,000 per year. He concluded that the name of the “Pro Life” bill is highly deceptive since it has nothing to do with protecting life and is not against abortion.

However, the Ordo Iuris Institute for Legal Culture, who authored the failed abortion ban, argued that the government program is a good step forward. Nevertheless, the lawyers think it should go much further. They suggest a complete reform of perinatal hospices and palliative care for children. According to Ordo Iuris, the support in raising handicapped child should be offered for all families, not only to babies prenatally diagnosed as such. Ordo Iuris experts already presented the drafts for those propositions to the relevant ministers in June 2016.

In general, the “Pro Life” bill is applauded by the pro-government media, and criticized by the opposition and the feminists.