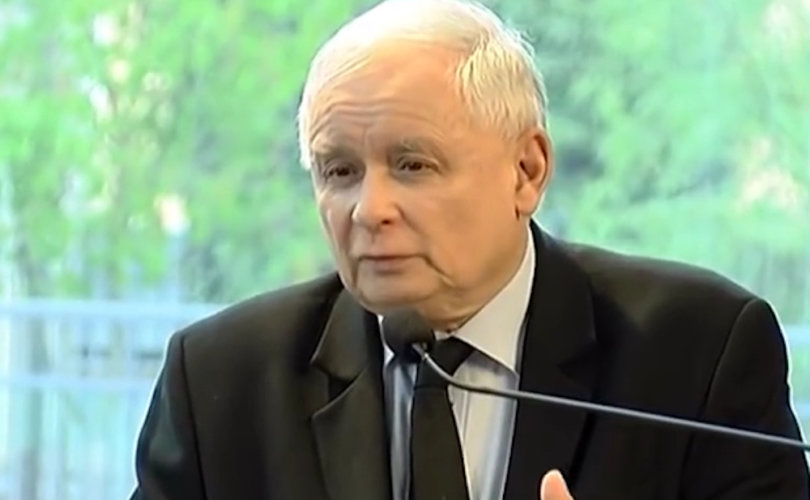 WŁOCŁAWEK, Poland, April 26, 2019 (LifeSiteNews)―The leader of Poland’s governing party called LGBT and gender ideologies a foreign attack on the family and stated everyone has to accept that Polish culture is inextricably Christian.

Jarosław Kaczyński, 68, is the current leader of Poland’s Law and Justice (Prawo i Sprawiedliwość, or PiS) party. On Wednesday, April 24, he gave a speech about patriotism at a conference hosted by the Diocesan Museum in the southeastern Polish town of Włocławek. Participants were celebrating the 100th anniversary of Poland’s recovery of independence in 1919. Both the conference and Kaczyński’s speech were entitled “Being a Pole: pride and duty.”

In his 52-minute speech, the PiS leader spoke on several themes, including Poland’s deep Christian roots and the threat new “gender” and LGBT ideologies pose families.

“We are dealing with a direct attack on the family (and) on children: this sexualizing, the LGBT movement, everything together with gender (theory), this whole movement questioning every kind of affiliation,” Portal Włocławek quoted Kaczyński as saying.

“Of course it has a relationship to a certain kind of ideology, philosophy, which arose earlier in the West. All of it is imported to Poland.” he continued.

“Today they truly threaten our identity, our nation, our survival, and the Polish state.”

The elder statesman, once Poland’s prime minister, stated his belief that the foundations for a policy of patriotism should be worked out and repeated his byword that “It is worthwhile being Polish, and it is worthwhile for Poland to survive.”

“It’s necessary to acknowledge that the policy coming from this short but patriotic premise must accept and affirm the sovereign Polish state, sovereign within the European Union and NATO,” Kaczyński said. “The second condition is the gaining of appropriate status and position.”

“Questioning the position of the Catholic Church in Poland is simply unpatriotic.”

Kaczyński’s firm statements about LGBT and gender ideology, taken out of context, have made headlines in the United States although they went largely unreported in Poland outside of local and Catholic media. Although the leader of the governing party, Kaczyński is neither Poland’s president nor its current prime minister.

Poland resists attempts to transform the central European, largely Christian and family-oriented nation into a protectorate of the secular, socialist, multicultural European Union. Keenly aware of its history, Poland has suffered political erasure twice in the past 225 years, first during its Third Partition by Russia, Prussia, and Austria (1795 – 1919) and then after the September 1939 invasions by Germany and the USSR. During the combined German-Soviet occupations, approximately six million Polish citizens were killed. After the so-called “liberation” of 1945, Poland remained an uneasy satellite of the communist, atheist Soviet Union until 1989. The last Russian soldiers left Poland in September 1993.

In December 2018, Poland and Hungary annoyed other European Union states by vetoing the inclusion of the “LGBTIQ” acronym in a joint statement by employment and social affairs ministers meant to promote “gender equity in the digital era.”