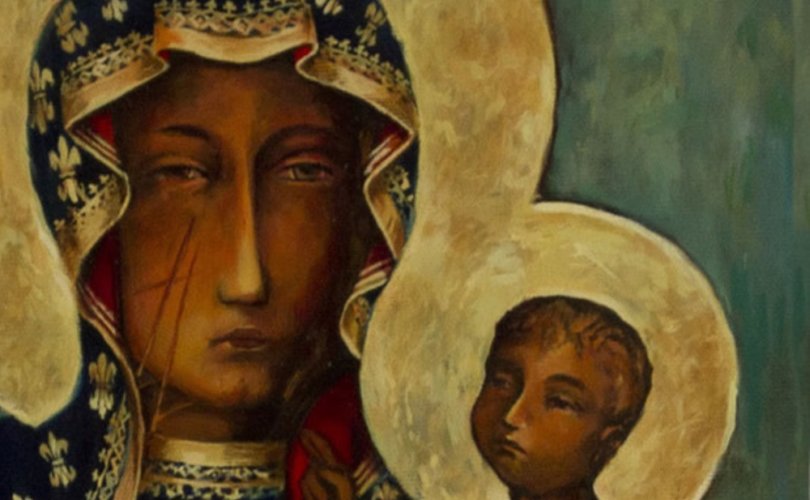 Our Lady of Czestochowa, the 'Black Madonna'

PŁOCK, Poland, May 7, 2019 (LifeSiteNews) ― A woman was arrested by Polish police on suspicion of having profaned an image of the country's most sacred icon of the Blessed Virgin Mary, the “Black Madonna”, with pro-homosexual rainbow colors

Elżbieta Podleśna, 51, an LGBT activist, was arrested more than two weeks after posters showing the icon of the Black Madonna of Częstochowa and her Son with LGBT rainbow halos were posted near St. Dominic’s Church in the central Polish city of Płock during the Easter weekend, the holiest time of the Christian year.

Offending religious sensibilities is a crime in Poland  ― appearing in Article 196 of the penal code  ― akin to disrupting the peace. Punishments can range from paying a fine, some limitation of liberty, or up to two years imprisonment.

According to Norbert Pęcherzewski, the chief of the District Prosecutor’s Office in Płock, the decision to detain Podleśna was made independently by police. In an interview with Poland’s TVN24, Pęcherzewski said that the prosecutor’s office had only wanted to search the woman’s apartment and car.

Podleśna was charged, questioned, and released.

Amnesty International, with whom Podleśna is an activist, released a statement saying that Podleśna was arrested after returning from “an advocacy tour.”

“Elżbieta Podleśna had just returned to Poland after completing an advocacy tour with Amnesty International in Belgium and the Netherlands raising concerns about the rule of law in Poland,” the organization wrote.

But according to the left-wing news website Na Temat, it was no accident that the copies of the “Rainbow Madonna” were posted up near St. Dominic’s Church.

“The Warsaw Freedom Activists had already earlier explained why they had conducted an action with the Mother of God of Equality in Płock,” wrote Łukasz Grzegorczyk in Polish.

“In a letter sent to the Na Temat editorial office, they wrote that the rainbow Mary, which they stuck to the walls and sidewalks near the church of St. Dominic, is supposed to be an expression of opposition to the stigmatization of non-heteronormative people by the clergy.”

The LGBT version of Poland’s most beloved icon was not the only slap to Catholic sensibilities in Płock. According to Polish news website Gazeta.pl, a decorative “Holy Sepulchre” at St. Dominic’s Church was found on Easter Sunday to be covered over with cardboard boxes bearing the inscriptions “”LGBT”, “gender”, “betrayal”, “lying,” and “theft”.

Poland’s Minister of the Interior, Joachim Brudzinski, voiced his displeasure with the misuse of the icon of the Black Madonna of Częstochowa. On Holy Saturday, he retweeted a Holy Saturday message by the Sanctuary of the Mother of God of Jasna Góra in Częstochowa, where the original icon is housed, expressing sorrow for the “profanation.”

“The profanation of the image of the Mother of God of Jasna Góra in Płock pains [us] greatly. We urge people, regardless of their beliefs and views, to respect the religious feelings of believers. Let's pray for the transformation of hearts and the conversion of unbelievers and enemies of the Church – appealed the prior of Jasna Góra,” read the Tweet in Polish.

In addition, Brudzinski said on Twitter that there could be no “consent” to this kind of “cultural barbarism.”

“… The image of Our Lady of Częstochowa, for centuries sacred to all generations of Poles, was profaned in Płock.  Police will deal with the matter as their duty. There can be no consent in the name of pseudo-tolerance to this type of cultural barbarism,” he wrote in Polish.

An American freedom of speech advocate was troubled by Podleśna’s arrest. Political philosopher Robert George compared Brudzinski to students at Vermont’s Middlebury College, where the student council recently threatened to disband unless they were allowed final say over campus speakers.

“The Polish Interior Minister's claim that people don't have a right to offend the feelings of the faithful makes him sound like a student at Middlebury,” he tweeted.

“Like them, he's dead wrong. People have the moral right to freedom of speech, even when their ideas offend others' feelings.”