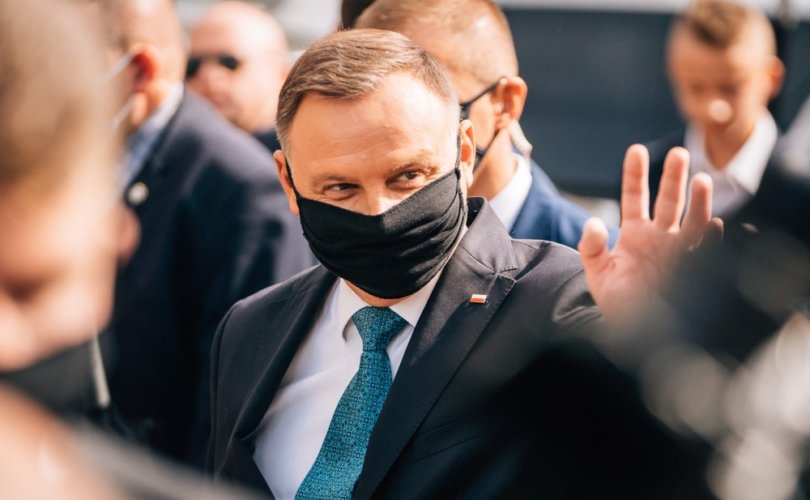 WARSAW, September 23, 2020 (LifeSiteNews) ― The President of Poland joined 5,000 people in a recent pro-life demonstration in Warsaw.

Andrzej Duda, 48, was one of the marchers on Sunday’s Fifteenth March for Life and Family, which took place despite the Covid-19 panic that has inspired lockdowns throughout Europe.  The President, recently re-elected after a campaign in which he stressed his commitment to the traditional Polish family, had been invited by the event’s organizers.

The motto of this year’s March for Life and Family was  “Let’s defend the family together.”

According to online Polish news magazine Polonia Christiana, the March “affirming family, life and love” was “sunny and joyful” and made special by the presence of the Polish president. It was the first time any President of the Polish Republic had taken part in the event.

“We are honored that President Andrzej Duda accepted our invitation and took part in the March for Life and Family,” stated  Paweł Ozdoba, the president of the Centrum Życia i Rodziny [Life and Family Center].

“We are happy that Polish families have the most important person in the country as an ally,” he continued.

“We trust that thanks to [Duda’s] political activity, the family, as well as  marriage as a union of women and men, will be protected on many levels.”

Also present at the rally were Barbara Nowak, the Superintendent of Schools for Poland’s Małopolska region, and Duda’s presidential challenger from the right, Krzystof Bosak of the Confereracja party.

The March began at noon in Warsaw’s Plac Zamkowy [Castle Square] and processed along Krakowskie Przedmieście, a central street, to the baroque Church of the Holy Cross. The demonstration had two themes: the need to protect the lives of unborn babies who can still be killed for eugenic reasons and the need to protect the family from “ideological threats.”

Almost 1,000 unborn babies in Poland are killed every year because they are diagnosed with serious disabilities, Polonia Christiana revealed. A Citizens’ Bill calling for the criminalization of the eugenic practice will be considered by the nation’s Constitutional Tribunal on October 22.

Poland’s relatively strict abortion laws also permit the destruction of unborn babies conceived in rape and incest. Besides this, abortions can be performed only when continuing the pregnancy endangers the life of the mother.

In recent years, the traditional, largely Catholic country has been challenged by a fringe movement, funded from abroad and supported by the European movement, that is attempting to spread LGBT ideology.

Duda’s far-left challenger for the presidency, Rafał Trzaskowski, created an LGBT “Card” (Charter of Rights) as Mayor of Warsaw. In July, LGBT activists desecrated a statue of Christ sacred to survivors of the Warsaw Uprising by gagging the figure and festooning it with the LGBT flag. LGBT activists have desecrated other national and religious symbols like the image of the Black Madonna of Częstochowa. In 2019 activist Elżbieta Podleśna was arrested m after posters showing the icon of the Black Madonna of Częstochowa and her Son with LGBT rainbow halos were posted near a church in Płock during the Easter weekend, the holiest time of the Christian year. Offending religious sensibilities is a crime in Poland, akin to disrupting the peace.

At times the LGBT attack on traditional Polish values has escalated to violence. In June, “non-binary” activist Michał “Margot” Szutowski attacked a vehicle owned by the pro-life, pro-family group and its driver.